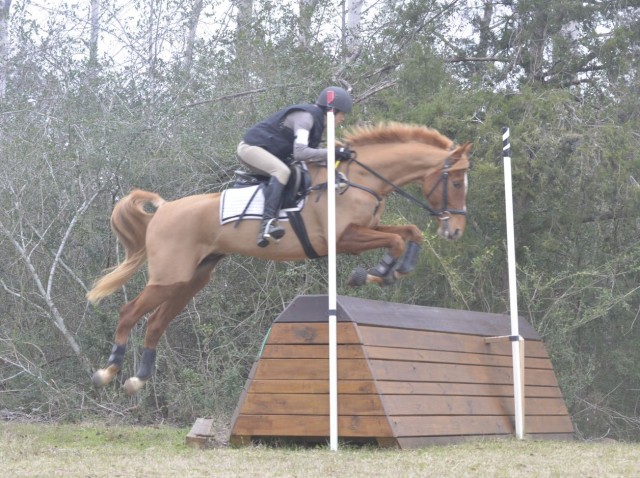 Lisa Bauman and Arvo during a Deborah Rosen clinic. Photo by Brandy Savarese.

American Saddlebreds can be traced back to the cavalry horses of the Civil War, progressing into the elegant breed they are today. Saddlebreds can commonly be found competing in the pleasure ring, but Lisa Bauman had a different idea when she first began her search for a Saddlebred of her own. “About eight years ago, some friends of mine and I were shopping for Saddlebred stud prospects to breed sport horses with,” Lisa said. “We were looking at foundation lines that weren’t super ‘up’ in the neck and that had free shoulders and good brains.” Her original plan was to infuse the Saddlebred breeding with Hanoverian mares to refine the warmblood build and retain the presence and temperment of the Saddlebred.

In stepped Giving You the Business, known around the barn as Arvo, whom Lisa purchased as a weanling with the intent of eventing him at some point. As a 2-year-old, Arvo displayed his jumping prowess by jumping from one arena into another from a standstill. Arvo, who is now 8, continued his training with Lisa and is now a full-blown event horse.

One challenge that arose when Arvo began his training was his conformation. Saddlebreds tend to be a bit longer in the back than what one would normally look for in a sporthorse, so Lisa utilized exercises to help him engage his hind end and use his back more in the flatwork. “He’s not as ‘type-y’ of a mover,” Lisa said. “The dressage is where we have really seen the breeding differences come up, as his movement tends to be more up front, and we’ve had to work to get his hind end caught up with his shoulder. He has a shorter stride, so we’ve also worked on lengthening his stride.”

Jumping has proven to be no issue for Arvo. “He took to jumping like he’s been doing it his whole life,” Lisa said. “Cross country is so nonchalant for him; he was just so impressive.” Lisa has observed many Saddlebreds that are natural and exceptional jumpers. “I actually think for some reason that Saddlebreds just love to jump. Because of the way their hind end is structured, you can really get them to sit back and use themselves over fences. It’s like they’re spring-loaded.”

Arvo’s intelligence has also helped him succeed as an event horse. Lisa commented on his mental capacity, saying that he will stand in the warm-up and watch other horses go through their rounds. “His mental capacity is what I think really sets him apart,” Lisa said. “When you interact with him, you can feel him processing everything.” For that reason, moving Arvo up through the levels has been easy, and he competed at Training level in 2013 with the ambition to move up to Preliminary this year. “The harder it gets, the smarter he seems to get,” Lisa said. “The goal is to qualify for a one-star later this year and make the call after that on where to go from there.”

Around the barn, Arvo is “a lab trapped in a horse’s body.” Definitely a barn favorite, Arvo displays great ground manners and an outgoing personality. Lisa is an advocate of Saddlebreds as sport horses and hopes Arvo can continue to be an ambassador for the breed. “People know he’s a Saddlebred at shows,” Lisa said. “He always draws attention with his glowing chestnut coat and flaxen mane and tail.” Eventually, Lisa hopes to revisit her plans to breed Saddlebreds with some warmblood influence to create a new generation of elite sport horses.