We're thrilled to have Pan American Games athlete and Athletux rider Lauren Billys blogging from Toronto as she competes in eventing as an individual for Puerto Rico. EN's live coverage of the #PanAmGames starts Thursday with the first horse inspection. Follow Lauren Billys Eventing on Facebook for more updates from Toronto. 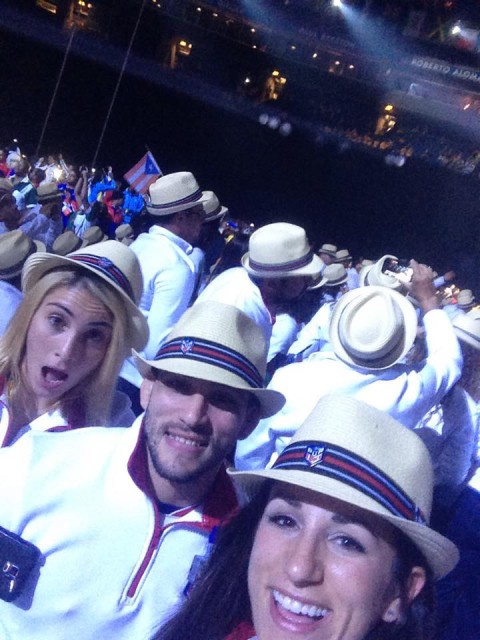 Lauren celebrates with the Puerto Rican judo team at the opening ceremony.

It was one of those moments. The kind you want to freeze and squeeze out every bit of its essence. The kind of time that has an importance you can’t fully grasp until you walk away, drink a cup of coffee and analyze the meanings behind each detail. The Pan American Gams Opening Ceremony contained every piece of that.

Meeting the many people that make up my delegation was only the first part. After months of emails with faceless names, I finally met the people who make up the administration of Puerto Rico’s Olympic Committee. These people not only did everything they could to get me to realize my dream of attending the Pan American Games in Toronto, but they also knew me from my Facebook, results and online videos.

My delegation has spent so much time helping me get to this place, so getting the chance to put a face to each person who made a personal effort to get me here was touching. I also had the opportunity to meet some of the people who make up the 250 athletes that represent Puerto Rico.

All of this combined with the fact that we were named the best-dressed delegation gave me so much pride and confidence walking to the opening ceremonies. What an amazing group of people that I have the humbling opportunity to be a part of.

We entered the stadium after a few hours of long lines, perfecting Puerto Rican chants and dancing. We finally came to our moment to enter the stadium. There is something about walking into a sold-out stadium with a team of people that you are proud to be a part of and being part of an experience that has no price tag.

It is a feeling you can only truly understand by being a part of that moment — a moment where I truly can say I was living in that place in time solely. Nothing else occupied my mind or heart but the preciousness of what I was experiencing.

When we arrived to our (front row) seats on the floor of the stadium, the show produced by Cirque du Soleil began. It was a wordless ceremony of unimaginable acrobatics, BMX bike flips over top of the athletes and novel music. The performance was one of a kind and unforgettable.

Great shots of the Puerto Rico at opening ceremonies!

I found that my friends sitting around me were often gasping at something I hadn’t even seen yet that was happening on a different part of the stage from where I was looking. I only wish I had more time to see each detail of what was unfolding in front of us.

Again, I was reminded of the meaning that is woven into every facet of these games: unity. Each athlete from a different sport, place in life, home country, and history come together for the purpose of uniting over sports and the many things sporting has taught us in life thus far.

We get the chance to spend time with people we would otherwise never meet building relationships of a lifetime and have the opportunity to find out details about our souls that will change us forever. In the time of watching the torch be lit and listening to the speeches of those who make these games possible, I resonated with the overriding theme to live in the moment and thrive in the present.

Moments like opening ceremonies give me inspiration for the competition ahead this week and motivation for the future. I feel honored to be in this place again and commit to letting this time sink in and cherish each part of this journey.