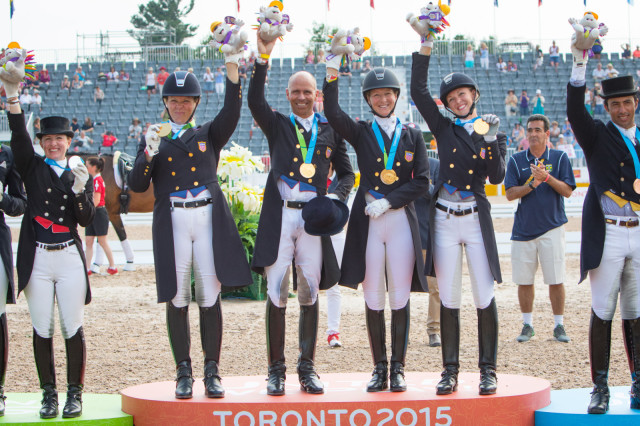 Equestrian fans were disappointed that there was no live stream of Team USA winning dressage gold over the weekend. Photo courtesy of StockImageServices / FEI.

Eventing fans have been searching for answers as to whether the Pan American Games will be streamed live online later this week, and USEF CEO Chris Welton released a statement today clarifying that there will be no live stream of the competition.

The Canadian Broadcasting Corporation (CBC) was awarded the bid for the sole broadcasting rights to all the sports at the games and has elected only to film show jumping on July 21, 23 and 25. ESPN3 will air that show jumping coverage here in the States (check your local listings for times).

There will be no film coverage at all of eventing and dressage, which is already under way. Additionally, all media outlets are prohibited from posting any videos of the competition online due to the exclusive nature of CBC’s broadcasting rights.

“Please understand that the USEF would do anything it could to stream or facilitate the streaming of all equestrian events at the Pan American Games. We just do not control production, and broadcast rights for each country are sold in total, not by sport. ESPN is broadcasting what gets produced,” Chris said.

“The good news is that for the Olympic Games in Rio, NBC has committed to stream all 5,000+ hours of competition, and I believe that as streaming evolves the Pan American Games will get to the same point before Lima 2019.”

It’s extremely disappointing not to have a live stream, but we will be bringing you the best in every other form of media possible, so don’t forget to use EN as your #PanAmGames headquarters starting Thursday with the first horse inspection.