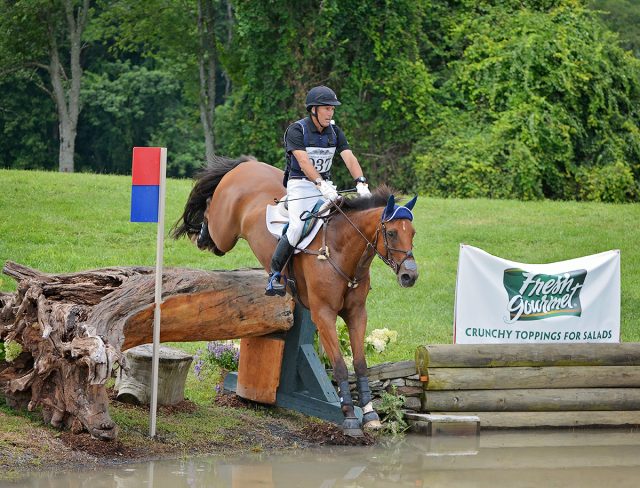 While the International levels had their fun on Friday, the action was still in full swing with four Intermediate divisions in the Pine Top Farm Advanced, CIC2*, CIC* and Horse Trials this weekend.

Kevin Keane and his own Sportsfield Candy made massive strides up the leaderboard to end up on top of the Intermediate A. The 11-year-old Irish Sport Horse scored a 36.9 on the flat for 15th, then jumped to 7th after show jumping and ultimately first after a double clear cross country round. A stellar start to their season at the first event back since their top 10 finish at Fair Hill last fall.

Second place belongs to Jacob Fletcher and Fletcher Farm’s Atlantic Domino. The 2015 USEA Adequan Gold Cup Champions started on a 32.2 and picked up 4.8 time penalties for a final score of 37.

Bennett’s Creek Farm’s Woodstock Bennett also started off his season on a high note with Ryan Wood in the tack picking up third place. 34.7 on the flat and four cross country time penalties gave them a three-phase score of 38.7.

The striking grey Bentley’s Best was the big winner of the Intermediate B division with Jessica Phoenix in the saddle. The 11-year-old Trakehner owned by The Bentley’s Best Group added just 1.6 time penalties to his sub-30 dressage score to finish on 27.8.

Courtney Cooper and Who’s A Star, a 15-year-old Irish Sport Horse/NZ Thoroughbred owned by Courtney & Neal Camens, followed in second. This pair kicked off the weekend on a 27.8 finishing cross country nine seconds over optimum time for a final result of 31.4.

Waylon Roberts and Ashley Macvaugh’s Born Ready snapped up third place on 32.6 points. The 9-year-old Thoroughbred had one rail down and 1.2 cross country time penalties for his top three position.

Therese Evans took home blue in the Intermediate Rider division with her own, Lynn Giltinan and Sarah Cherry’s Clover Joe. Starting their second season at the level, this pair earned a 32.2 in in the first phase and added only four cross country time penalties for a weekend result of 36.2.

Marley Stone Bourke piloted her own LVS Dassett Charisma to second place in this class, finishing squarely on their dressage score (40).

Third place belongs to Alex Reed and her own On Broadway. The 11-year-old Thoroughbred had two poles down after a dressage score of 35.7.

Sophie Click was the final Intermediate winner with her NAJYRC partner Fernhill Rising. Fresh off a top three finish at Pine Top’s Preliminary two weeks ago, these two earned a 34.8 in the first phase, had one rail down and a handful of time penalties for a final score of 40.4.

Alexa Gartenberg followed in second with her own Patras VR in their second start at the level. They  had one rail and 6.4 cross country time penalties for a final mark of 48.7

Kaelen Speck rounds out the top three with her own Sweet Rebellion. Two rails down and a handful of time of cross country gave them a final score of 49.2.

It was a sun shine and blue sky weekend in Georgia. Congratulations to all those with successful rides this weekend!