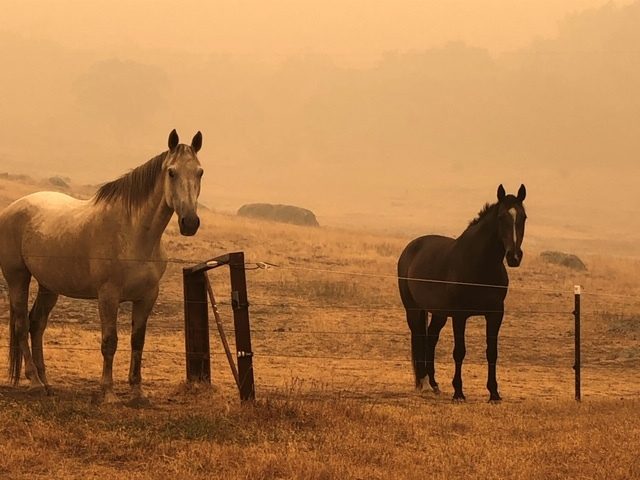 Devastating bushfires continue to burn in Australia as two of the largest blazes merged into one Thursday night, creating a new “megafire” that spans 1.5 million acres. The death toll has risen to include at least 25 people, and at least 14.5 million acres have been destroyed. The University of Sydney has estimated that up to 1 billion animals have been affected or killed by the blaze.

Many Australian eventers have suffered from the summer bushfire, including five-star eventer Megan Jones, whose Hallmark Farm facility burned shortly before Christmas. In an effort to aid the affected equestrian community, a fund, The Equestrian Fire Relief Australia fund was launched fundraise for emergency relief.

Australian Olympic gold medalist Andrew Hoy has been especially supportive of the initiative. “To see my home country going up in flames, to see the suffering of people, wildlife, and all other animals is just devastating. I have received so many messages from people suffering losses across the affected areas and I am heartbroken for all of them,” he said.

“The Australian Equestrian Community so urgently needs the help of the international equestrian community – financially, but also morally! I hope with this campaign we will be able to make a difference, show our support, and get much-needed finances to the people affected.”

Phillip Dutton and Boyd Martin have also extended support and heartfelt messages to their home country.

“For anyone that has horses in their life, they can truly understand the absolute devastation that is being felt by the fires in Australia. There is an absolute helpless feeling across a sunburnt country. I have personally been through the horrors of fire, and it is something that can truly destroy the spirit. In my experience, the only thing that kept me going was the support of the equestrian community that is worldwide. I urge anyone to contribute to this heartfelt fund.” Boyd said.

Fundraising is the EFRA’s primary goal, but they also have hopes of providing moral support during this distressing time. All funds raised by the EFRA will be dispensed via local emergency and recovery committees in Australia.

Based in Canberra, Jocelyn King, a Canberra local equestrian, will act as the EFRA Coordinator supported by volunteers nationally and internationally along with Kiah Consulting and Kiah Equine and the Advisory Board for the Fund, John Glenn (Chairman), Mike Etherington-Smith, Stuart Tinney, and Stefanie Hoy.

How You Can Help

Want to help with the rehabilitation of wild animals? WIRES Wildlife Rescue is on the ground helping injured wildlife, while WWF Australia has pledged to restore the homes of koalas, giving the species a chance of survival. Finally, the Australian Red Cross is providing emergency relief for those affected by the devastation.