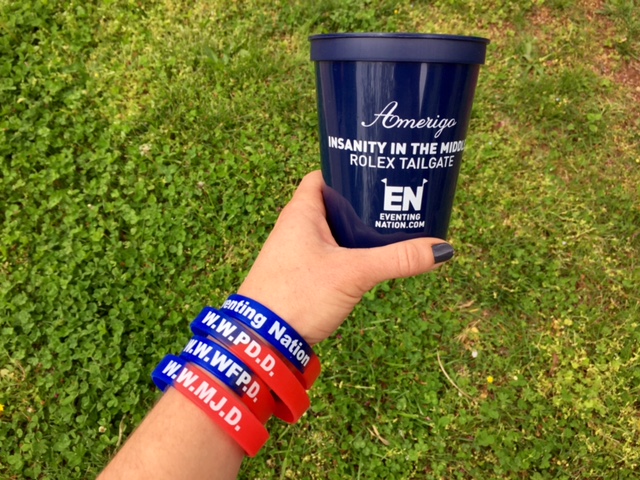 What would past Rolex Kentucky Three-Day Event champions William Fox-Pitt, Michael Jung and Phillip Dutton do? If they weren't so busy winning 4*s, we think they'd be down for some tailgating. We can't wait to reveal what we've got up our sleeves (besides bracelets) for this year's edition. Photo by Leslie Wylie.

Are you ready to get your insanity on? That’s right, EN — the 4th annual “Insanity In the Middle” Rolex Tailgate Party, presented by Amerigo, is going to be bigger and better than ever!

This tailgate party is our favorite way to show our appreciation for our readers, who are truly the best in the land. So come on out on cross country day, April 30, to enjoy some snacks, adult beverages, free EN swag — and the best Rolex tailgate party on course! 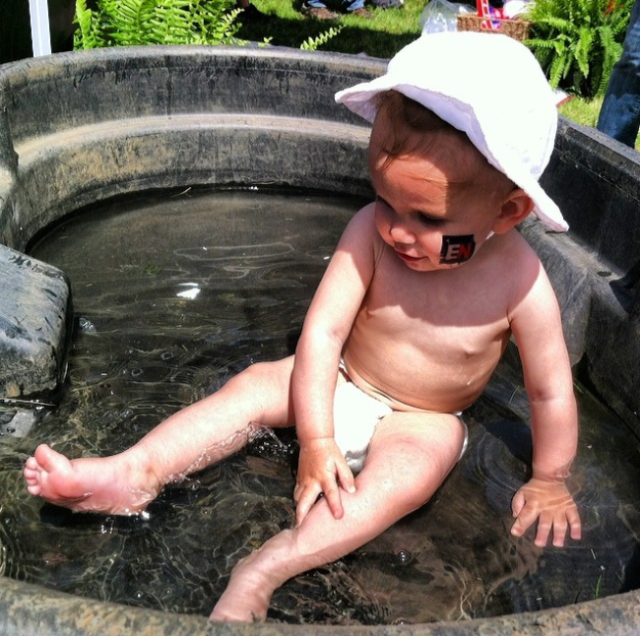 All the fun for all ages! This year we’re giving away EN onesies to EN’s tiniest eventers — stay tuned for details! Photo by Leslie Wylie.

Here’s all of the info you need to know:

What: An all day, ridiculous party on the Rolex cross country course. We’ll be taking in the action while partying it up with our readers. Expect infamous EN tailgate traditions like Rolex Trivia, to be hosted this year by our friends Glenn the Geek and Jamie Jennings from Horses in the Morning; contests and giveaways featuring limited edition 2016 EN Rolex tees, world-premier EN coozies, and products from World Equestrian Brands; celebrity appearances including The Real John Thier and live performances by Chinch and the Chillas; and much, much more.

When: Saturday, April 30, from when the first horse leaves the start box (usually around 10 a.m.) until the last horse crosses the finish line.

Where: Tailgate spots B161 and B162 — check out the tailgate spot map here. We’ll give you a better landmark (“to the right/left of jump #x”) once we get set up, so be sure to follow EN on social for all the latest updates.

We’re looking for a few good EN friends to give us a hand with hosting — there are mimosas to be mixed, temporary tattoos to be applied, and Chinches to be body-guarded. If you can commit to working a two-and-a-half hour shift (9:30 a.m. to noon, noon to 2:30 p.m., 2:30 to 5 p.m.) we’ll hook you up with a day pass plus a gift bag and lifetime supply of EN karma.

Have a brother/boyfriend/husband in tow who wouldn’t mind being dropped off at EN’s tailgate for an hour? (Selling points: free beer and cookie cake!) We’re in the market for a few good dudes for a secret, to-be-announced project.

Email Tailgate Hostess with the Mostest Leslie Wylie at [email protected] if you can help us out on either front!

Scenes from the 2015 tailgate: 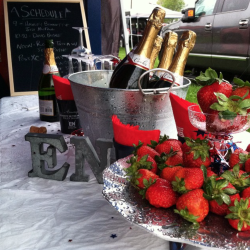 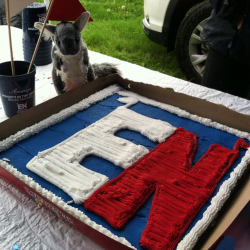 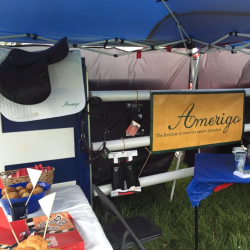 Many thanks to this year’s EN Tailgate Party sponsor Amerigo. Props also to Megan Moore and Team CEO Eventing, Practical Horseman magazine, and our volunteer bartenders/tattoo artists from the UK Equestrian Team. And an extra special thanks to the amazing mom-daughter Jansen duo — couldn’t have done it without you. Photo by Leslie Wylie. 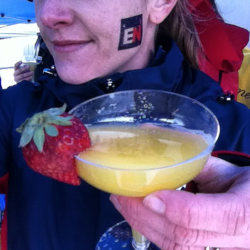 “Hello, and welcome to the EN Tailgate Party. Can we get you some champagne? A new tattoo?” Photo by Leslie Wylie. 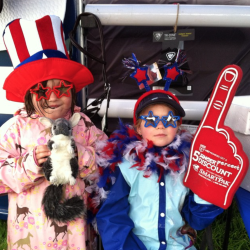 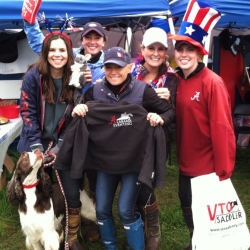 The Alabama Intercollegiate Event Team stopped by to party with Hawley Bennett. Photo by Leslie Wylie. 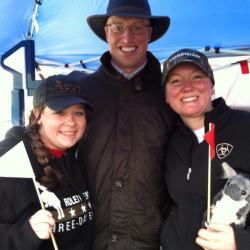 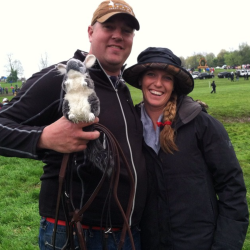 The dramatic finale of EN Tailgate Rolex Trivia: an Amerigo bridle giveaway, the winner to be determined by a “chinch toss” (think “bouquet toss,” but with a chinch.) David Taylor caught and ruthlessly wrestled the chinch to the ground — nice work, David! Many thanks to emcee Jess Payne and sponsor Amerigo! Photo by Leslie Wylie. 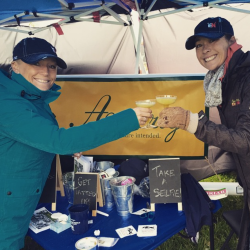 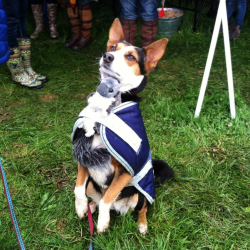 It’s official: the EN Tailgate Party has gone to the dogs. Photo by Leslie Wylie. 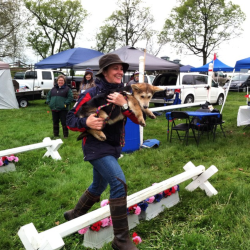 Jimmy called this pair out for “unauthorized assistance.” Photo by Leslie Wylie. 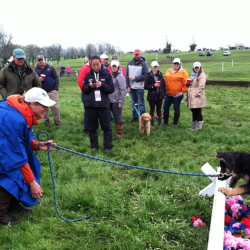 Some of the greener jumping prospects found the brush boxes a bit spooky. Photo by Leslie Wylie. 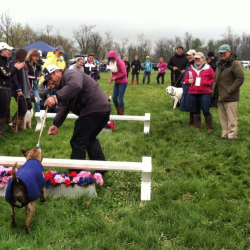 There were some green eventing prospects in the Jimmy Woof-ford Canine Gymnastic Jumping Clinic who needed a bit of encouragement. Photo by Leslie Wylie. 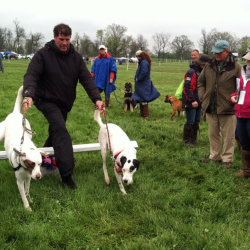 A few dogs in Jimmy Woof-ford’s Canine Gymnastic Jumping Clinic cantered through the grid like schoolmasters, earning a nod of approval from Jimmy. Photo by Leslie Wylie. 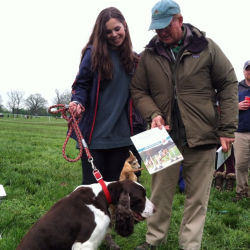 The “Best Style” award winner earned an autographed copy of Jimmy Wofford’s iconic gymnastic jumping manual and DVD, courtesy of our friends at Practical Horseman who partnered with us for the event! Photo by Leslie Wylie. 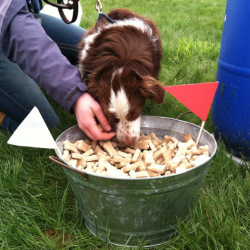 Clear jumping round or not, everyone deserved a biscuit. Photo by Leslie Wylie. 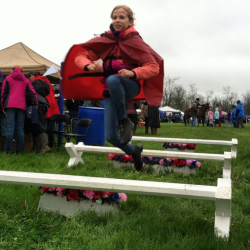 What horse-crazy kid could resist the urge to do this? Or, for that matter, what horse-crazy adult — especially if they’ve been hitting EN’s open bar. Photo by Leslie Wylie. 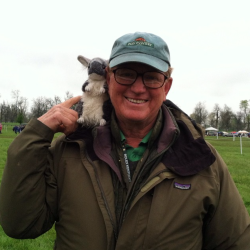 We’ll post a schedule of the fun for you in the days leading up to the party of the year. Until then, mark your calendars and get your party pants on, EN! We’ll see you on course.