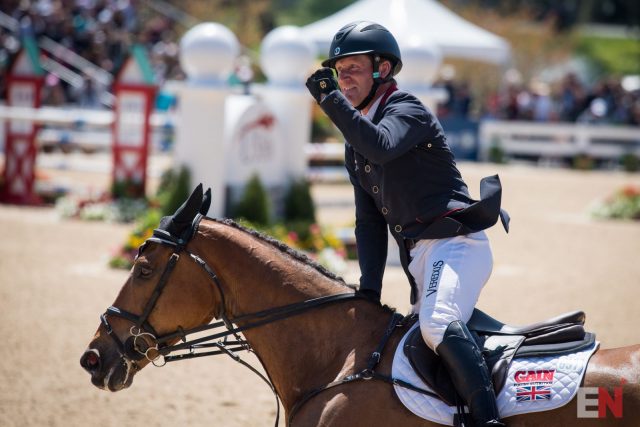 The Land Rover Kentucky Three-Day Event is upon us! With the dressage off and away this morning, the EN team is ready to make our picks for horses and riders we think will stand out in six categories: Big Winner, Top American, Top Canadian, Spoiler Alert, Top Thoroughbred and Best Mare. (EN’s data analyst Maggie Deatrick also went rogue and added two of her own categories.)

Big Winner: Boyd Martin and Tsetserleg. I’m going all in for an American this year, and who better than Boyd and “Thomas.” I should add this is not data-based in any way, I just think last year’s WEG might be a powerful motivator!

Big Winner: For me, there’s going to be a three-way battle for the win: we’ve got last year’s winner in the mix, the incredible Quarrycrest Echo, piloted by Piggy French, and, of course, Burghley winner Tim Price, who brings forward Xavier Faer. I know Jenni’s money is on Piggy, and I’m ALL about the #YearOfThePig, but just to mix things up a bit, I’m going to say that Tim takes it and sets himself up for a Grand Slam attempt the following week at Badminton. ‘Hugo’ might fly under the radar in comparison to some of the other Price horses, but he was third at Badminton in 2017 – and the extra prize pot the Grand Slam provides would buy baby Otis one heck of a first pony.

Top American: Deniro Z is the classiest horse Liz Halliday-Sharp has ever had at the upper levels, in my humble opinion, and both are very capable of producing the goods. This will be a second five-star for the eleven-year-old gelding – he went to Luhmühlen last year and finished eighth in a hot field. He was also fifth in Blenheim’s eight- and nine-year-old class a couple of seasons back, so he’s proven that he can take on the big boys. He beat the likes of Vassily de Lassos and Oratorio there. I’d LOVE to see these guys win it, and they could well do, but they’ll certainly be my pick for the best American finishers.

Top Canadian: Anyone who knows me knows that I’m a huge fan of feisty, pocket rocket mares, and Hawley Bennett-Awad’s Jollybo totally ticks all my boxes. She was twelfth here in 2017, and although last year’s run (and the WEG) didn’t go quite to plan, I think this horse has an even better result in her. I’m also a bit biased – she was sourced for previous rider Justine Dutton by British eventer Kate Tarrant, with whom my horse and I are based, and Jollybo is a Jumbo baby, while mine is a maternal granddaughter of the stallion. Just because I’m a professional, that doesn’t mean I need to base all my decisions on logic and stats, right?!

Spoiler Alert: Tsetserleg had a bit of an unfortunate WEG – he and Boyd Martin picked up 20 penalties across the country after they fell victim to the bogey boat. But they’ve come back this spring and conquered it, winning the Fork CCI4*-S at Tryon in the process. A (literal) dark horse win here would be a brilliant final piece of the redemption arc, and a big Boydo win would give all of us at EN a chance to share the most embarrassing photos we’ve got of him on the open threads. That would be something truly special.

Top Thoroughbred: I’m looking forward to watching Australia’s Hazel Shannon and Willingapark Clifford. They’ve already won twice at this level – in fact, they’re the only pair to take the title at Adelaide on two occasions – but this will be our first time seeing them outside of their home country. Adelaide and Kentucky are very different tracks, but this is a seriously plucky pair, and Hazel is determined to do big things. She took over the ride on Oliver Townend’s Badminton runner-up Cooley SRS over the winter.

Best Mare: My favourite mare in the field is Celien, ridden by Hallie Coon. They travelled to Pau for their first five-star last season and absolutely blossomed under the pressure, delivering an enormous PB in the dressage to sit in the top ten after the first phase. It was a strong field, too – they eclipsed the likes of Bettina Hoy and Designer 10, which is pretty staggering, all things considered. They had to relinquish their hold on a top placing on cross-country day, when they added a fair few time penalties – but they produced a classy clear round, and Hallie learned a huge amount about fitness at this level. She’s been working hard over the winter and CeCe is looking the best she ever has. My money is firmly on these two to be seriously impressive this week.

Big Winner: I’m of the strong opinion that come Sunday morning, it’ll be down to the wire between the two Brits coming from abroad: Quarrycrest Echo and Cooley Master Class. A rail will spell a loss for either one of them but if they both jump clear, I think we’ll see Piggy French atop the podium with Oliver Townend right behind her.

Top American: Predicable, I know, but my money is on Phillip Dutton and Z. This horse’s jumping record is pretty impeccable and despite a light competition season this spring, his dressage seems to be just as on track as it was before WEG. I’m not sure he can catch the British invaders yet but sealing the deal on the USEF 5* Championship should be a good consolation prize.

Top Canadian: Colleen Loach has been chipping away in the background with Qorry Blue d’Argouges for a long time now, and the consistency these two have is a credit to their partnership. Colleen will have a chance to take a risk this year with the speed on cross-country day, as this is the pair’s first 5* where they don’t need to worry either about the team or qualifying for a team.

Spoiler Alert:  Tim Price and Xavier Faer will either be right at the top battling it out for first or they won’t factor into the top twenty. This pair is one of the fastest in the field at the CI*-L format, having made the time in three of their four clean 4/5*-L runs. The fourth time they were only four seconds over time. But they’ve only had one clean run in three 5* attempts so it’s a make or break weekend for Xavier Faer.

Top Thoroughbred: Erin Sylvester’s ride Paddy the Caddy has shown so much consistency at the CI*-L level in all three phases. The biggest question of the weekend for him will be the jogs, but if he stays injury-free this weekend then he should have no trouble achieving the mantle of top Thoroughbred.

Best Mare: Celien is the clear stand-out in the top mare category, but the biggest question mark for this horse is her fitness levels. Hallie Coon has really blossomed in the dressage and stadium phases since spending the majority of last year overseas with Celien. She did a stand-up job of nursing the mare home last fall at Pau after Celien ran low on steam in their first 5*. Now they are back for a second crack with a horse who has more of a baseline fitness for this level.

Top First-time Horse: I made up a category because I simply have to call out Islandwood Captain Jack. Caroline Martin has brought this horse up the levels over the years and his jumping form cannot be faulted. He has never had a stadium rail at A/4*, ever. With the reduced emphasis on stadium time penalties (now only 0.4 penalties per second) and reduced emphasis on dressage, there’s a great chance that this horse could rocket up the ranks and finish well inside the top ten.

Exceeds Expectations: Liz Halliday-Sharp has been on absolute fire this spring and while the numbers are telling me that she and Deniro Z achieve a top ten finish, it’s easy to make the argument that this pair could achieve much more. There are two big question marks for me for Deniro Z: his fitness to put in a fast time at the CI*-L level and his ability to leave all the rails up on the final day. At Carolina, this horse put in the fastest round of the day and made it look easy; it’s clear he is the fittest he’s ever been. If that translates to an 11 minute course and then leaves him enough gas in the tank to put in a clear round on Sunday, he could contest for a top spot against our foreign invaders.

Big Winner: Oliver Townend and Cooley Master Class obviously have a real edge here being last year’s winners, HOWEVER, I think that the motivation of the Grand Slam is going to help boost Tim Price and Xavier Faer to the top of the podium. We haven’t seen this horse’s name come up much on the world stage, but he’s actually got some quite good finishes on his record including a 3rd place finish at Badminton in 2017. That’s nothing to sniff at! Tim also spent some of the winter doing pure show jumping with this horse so that’s sure to come in handy for the final phase. Honestly though, I’m just a huge Tim Price fan and I truly love the way he rides and in particular I really love his elbows, seriously, watch them. They are SO SOFT.

Top American: I think it’s going to be a battle between Phillip and Boyd for this title and I think Boyd is going to take it this year. Not that I don’t think Z is absolutely super, but I remember watching Tsetserleg run around Kentucky last year thinking what a smooth, impressive round it was for the horse’s first five-star. Boyd has said that the horse feels more seasoned now so I’m excited to watch them this year!

Top Canadian: Toss up between Colleen Loach and Qorry Blue D’Argouges and Hawley Bennett-Awad and Jollybo for me, but I’m going to go with Jollybo because I can’t help but root for a little mare that could.

Top Thoroughbred: I’m super intrigued by Australia’s Willingapark Clifford and Hazel Shannon, and if they don’t come out on top as a ‘spoiler alert’ then I at least am going to pick them for top Thoroughbred. This is a really experienced pair: they have two five-star wins at Adelaide along with a host of CCI4*-S wins in their native Australia.

Best Mare: We only have four to choose from this year! I like Hallie Coon’s Celien for this title because she had a pretty fabulous showing at Pau last year.

As caboose of this crazy train and a contrarian by nature, this year I’m refraining from picks and simply wishing every last horse and rider a safe, happy 2019 Land Rover Kentucky Three-Day Event. Let’s do this thing. Go Eventing!

This post was edited to reflect my inability to distinguish between a mare and a gelding! – Shelby