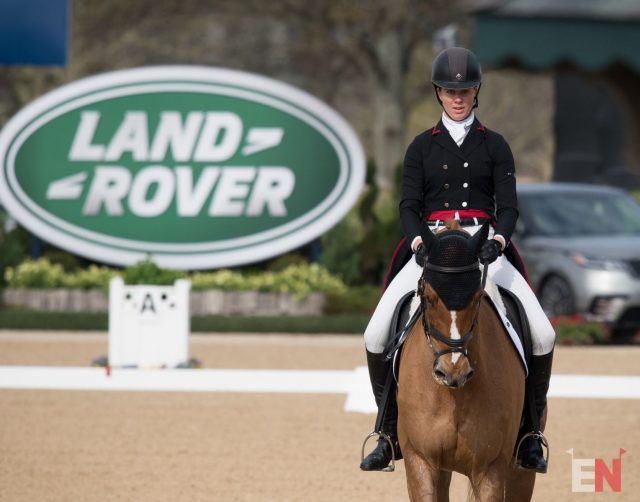 The Land Rover Kentucky Three Day Event is a go, party people! We’re just moments away from the commencement of the first session of dressage, where some of the crowd favourites will be battling it out to take an early lead in this year’s event. Click here to find out about some of the heavy-hitters in this session, courtesy of our stats queen, Maggie Deatrick.

Caroline Martin and Islandwood Captain Jack will be our first pair to take to the centreline at 10.00am – you can watch all the action as it happens via USEF Network. Our very own Jenni Autry will be on commentary duties alongside the marvellous John Kyle – but if you can’t sneak the livestream open at work or school, never fear! We’ll be bringing you everything you need to know as it happens right here – so keep your finger on the ‘refresh’ button and get ready for go-time!

Team @equistro_worldwide representing. Huge thanks to all my sponsors. Lillian and I will be doing a course walk at 12:00 noon Friday. Please join us! Leaving from the start box at noon. Remember to wear comfortable shoes.

We're excited to see Caroline Martin’s Dressage ride! If you're one of the first 200 to meet her at 12pm on Friday at the first water jump on course, fence 5, you'll get a free gift bag from SLT and Mane N’ Tail! #LRK3DE @carolinegmartin

What’s life like as a Technical Delegate at Kentucky? Find out at the USEA’s Event College:

Need a little bit of inspiration? How about some BIG, SHINY TROPHIES: 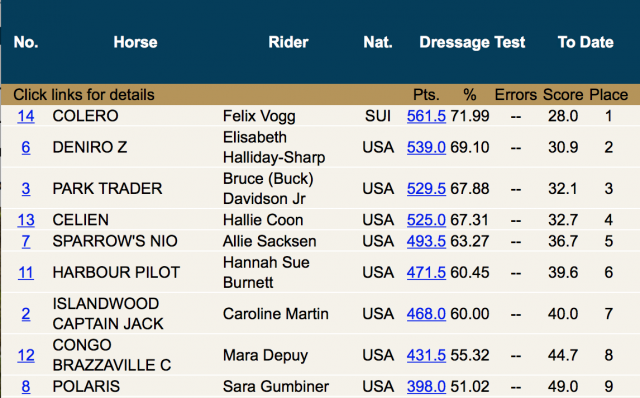 That’s it for the morning session of dressage here at the Land Rover Kentucky Three-Day Event! We’ll be back at 1.00 p.m. with live updates from this afternoon’s session. Catch you on the flip side!

One for the Celien fans among us – she and Hallie scored a 32.7 and sit fourth at the moment. This combination will certainly be ones to watch on Saturday! 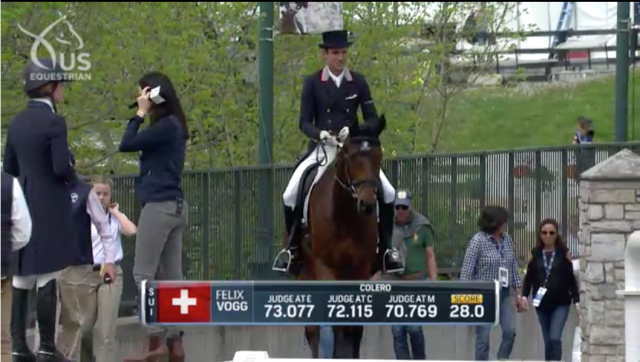 Felix is quite fanciable, all things considered. Not least because he’s just gone into the lead on 28.

Felix is using his space very, very well – he makes the most of every corner and every last inch of arena to set Colero up for the more difficult movements. Very educational.

We’ve had a morning full of American competitors, but now we have a representative of Switzerland – Felix Vogg and Colero have begun their test.

It won’t eclipse their Pau result, but Hallie Coon and Celien head into provisional third place currently. Standby for score.

A tiny bit of disobedience as Celien anticipates the upward transition out of walk, but some beautiful work shown in the canter extensions. They aren’t as brave as Buck’s, but they’re safe and accurate.

Celien is one of only four mares in the field this year, and as John Kyle says, she could be one of the very best. Historically, this hasn’t been the easiest phase for this pair, but Hallie has been working hard with David O’Connor to eke out the extra marks – and their spate of recent upper-20s scores prove it.

It’ll be a 44.8 for Mara and Congo. Next into the arena is Hallie Coon and her mega-mare Celien. They delivered a sub-30s score in their first five-star last year – can they do it again?

It won’t be the result that Mara will have hoped for – Congo bubbled over in the big atmosphere in the main arena, and we saw Mara do very well to keep him on side as best as possible. Onwards and upwards!

Congo is feeling a bit exuberant – he throws his head in the trot half-pass and picks up canter three times. Mara has coaxed him back into trot now, but she’s having to ride him conservatively.

“I didn’t necessarily think I’d ever be back here again,” says Mara DePuy. “And who wouldn’t want to be riding Congo?”

Congo Brazzaville C and Mara are about to begin their test.

Some expensive breaks in the lateral work for Hannah Sue and Harbour Pilot. They score a 39.6 – off the pace of their five-star PB of 29.8.

Of all my years at @KyHorsePark for @KyThreeDayEvent this is my first Thursday dressage! This year I won’t miss a single ride! #LRK3DE #bestweekendoftheyear pic.twitter.com/ctuJctxWHZ

Make a wish! Some tension coming through in Harbour Pilot’s test – Hannah Sue will be wishing for clean, calm changes.

Hannah Sue Burnett is in the ring now on Jacqueline Mars’ Harbour Pilot. MARS, Incorporated are one of the key supporters of this year’s event – without fantastic sponsors and partners, competitions like this just can’t happen.

“I’m so excited to see you jump; I watched you on the ⁦@USEFNetwork⁩ live stream last year” Sarah Gumbiner meets & greets Polaris’ & her fans 😍 pic.twitter.com/vM27AoXoUf 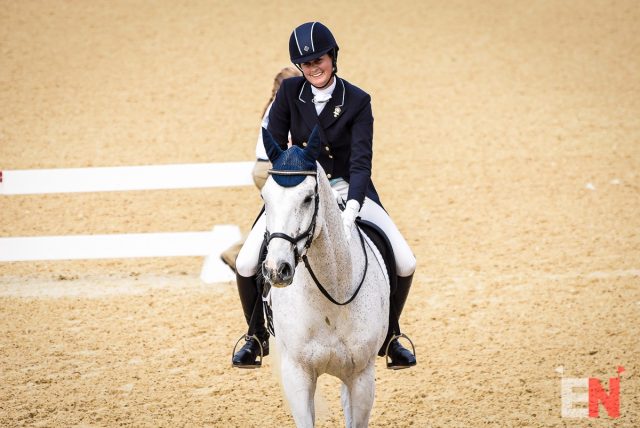 Allie Sacksen and Sparrow’s Nio after their dressage, which earned them a PB of 36.7. Check out that Pony Club alumnus badge, too! Photo by Shelby Allen.

Heading to Kentucky this week? Need something to read while you’re waiting for the next test? Check out our must-do guide for the Thoroughbred super-fan.

The Thoroughbred Superfan’s Guide to #LRK3DEhttps://t.co/XM2gJVMmkW 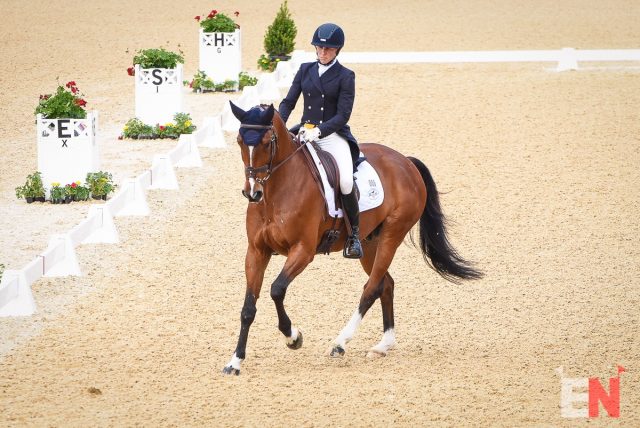 An interesting factoid from EN’s Maggie Deatrick – last year, we only saw four tests with a differentiation of 5% plus between judges. Liz Halliday-Sharp’s test with Deniro Z has a 7.69% differentiation, which is bigger than last year’s highest of 7.42%. As of this year, a differentiation of more than 3% in the flying changes will warrant a video review by the ground jury.

A little look at 17.2hh Polaris – we can’t help but think that this horse will produce a seriously smart test one day. #legs4dayz 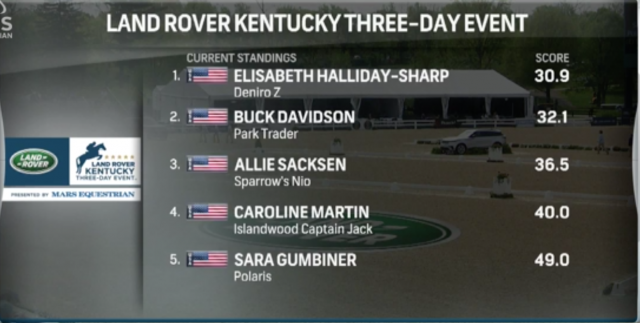 Here’s your leaderboard from the first half of the first session – you can follow along with live scores here! Our next rider will be Hannah Sue Burnett, who comes forward with Harbour Pilot at 11.08 a.m. 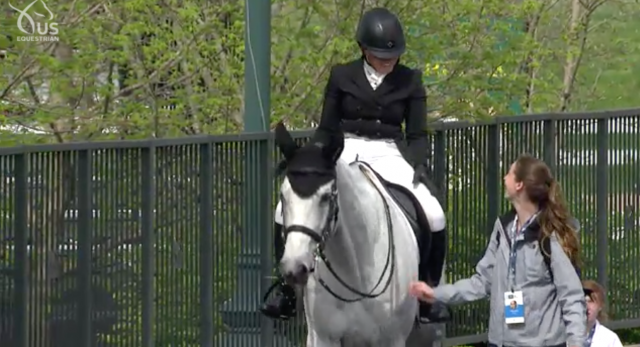 Who needs reins anyway? Polaris is cool and calm – once he leaves the arena.

It’s a 49 for Sara Gumbiner and Polaris, but they’re not here to win this phase. At the first drag break, Liz Halliday-Sharp and Deniro Z lead on 30.9.

Oh dear – Polaris looks set to explode in the changes. Really nice job by Sara, who isn’t rising to it at all. Lots of big pats for Larry as they leave the arena. Now, of course, he’s relaxed as anything – typical!

Some tension creeping in in the canter work, but Sara knows this horse so well – she’s gently coaxing him through, and he’s beginning to snort and exhale as he responds to her aids.

Another gorgeous grey in the ring, and this time it’s the stunning, leggy Polaris, ridden by Sara Gumbiner. We saw this pair deliver a clear round last year on their Kentucky debut – this can be a tricky phase for this sharp Irish horse, but he’s holding it together at the moment. He’s a classic leaderboard climber, but Sara will be hoping to make some early headway. 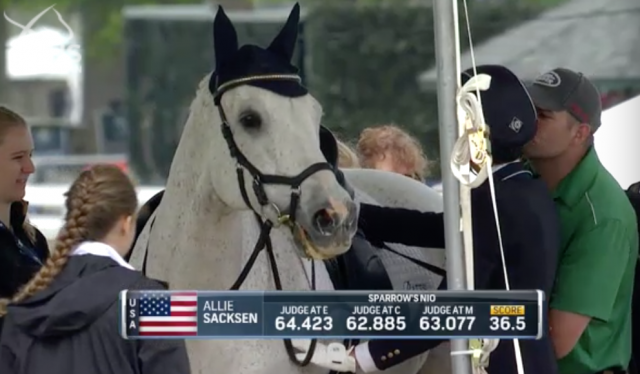 A personal best at this level for Allie Sacksen and Sparrow’s Nio! They score a 36.5 and enjoy a backstage celebration.

“I thought the trot work was some of the best he’s done – I really tried to ride every part of that test as best I could,” says Liz, chatting to Jenni. “We know the changes are difficult for him – we hoped he could make it into the twenties, but he tried his guts out, and I couldn’t be happier with him.”

Liz’s score has been slightly changed and confirmed as 30.9.

It’s tough, as Marilyn points out, if you’re on a horse like Nio – he can perform the movement as well as a more dressage-y type, like Deniro Z, but he’ll lose a bit for the paces. But, as she continues, the partnership this pair has will be the most important thing on Saturday.

All that said, we’re seeing some lovely, obedient work (and a nice clean change!) from Nio – he’s come on enormously in this phase.

Next up is Sparrow’s Nio, ridden by Allie Sacksen. Nio is a Connemara/Thoroughbred cross and clocks in at just 15.3hh – and he and Allie so obviously enjoy one another’s company that it’s great fun to watch!

It’s a 30.2 for Liz Halliday-Sharp and Deniro Z – some brilliant work in there, but those changes were very, very expensive. This is still a competitive score, but it really opens the door for someone else to lead this morning.

A bit of trouble in the changes – all four have been a bit hoppy and muddled. These are four scores that will be below five, says Marilyn.

“It all just flows,” says Marilyn Payne, who wrote this test. That’s one of the things that judges are looking for, she says – does it look like the test is one sinuous, flowing movement, or are horses and riders tackling each section as unconnected blocks? 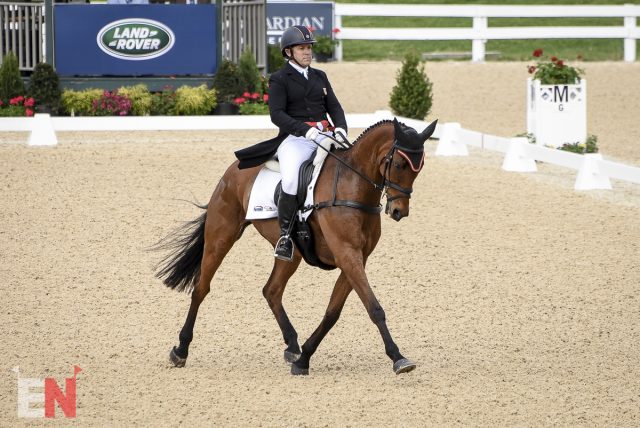 It’s a 32.1 for Buck Davidson and Park Trader! Now we’ve got one of our real heavy-hitters: Liz Halliday-Sharp’s Deniro Z. This is a very, very consistent sub-30s horse, who finished eighth in his debut five-star at Luhmühlen last year. Let’s see what they’ve got for us!

We’ve gone from a young gun in Islandwood Captain Jack (10) to an established campaigner in Park Trader (17) – but who will the judges prefer?

Wow! Buck and Park Trader really go for broke in the extended canter – at this level, you’ve got to have guts and gumption to get all the marks you need. The risk is that it can be hard to come back from a full-tilt extension, and that’s what we see here – Park Trader’s change at the end is clean, but it’s a bit late. That could prove costly.

This test has longer half-passes than we’re used to – so we’ll see this movement become pretty influential. Balanced, focussed horses who continue to listen to their riders throughout will reap the rewards.

Buck Davidson and Park Trader are in the ring now – Park Trader is looking keen and ready for action!

Some really solid, consistent canter work from Caroline Martin and Islandwood Captain Jack – they score a 40.0, which won’t be the best score we see this morning, but will take the pressure off and give Caroline the breathing room to give her horse an educational week at Kentucky.

Caroline might be young, but she’s got ice in her veins – she takes her time and establishes the halt before reining back. Islandwood Captain Jack isn’t always the easiest horse, but he’s strolling through the walk section like he’s out for a walk in the park. Very, very nice work from him.

Our first horse is in the ring! Caroline Martin has just come down the centreline with her first ride of the week, the gorgeous grey Islandwood Captain Jack. A really nice entry from this pair.

Our very own Jenni Autry is holding down the fort ringside on USEF Network – can we take a minute to fan-girl? OF COURSE WE CAN, THERE ARE NO RULES HERE.

We’re starting the day with a very dapper looking defending champion chatting about his prospects this weekend. Oliver Townend is looking pretty confident – “it’s exciting to come here with a top-class horse,” he says, praising Kentucky as one of the very best events in the world. Too right, Townend!

It BEGINS. Are we buzzing? We are buzzing. Just a few minutes now until Caroline Martin becomes the first 5* eventer ever. (Okay, sure, the level has only changed in name – but still, it sounds cool!)