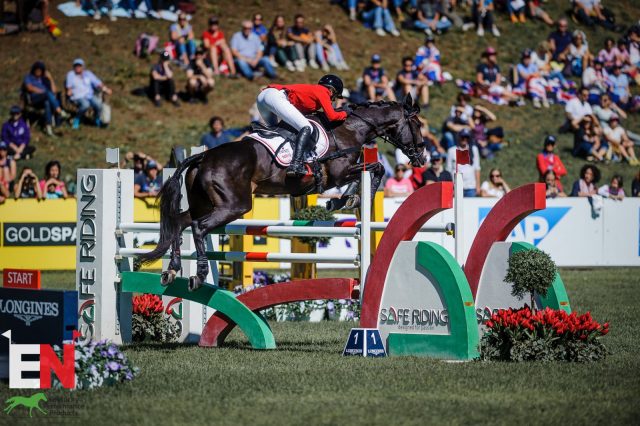 What a morning it’s been here for the first session of showjumping at the 2022 FEI World Championships for Eventing! This is just course designer Uliano Vezzani‘s second eventing showjumping course: previously, the ‘king of the slopes’ has spent decades as one of the most interesting characters in showjumping. He’s designed FEI World Cup courses, Global Champions Tour tracks, and innumerable Grands Prix, and his raison d’etre within the sport has been the reintroduction of grass arenas — and undulating ones, at that — into the top level.

In his first eventing role, which saw him design the showjumping track for the test event here this spring, he gave us a taste of what might be to come — and what we learned there is that he’s a man who isn’t afraid to build dimensionally big jumps and ask for a level of technical skill that’s above and beyond what we often see in our sport. As a result, we knew that today’s finale at the FEI World Championships of Eventing would be seriously influential — but even those of us with an inkling of what was to come were given lots to think about as today’s course was set.

The first session of showjumping, which runs in reverse order of merit, saw the first 43 competitors of the day take to the arena, and ultimately, just five would manage clear rounds — and four of those would do so without time penalties in the tight 90 second optimum time. As the day got underway, the faults were hitting the double-figures with such consistency that a one- or even two-rail round felt like an enormous accomplishment, and our first clear of the day didn’t come until the 28th rider in the ring. That was Italy’s Arianna Schivo and Quefira de l’Ormeau, who gave the enthusiastic home ground plenty to celebrate and move up at least ten places to a minimum of 32nd place as a result.

But what is it that’s making this track so achingly difficult, and what might that mean for this afternoon’s top 25, who take to the ring from 14.30 local time (13.30 BST/8.30 a.m. EST)? We caught up with several riders and trainers to find out — and crunched the numbers on the course’s most influential spots.

There wasn’t a single fence on the course that didn’t come down at some point in the first session, which saw 136 poles fall in total — an average of just over three rails per competitor. But there were several spots that were particularly tough: fence 5, a white oxer with a significant brush underneath it, which turned horses back away from the in-gate on a right-handed turn after the first of the three doubles on course, was the most influential single fence, with 21 riders faulting there.

“He jumped amazing, and that fence that he had down is really hard to read,” says Britain’s Laura Collett, who pulled 5 down with London 52. “I cantered up to it in the beginning and with the bushes in the back it just draws you past where the front rail is, which is clever.”

Unlike many of her competitors, Laura found that the course presented a wide variety of choices to make on the stride patterns.

“I think it’s a very clever track. I think with being in a big arena like that, it’s almost too many options on the distances because they’re big distances so you can almost change your mind a few too many times in there whereas if you’ve got a three stride or four stride that’s what it is. Whereas you know you’re on seven, eight, nine, ten stride… so it gives you more more options but equally sometimes that’s been more confusing for the riders.”

The doubles on the track increased in difficulty as the long, tough course went on: 4AB, which was built on a short two-stride line from an airy red-and-white striped oxer to an upright, claimed four rails at the first element and seven at the second, while 7AB, a slightly more flowing two from an upright to an oxer, saw seven poles fall at the A element and six at the B. But the final double, 11AB, which is made up of a upright to an upright, was by far the most troubling of the three, and 17 rails ultimately fell at the first, with a further eight coming down at the second. The distance from 10 to 11A quickly proved to be crucial: it’s a six-stride related distance, and if that wasn’t right on the money, the cumulative effect would see a snowball effect with poles falling.

There wasn’t any break for a breather after jumping the final double, either. A total of 19 competitors pulled the penultimate fence, an oxer over a water tray, while the final fence, an upright, fell 12 times through the course of the morning session.

“It’s a big arena,” points out Maxime Livio, who’s here in a coaching capacity helping Thailand’s Korntawat Samran, who delivered one of the four double clears. “It’s very long after quite a difficult cross country yesterday, so some horses start very well and jump after jump after jump would start to be a bit difficult for them to stay focused and careful until the end. That’s the first thing — and the second thing is, it’s quite big. I think it’s the highest fences we can have at a championship, but it’s the World Championship, so it’s quite normal to have that level here. And all the oxers are very square and very large, and course designer was clever to play with the colour of the poles, and something like little trees or a liverpool under the fences, and then the horses are more looking at that with a very light pull. That means you see some big scores even when the riders and horses aren’t actually making big mistakes.”

Worth bearing in mind as well, he points out, is that there are more inexperienced horses and riders in this first session, which contributes to the high overall numbers of faulters: “Some top riders are here [in the first group], here because they had a problem yesterday but most of the rider in the first session will be riders who may be a bit just inexperienced for that level. So we will see how the second part of the course goes, but it will be very interesting for the medals.”

One of the first riders in the ring was also one of the few to enjoy a single-rail round for much of the afternoon. He, too, noted the cumulative effect of the course, which is largely set on interlinked related distances, so one error inevitably leads to several more. 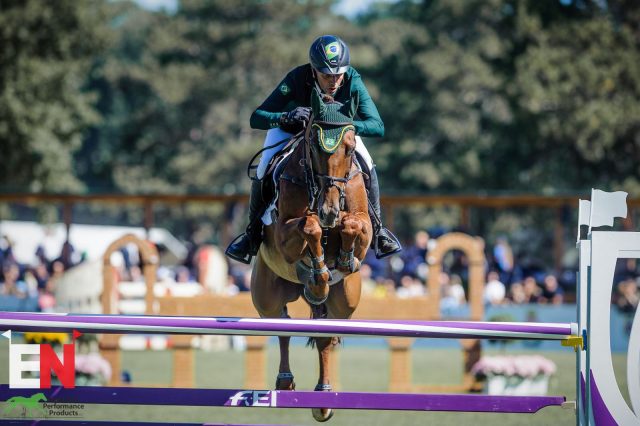 “I think it’s big and square from the beginning, and it was tough yesterday on the horses,” says Brazil’s Carlos Parro, whose impressive four-fault round with Goliath gave competitors much to consider. “I came to the test event and found that he builds quite tough tracks. And it’s things that we’re not quite used to doing in the show jumping — like, you know, big, open distances, and then you come up to a combination and they’ve got a short distance. So this change of things, and the speed, I think that’s what catches you out.”

Germany’s pathfinder Christoph Wahler delivered another of the clears inside the time, which came after a period of intense schooling over technical questions at home — and was aided by the insight of teammates Michael Jung and Sandra Auffarth, both of whom jump at Grand Prix level as well.

“It is a difficult, difficult course,” says Christoph. “Honestly, the horse has had some incredible show jumping rounds in the past and I know he’s a very good jumper. But luck wasn’t on our side this year so far with the showjumping, especially in Badminton and also in Haras du Pin, so we did have a focus on on that clear around today in our preparation, and in the training courses we build at home, and he was fantastic today.”

“Usually at home we have a couple of training lines — you pop over and you pop over and then you go to the show and you ride whatever’s there, but now, you know with this year, not doing so well in show jumping, we tried to make it difficult at home — you know, all these rollback turns, the change of direction all the time, a lot of approaches, you know, a distance into combination, and [that’s] something we have been working on, and I think that paid off today,” he says, continuing: “I think the distances were clear, especially for a big-striding horse like mine, and then you have to turn and if you’re always focusing on only the striding and the distances then you can get caught up quite quickly. So for me, it was very important to use the turns to get him back on the hind legs because once you’re in the distances, as the others [said], one little mistake and it’s all gone. But for me, if you have show jumping riders, especially like Michi and Sandra your team, they jump the 1.60m week in, week out, and it is quite interesting to listen to what they have to say and try to put that to work.” 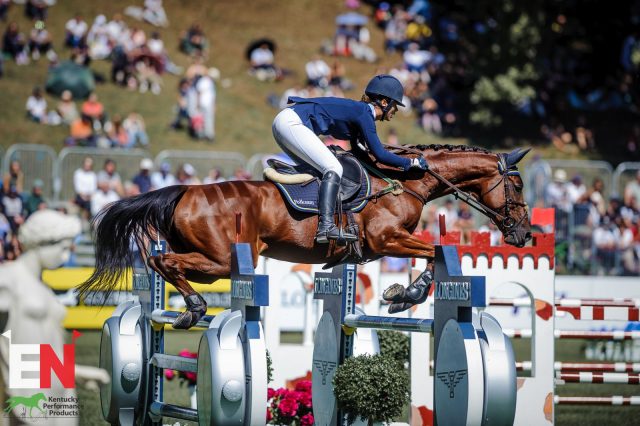 Sweden’s Sofia Sjoborg also delivered a clear, albeit with 1.2 time penalties, with Bryjamolga van het Marienshof Z. Part of the difficulty with time, she explains, is that Uliano lures riders into using more of the available space in the capacious arena than they actually need — or ought — to. He also tempts riders with distances that seem to invite one approach on the first walk, but require further unpacking for success.

“It’s very technical,” she says. “He he likes to do a lot of forward distances into combinations, so he almost invites you to come slightly flying in with the event horses — especially on the last day where they’ve just opened up so much yesterday. I found that it was actually better to almost add one nearly in all the distances just because they need that extra reminder today to sit back and collect. So I think he’s been very clever, actually, because in a classical event horse, that would be a weak part of the jumping.”

We now head into the final session of showjumping, and one thing’s absolutely certain: it’s going to be a nail biter. Stay tuned, and Go Eventing.