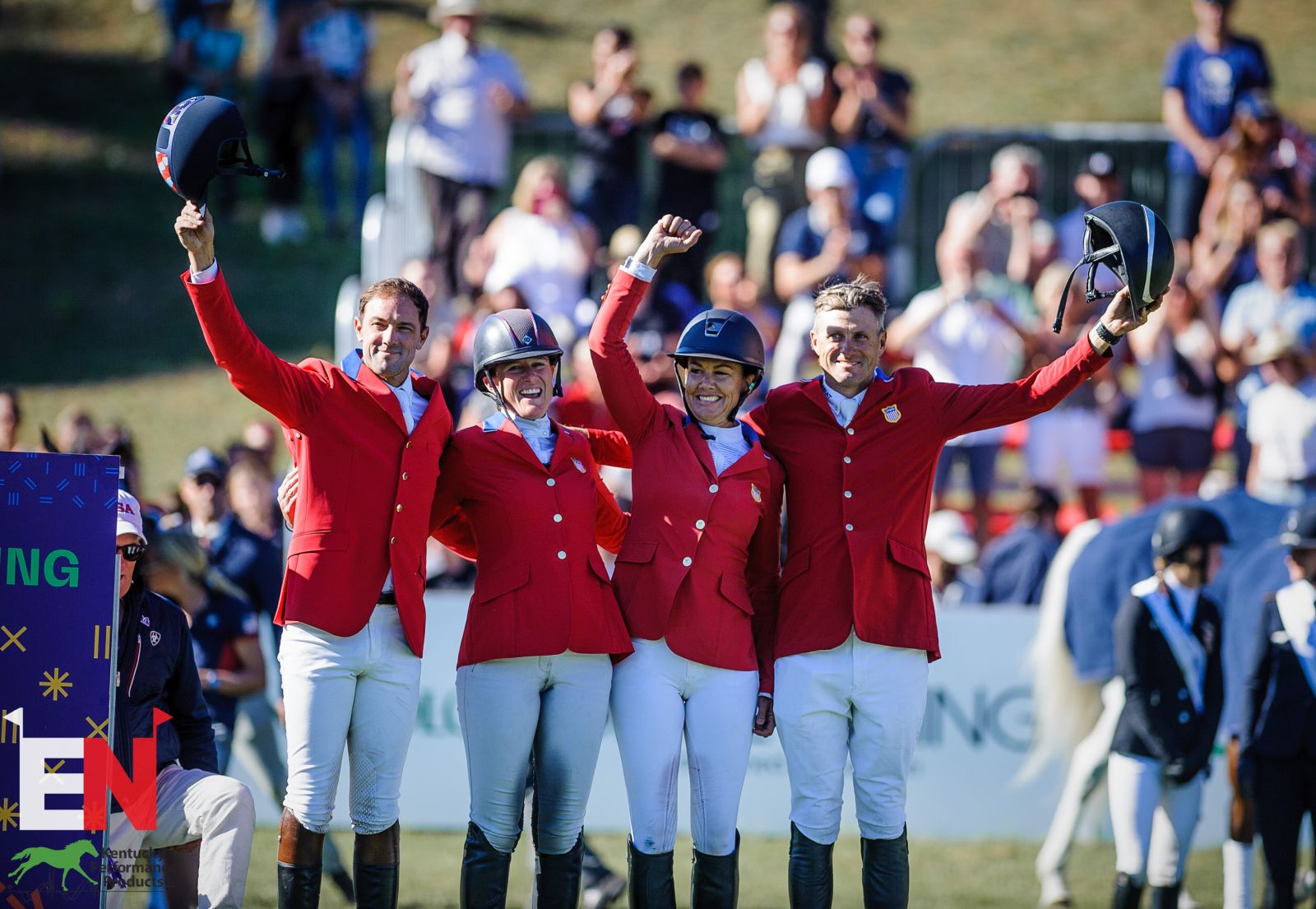 Finally! A twenty year drought ended today for the United States as they won team silver at the FEI World Championships in Pratoni.

The influential show jumping phase decided the final team outcomes, but nothing was settled until the very last horses completed. The running tally was constantly changing — leaving us in the press tent to rely on quick math to figure just which nations would be on the podium.

The final tally of 100.3 gave the Americans that sweet, sweet silver. 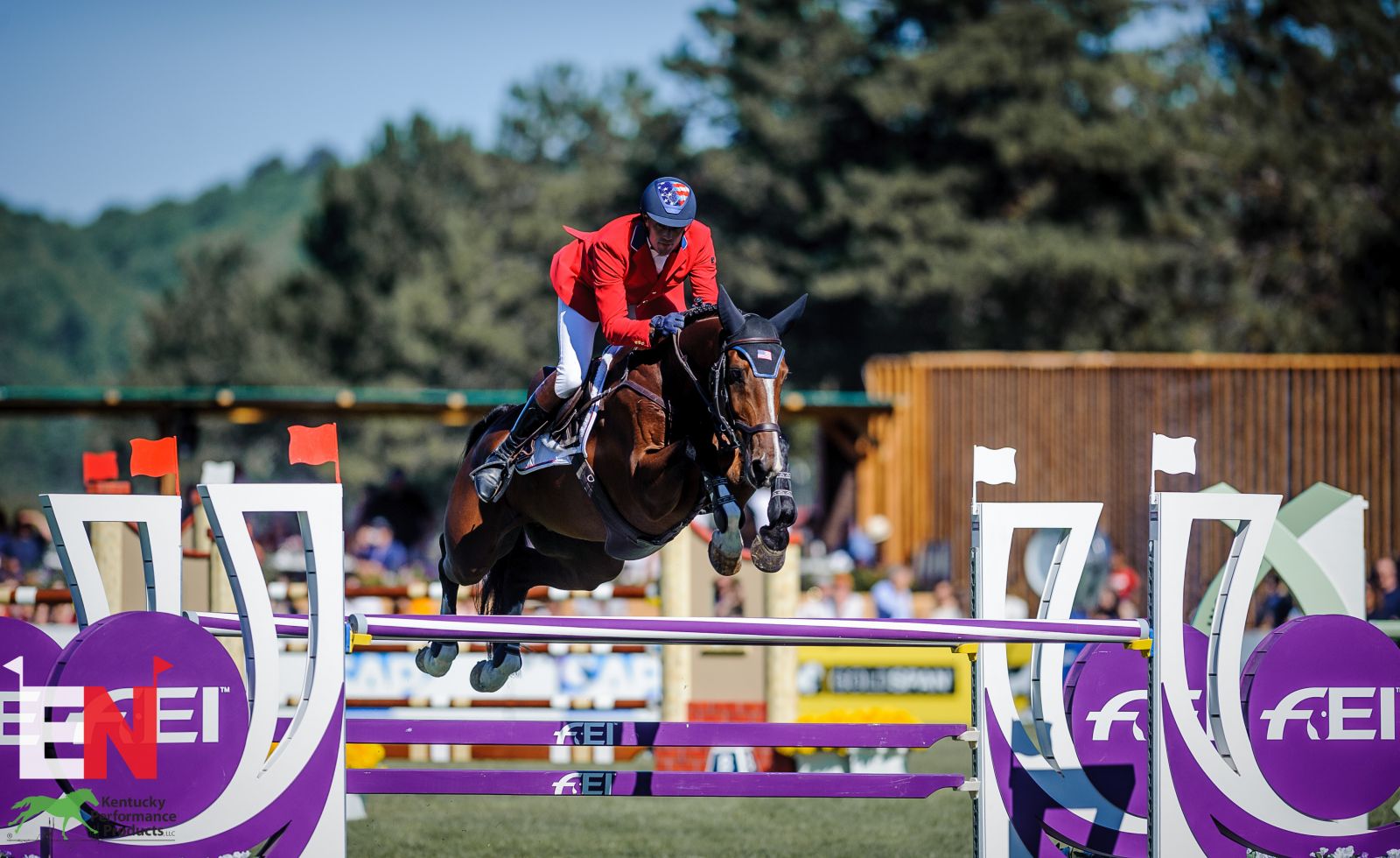 “It was a crazy day of competition. I can’t remember a last day of an event that had this much drama — it’s just wild. But you know, we just kept fighting, kept putting your head down and going in there and trying to keep as many rails up as we could and thank God we were rewarded for it,” said Will Coleman who was the best-placed of the U.S. riders.

He and Off The Record, the thirteen-year-old Irish Sport Horse gelding (Arkansas – Drumagoland Bay, by Ard Ohio), were the only team members to jump clear today and finish seventh individually. “I’ve had him since he was four and it’s just kind of cool to see him go in there and rise to the moment,” he said. 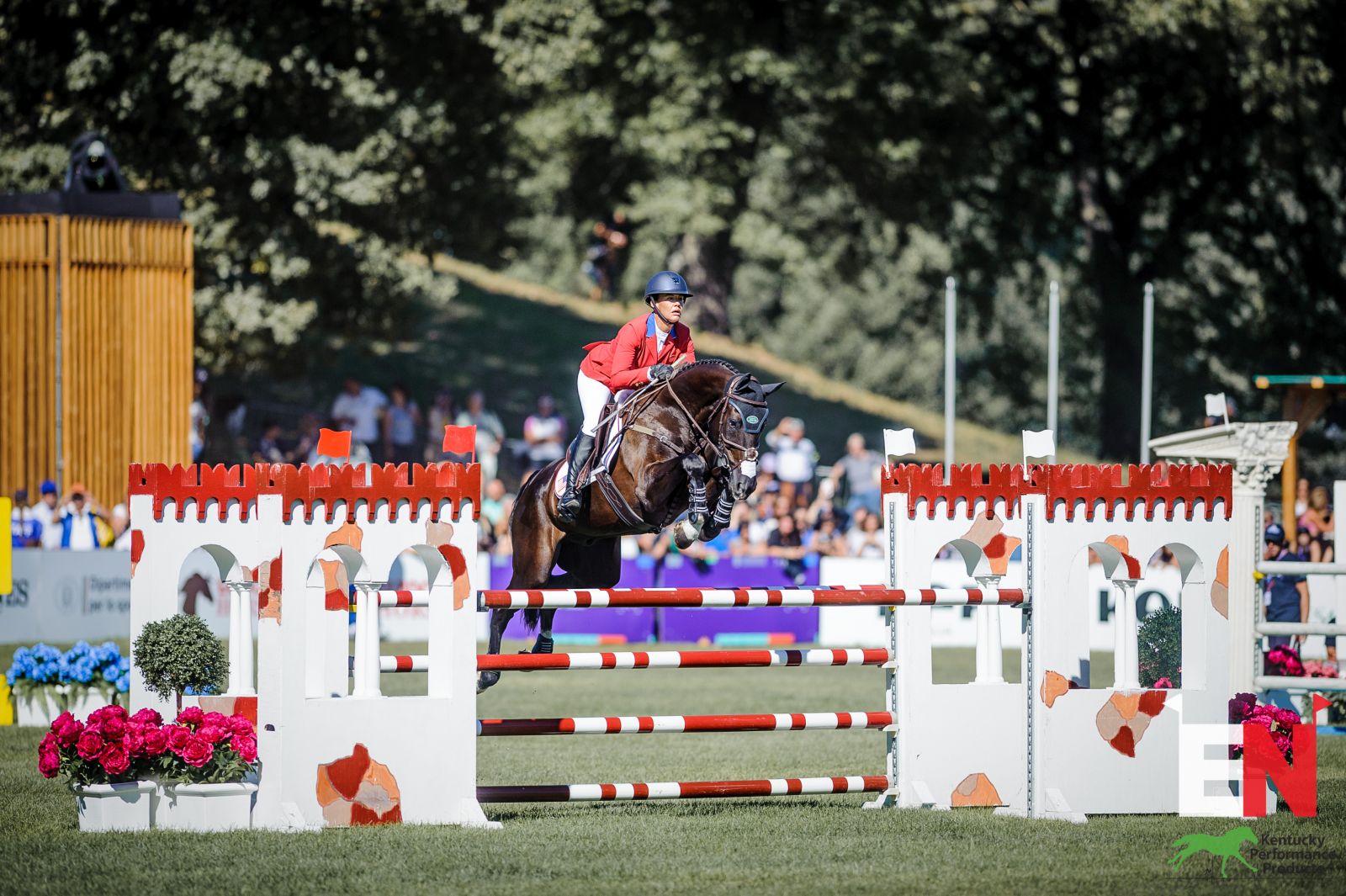 Two rails ended Tamie Smith’s dream of an individual medal today, but as she said — this weekend was team above self, and the classy Mai Baum, who is owned by Alexandra Ahearn, Ellen Ahearn, and Eric Markell  takes home a much deserved team gold.

“Our main goal is to medal for our team and our country and individual would have been icing on the cake, but it wasn’t to be so I’m just proud of my horse and proud of these guys and just super honored to be here,” she said. The Sixteen-year-old German Sport Horse gelding (Loredano 2- Ramira, by Rike) saw the front rail at five (the most influential fence on the course — read more about that here) and the penultimate oxer fall.

“I think that horse is unbelievable but it just is what it is. I’m proud of his fight galloped around with no shoes on half the course yesterday. So, the fact he jumped around like that was really impressive. I’m really proud of him. I obviously was initially disappointed — you know, you’re a competitor, but I came out and they said we got the silver and I was like, ‘Wait, what?’ Because so often you know you do that and you get knocked down. Yesterday was was a real test and you could see it in the jumping today,” she said. 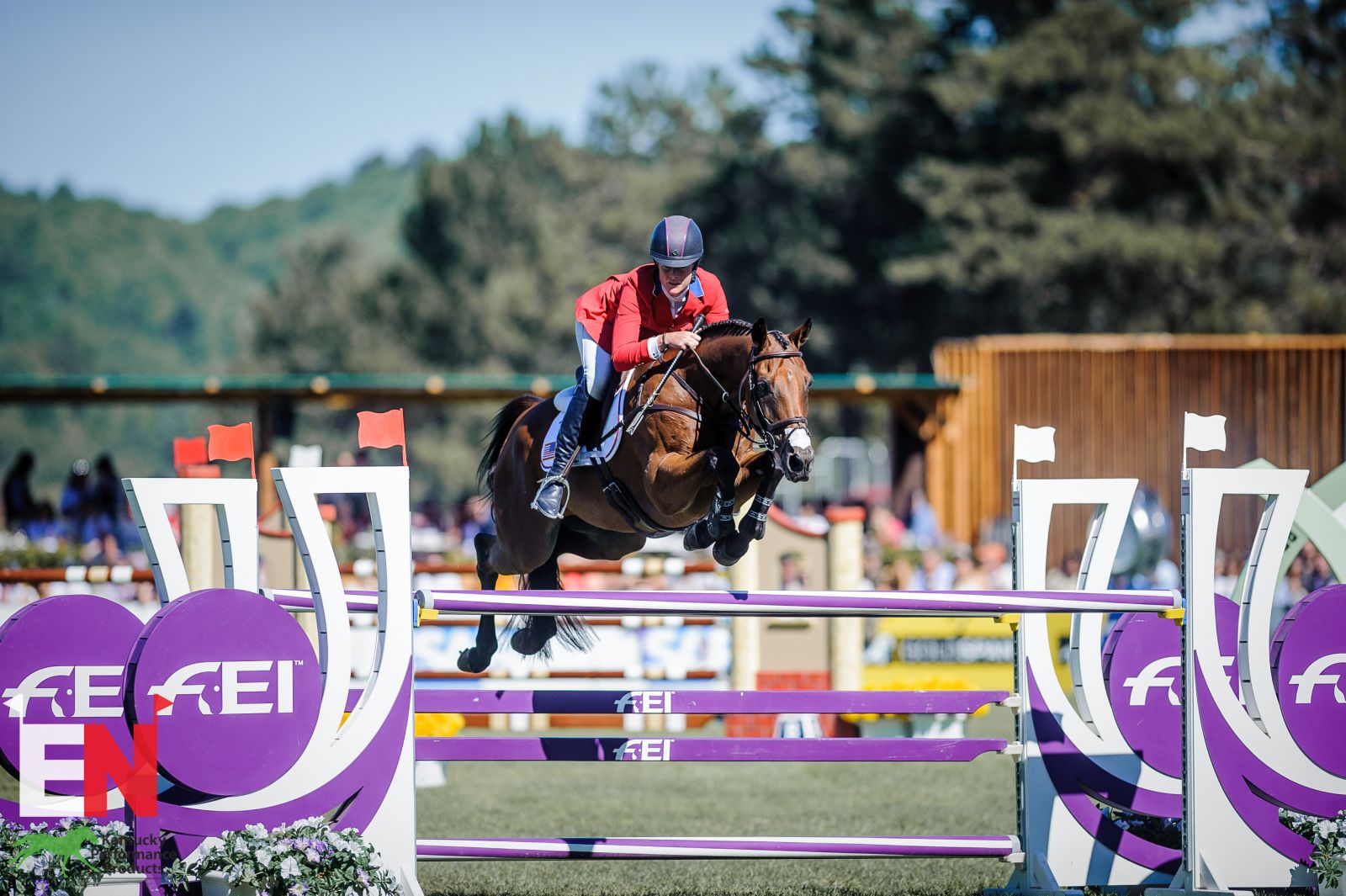 Lauren Nicholson and Vermiculus, a fifteen-year-old Anglo-Arabian gelding (Sazeram – Wake Me Gently), owned by Ms. Jacqueline B. Mars, were initially the drop score for the team after cross country, but only two down late in the course (11a and 12) meant her final result of 90.86 counted toward the team effort.

“I’m not disappointed in him you know you obviously everybody wants a clean round but I think it’s a little bit like grading on a curve today. [Clear rounds] have been few and far between and you know, he really tries gets out in there and you know, he just kind of tipped those two that if caused loads of people problems at the end,” she said.

Still for Lauren this result is a dream realized at a major championship. “We’ve been working on for a very, very long time. And this is an amazing group and we’ve been supporting each other for the last couple of months and it all paid off,” she said. 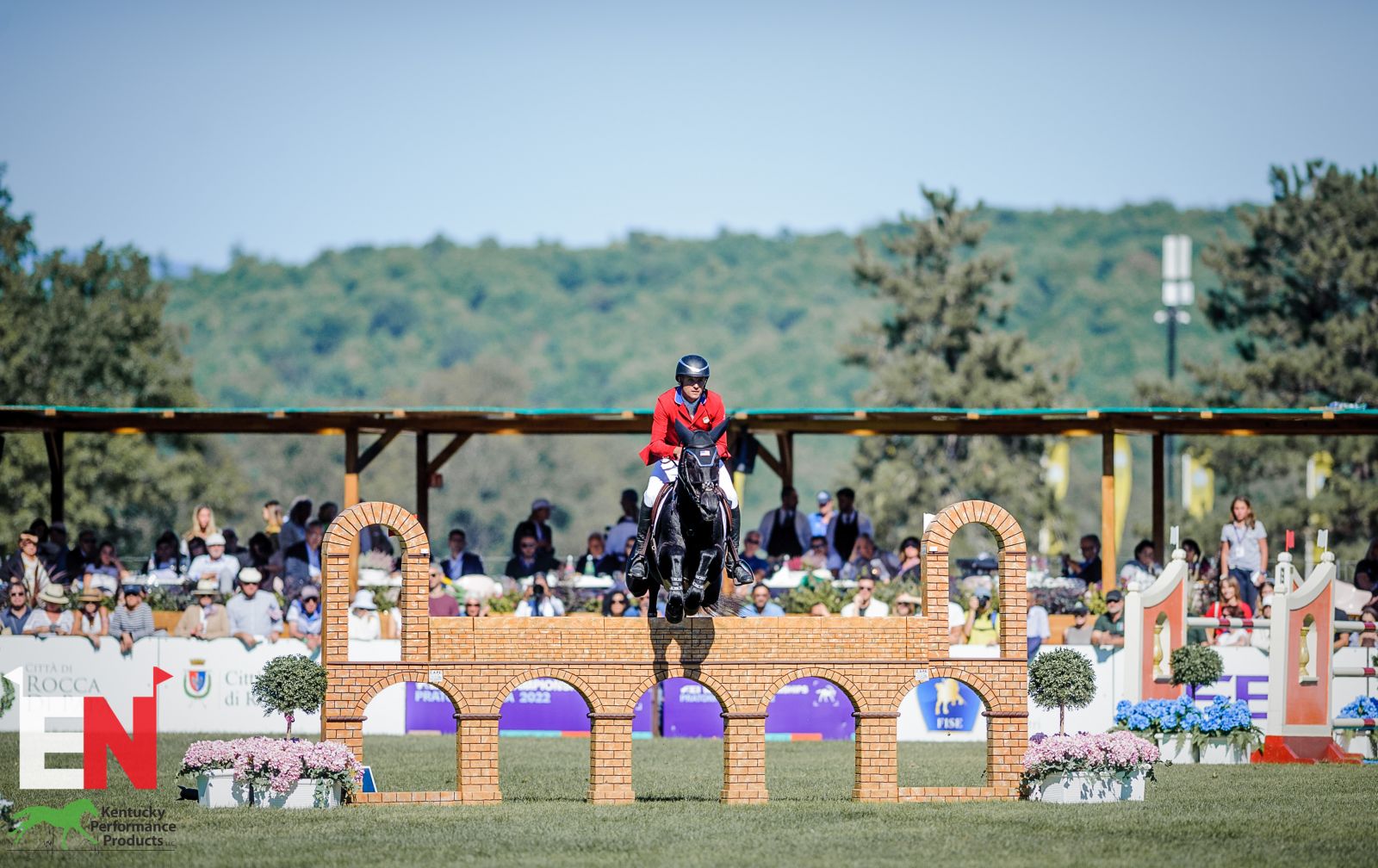 Though Boyd Martin was disappointed with four rails down, he never stopped applauding the efforts of his partner Tsetserleg TSF, the fifteen-year-old Trakehner gelding (Windfall II – Thabana, by Buddenbrock), owned by Christine Turner, Thomas Turner, and Tommie Turner.

“It was the biggest, widest, most technical show jumping course I’ve ever seen it a championship. Poor old Thomas, it’s not his strongest phase. He jumped well and he ticked a couple of rails, but I was just relieved that it didn’t cost the country a medal. So I’m sort of half a bit disappointed with the round but just relieved and just happy and overjoyed that we finally pulled it off,” he said. 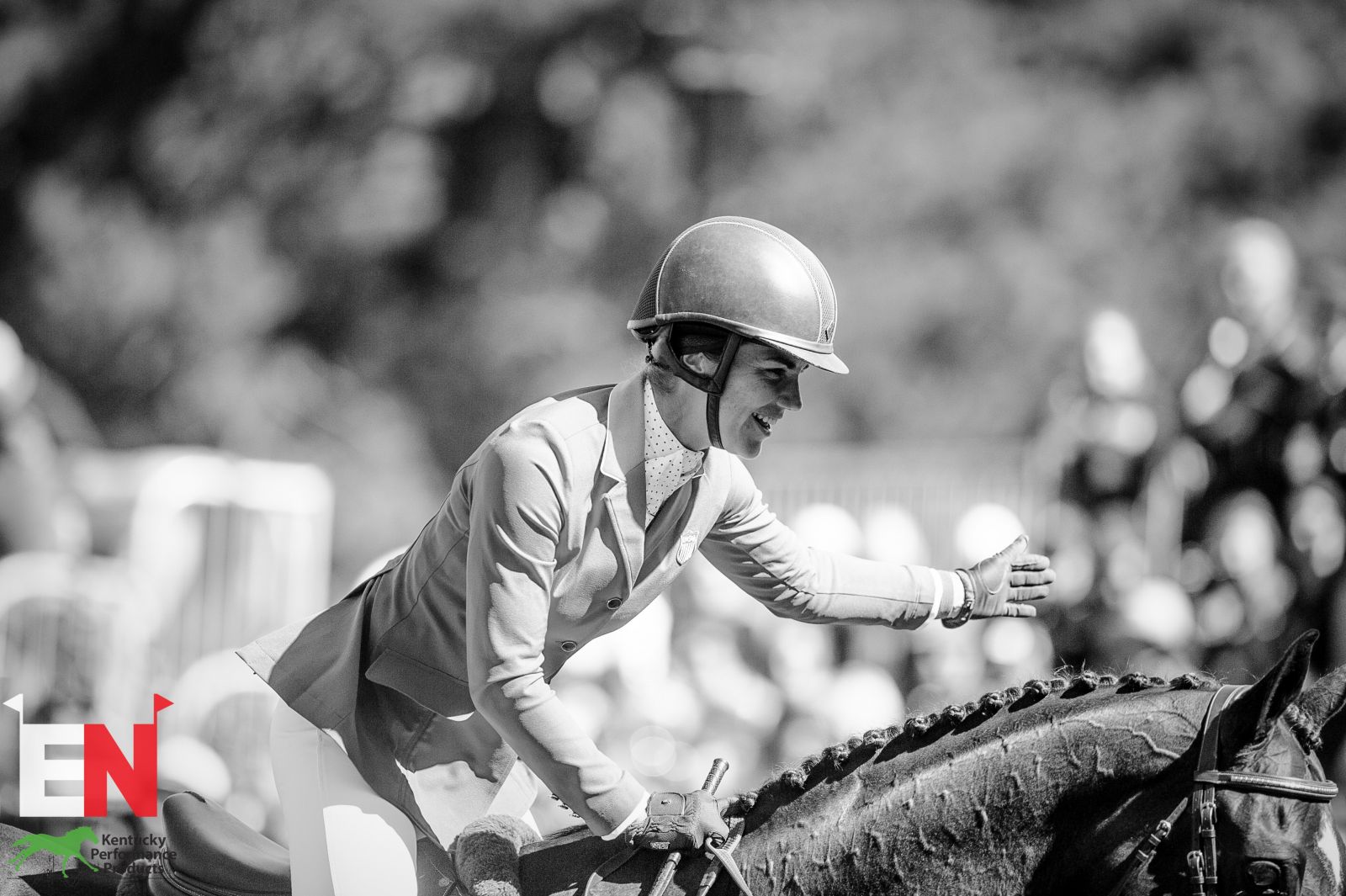 You can hardly say the selectors made a gamble when sending Ariel Grald and Leamore Master Plan to Italy, the pair have four five-star completions at different venues, but hers was a new face on the team announcement, and the rising star certainly proved she was right choice.

Competing as an individual means Ariel sadly misses out on a team medal, but she was impressively the only American rider to finish on her dressage score for 11th individually.

“That was exactly what I wanted to do. He did get a personal best first five-star score. There was a 20 something in there and we’ll get that next year. But I couldn’t be happier with him to have finished on his dressage score. And that’s really all you can ask for, right?” she said.

The Canadian effort didn’t result in a podium finish, but a starting point for the team which is looking at this as a rebuilding phase. They finished in 12th place, which means they’ll have to find another route for Olympic qualification. 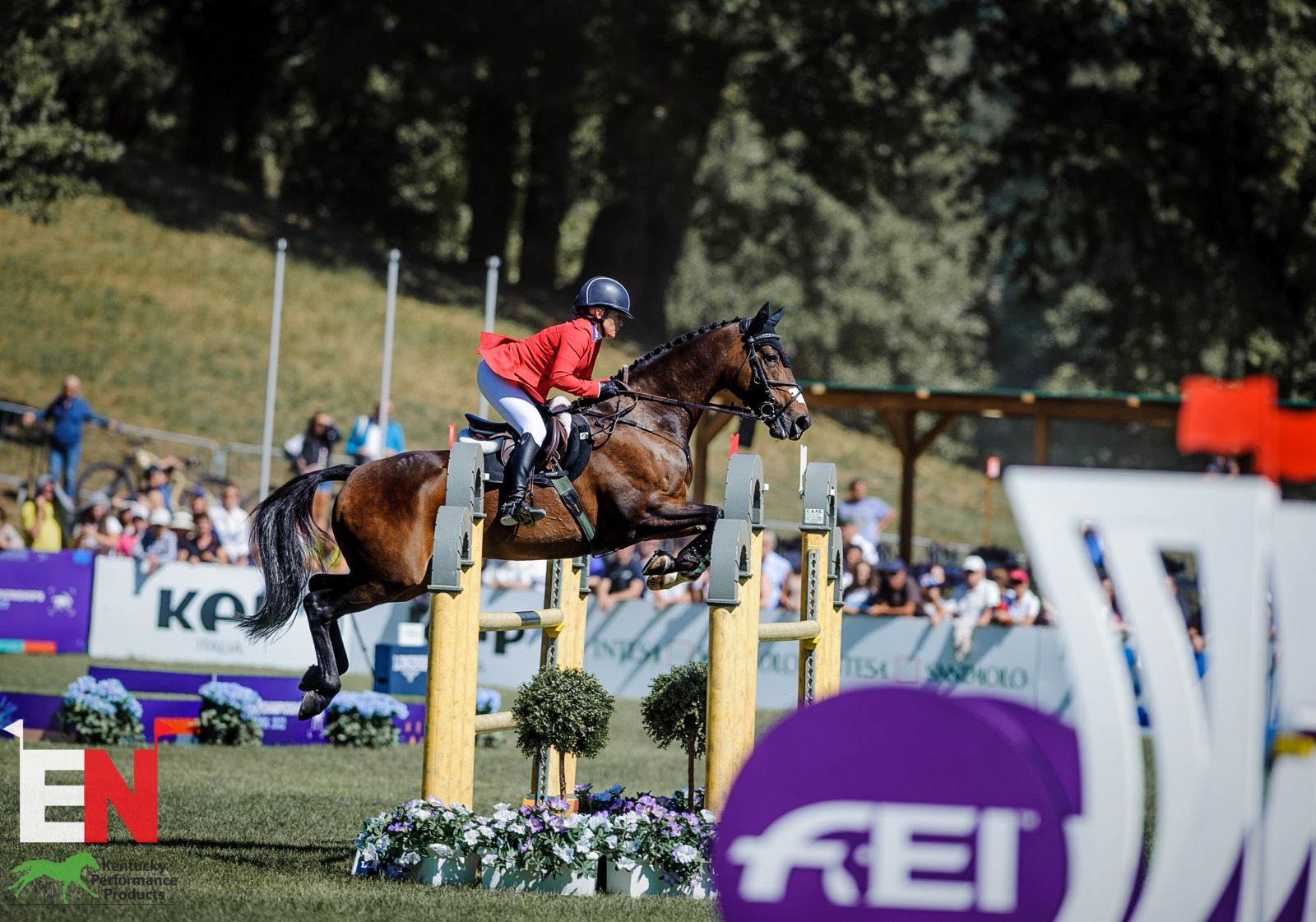 Hawley Bennett-Awad and Jollybo were the top Canadian entry, though the did knock eight rails.

“I’m extremely disappointed — that was not the plan. I’ve been working really hard with Susie Hutchinson and Jolly has been jumping great. We’ve been doing jumper shows and you know, I think that course took a little bit of a toll on her yesterday with the terrain and hills. It has nothing to do with soundness or her age or any of that, you know, it’s a big track and I need to practice and get better. She didn’t feel tired, she just wasn’t as sharp as she normally is. She tries her heart out and I’ll give her a 10 for that,” she said. They end in 56th. 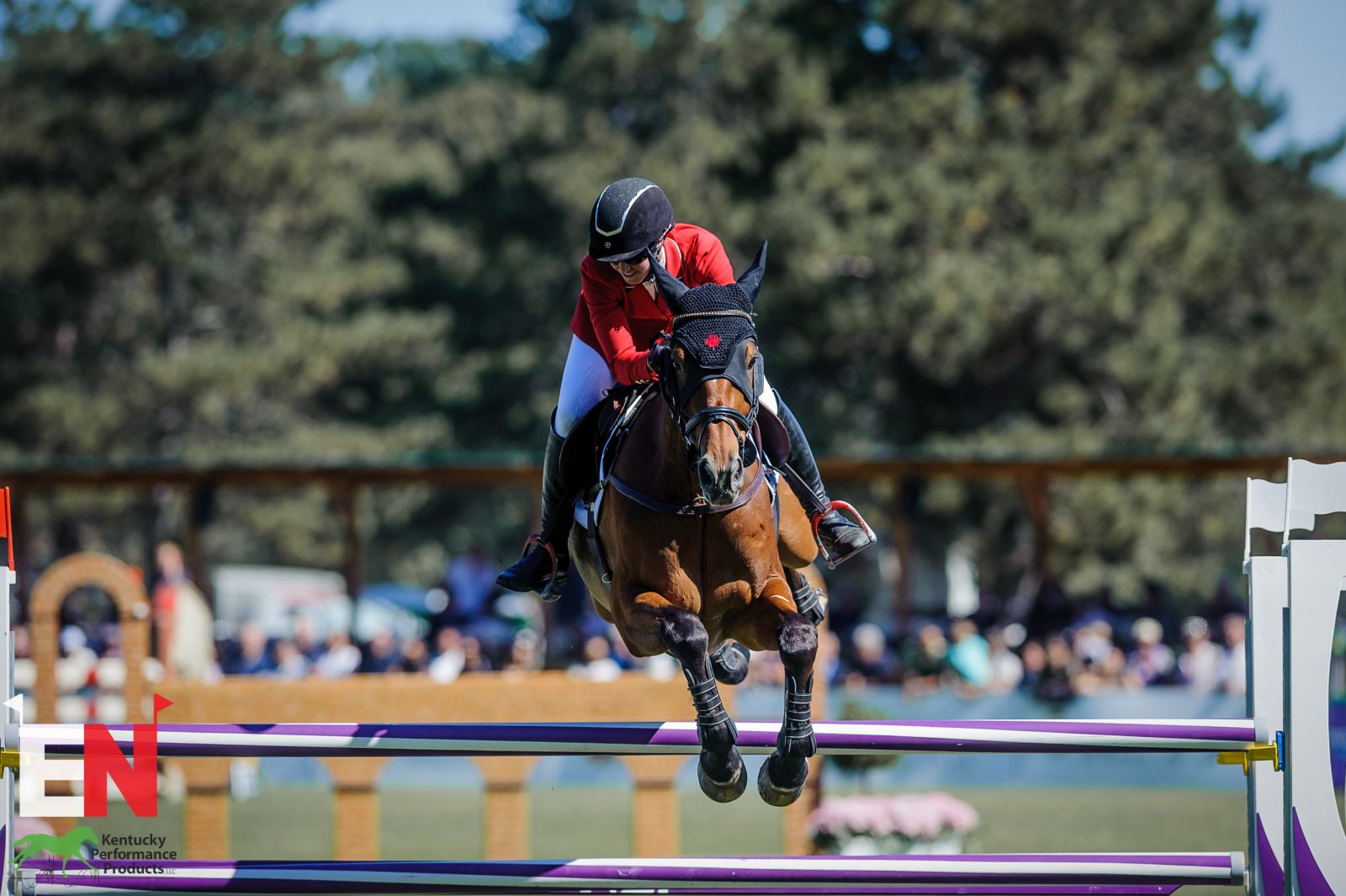 Four came down for Holly Jacks and the syndicate owned Candy King to finish 59th.

“I mean, always want to be better. But I think that as my first team experience, it was my young horse’s first team experience and I think that we’re coming out of it with the completed score that I want to improve for next time. I think he came out a more confident horse, and I’m definitely more confident rider and I’m proud of finishing,” Holly said.

As a first-timer at a major championship, this week stands as a jumping off point for her career and the Canadian High Performance program. “The group of people we have is amazing. And the team dynamics has been phenomenal. I think like five months ago, I couldn’t say a nice thing about where our sport was heading and I think these people come together and it’s been brilliant. I think we have the best group of people working for us and volunteering their time and having James at the EC office and it’s been a big, great thing for our sport,” she said. 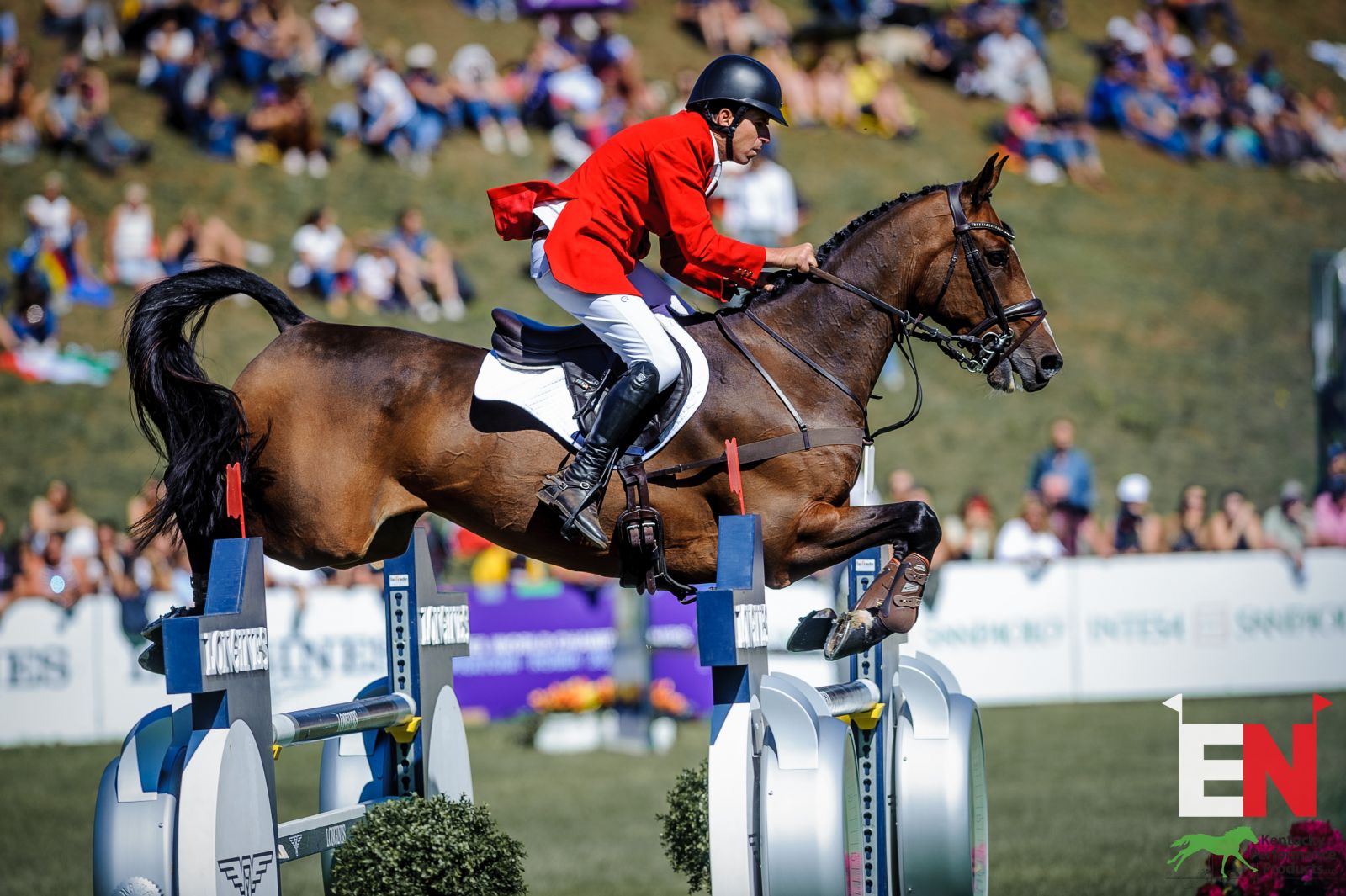 Mike Winter saw only one pole come down plus a second on the clock to finish 60th with El Mundo, the 13-year-old KWPN gelding (Numero Uno x Calvaro’s Bria Z, by Calvaro F.C.), owned by Jonathan Nelson, Emma Winter and the rider.

“He felt amazing, but it’s a horse that loves — well, he loves all three phases — so it’s me just making sure I make good pilot decisions and help him be as good as he can be. And stay out of his way when he needs to be brilliant for me, like today he was very, very good. I made a tiny mistake. I wanted a big jump into that long six stride so I could arrive at the double verticals shortening, but I maybe did that a little too much and had a very big jump in and then when I went to put the canter together, he arrived at the first vertical a bit hollow and maybe could have moved a bit of it to soften him down to that instead of taking both reins but you know, I have that problem of only seeing the negative in my riding but I enjoyed it a lot,” he said. 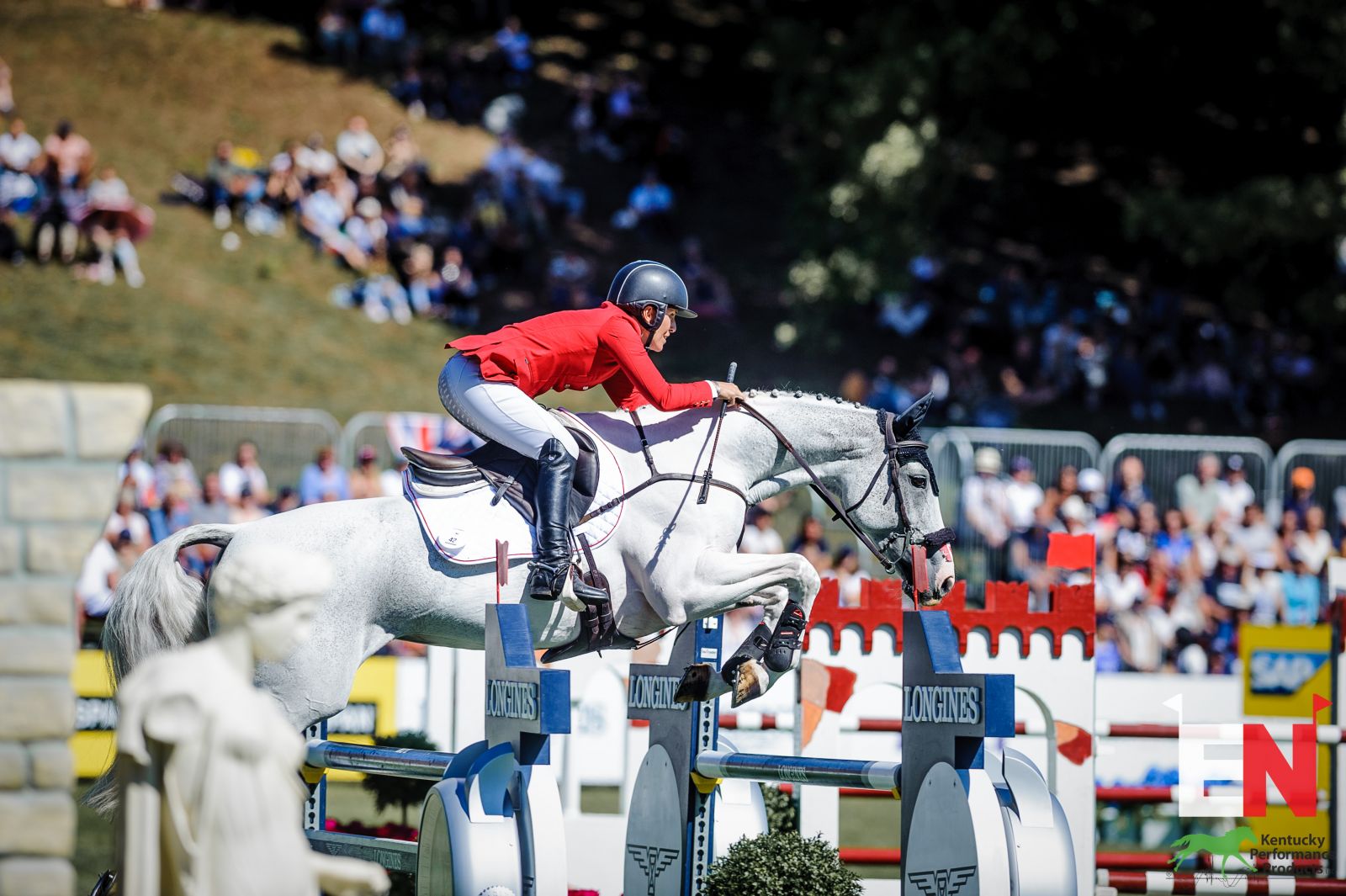 Dana Cooke had to dig deep after a stop in the final combination, but she and FE Mississippi, a 12-year-old Württemburg mare (Cassini II x Liastra, by Legaat) completed for 67th place.

“That’s the most tired I’ve ever felt her show jumping. I think the track yesterday was tough. They were all tired and she definitely felt a little more tired than  I have ever felt before on her. And some of the strides I was seeing and the strides I was getting were not the same. But we got through it, we finished,” Dana said. “Honestly, it’s amazing because when I went to the Pan Ams, it didn’t happen  — I didn’t get to show jump, so it’s nice to finish a championship. It’s probably at the top of her game. For sure. So she did try our guts out, she was just a little bit tired.”