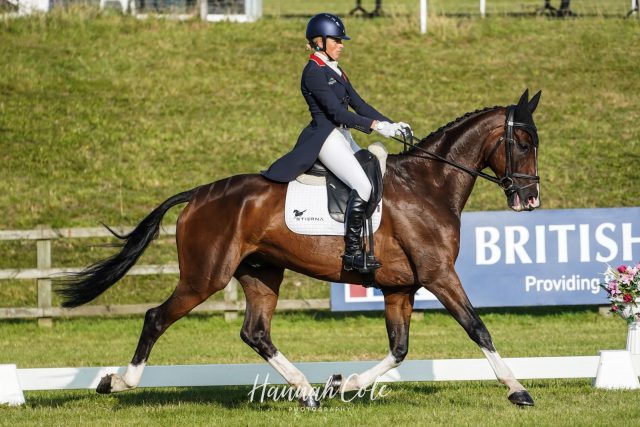 Izzy Taylor and Monkeying Around continue their long string of impressive dressage performances, taking the lead in the CCI4*-L as we head into cross-country. Photo by Hannah Cole Photography.

Sometimes, a rider will turn up at an event and the competition will immediately curl into their lap, purring like a happy kitten. That’s certainly been the case for Izzy Taylor at Burnham Market over the past few days; if there’s a bowl of cream anywhere on site, it’ll certainly be found in her lorry. Yesterday, we saw her take an enormous lead in the CCI4*-S class aboard eight-year-old Hartacker, a horse who had previously sat quite comfortably on scores in the upper-20s. The 20.3 they’d end up posting turned out to be a career best for the horse, the rider, and the venue. That, we believe, is what they call ‘a good day at the office.’

But if Izzy’s known for anything, it’s the fact that she doesn’t stop working until all the work’s run out. Rather than getting complacent after her great performances yesterday, and rather than coasting along on the fact that her CCI4*-L mount Monkeying Around is dressage-bred — with performances to back it up — she came out riding to win. Her laser-sharp focus and immaculate production of the horse throughout the test earned them a 23.2 and the dressage lead.

“There’s always more to come; it’s easy to forget that he’s only nine, but I was really pleased with him,” says Izzy.

We last saw Monkeying Around just last month in the CCI4*-S at Burgham, where he finished third after adding a cumulative total of two time penalties to his 21.2 dressage — though the former Six-Year-Old World Champion’s performance at the four-star level has been somewhat varied, with two cross-country clears out of six runs at the level so far. But while Burgham suits the horse — both those clears happened there — it was easy to see how the gelding had matured through this year. If that straightness and conviction continues over tomorrow’s cross-country course, the nine-year-old will be formidable. 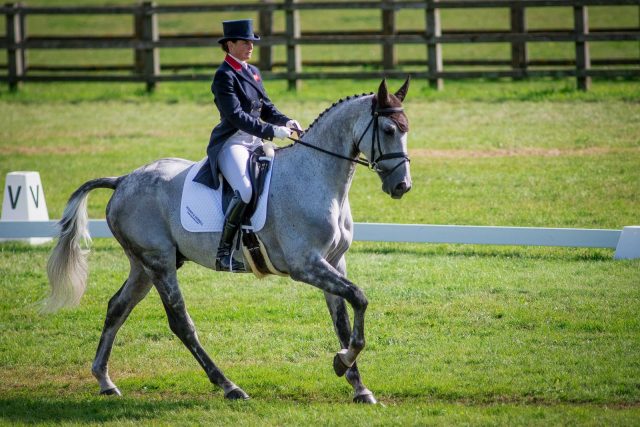 Piggy March sits in equal second place overnight on a score of 26.2, earned by two of her rides: the former Emily King ride Dargun, who performed his test yesterday, and the former Izzy Taylor ride Fonbherna Lancer, whose turn between the boards came today.

“He’s beautiful — very eye-catching,” says Piggy. “I can probably get certain areas a bit quicker, though — he’s a big mover, and it can sometimes get a bit slow. But his brain was really with me, and I felt he really tried and didn’t feel his attention went elsewhere or missed any signals.”

This is a second international for the pair, who came together at the start of 2020 and finished second in the CCI3*-S at Burgham. Though his early international efforts show a couple of blips, it all began to come together in 2019 for Fonbherna Lancer, and he added a second place finish at Ballindenisk CCI4*-S and a top twenty at Boekelo to the crown jewel of his record — a win at Millstreet CCI4*-S. Now, Piggy’s been working to get to know the horse — a proposition that, in opposition to her familiarisation process with yesterday’s ride Dargun, has been made somewhat trickier by lockdown.

“He’s a really easy horse in lots of ways, but is inwardly a little bit more of a thinker than he would let on,” she says. “He has a little bit of history; I don’t think he was the easiest young horse, but I find him a fun horse — he’s a good mover and a good jumper, and he likes to run. He’s definitely quite a foreign horse, but with enough quality. We’re still learning so much — every run I do, I’d have changed the bit, or the saddle, or the feed… I’ve had him since the beginning of the year, but with only two runs. At home he’s so easy, and it’s only when I’ve got to the competition environment that I’ve figured out things I can do to improve.” 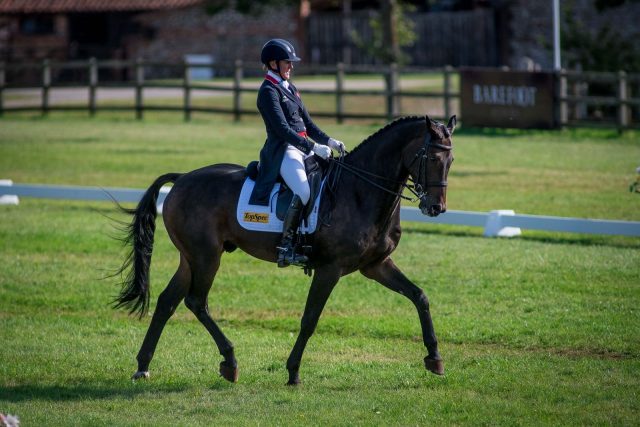 Nicola Wilson found herself in the top ten yesterday aboard the experienced Bulana, who heads into cross-country in seventh place on 27.6. Today, she added another ride to the leaderboard in JL Dublin, a nine-year-old Holsteiner gelding in his first long-format four-star. The performance puts her ahead of Italy’s Vittoria Panizzon and Chequers Play the Game and Sarah Bullimore and Corouet, fifth and sixth overnight respectively. 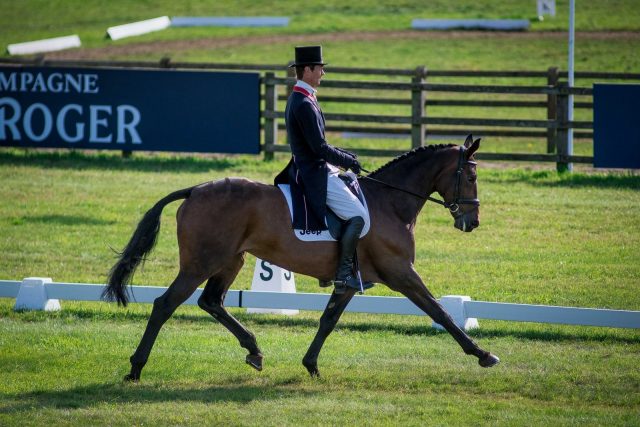 William Fox-Pitt and Grafennacht, an eight-year-old mare making her CCI4*-L debut, scored 27.9 for overnight eighth place, belying the relative inexperience of the horse, who finished fourth in the Seven-Year-Old World Championship last year. They slot in just ahead of Alex Hua Tian and new ride Ballbreaker SD, in equal ninth after their 28.3 test of yesterday. 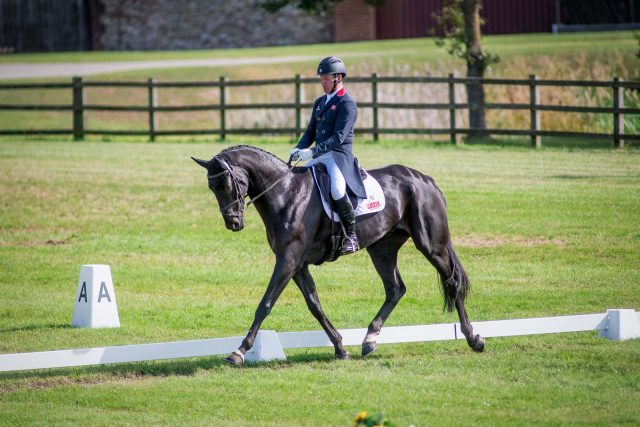 The undisputed king of Burnham Market Oliver Townend closes out the top ten at the culmination of the dressage phase aboard Tregilder, who comes into his second CCI4*-L off the back of four consecutive top-ten finishes at four-star level. They posted a 28.3, proving that their 22.9 at Burgham last month, while considerably lower than their usual low-30s marks, wasn’t a fluke but rather a result of considerable progression through the year. 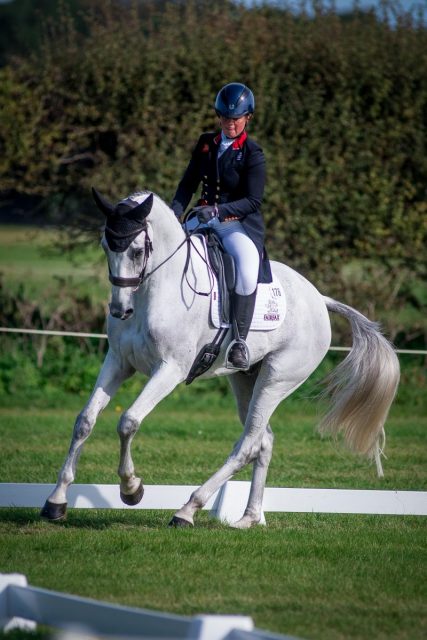 Izzy and Hartacker remained unbeatable in the CCI4*-S class, which incorporates an ‘open’ section with the prestigious eight- and nine-year-old class ordinarily held at Blenheim.

“He was beautiful,” says Izzy. “He’s only eight, and he’s never done a four-star before. He has a beautiful brain and is very trainable — he just really wants to do it right. That’s his biggest downfall in some ways, because he can try too hard, but he was really relaxed in his test and trying. He was 100% with me every stride of the way — it’s so exciting.”

But their three-point lead was narrowed slightly by the efforts of Yasmin Ingham and Banzai du Loir, who sit in provisional second on 22.3 — the 23-year-old professional’s best-ever international score. They’re tied overnight with Sweden’s Therese Viklund and Diabolique. This, too, represents a best-ever international score for Therese, further proving our suspicions that everyone has been drinking a Charlotte Dujardin polyjuice potion over lockdown.

Much of yesterday’s CCI4*-S leaderboard remains full of yesterday’s faces — Oliver Townend and Cillnabradden Evo sit in fourth place, followed by China’s Alex Hua Tian and Don Geniro in fifth and Ros Canter and Lordships Graffalo in sixth. The 2018 Six-Year-Old World Champion Cristal Fontaine sits in provisional seventh on 25.7 with Kitty King, despite a minor wobble in which he misread a trot-walk transition as a halt. But Kitty, who is both detail-orientated and quite unflappable in this phase, rode through the blip seamlessly to continue on with the prescribed movement.

The CCI4*-S began its showjumping phase this afternoon, and will continue through the rest of the combinations tomorrow morning — stay tuned for a full report at the culmination of the action, as well as an in-depth look at the CCI4*-L cross-country phase, which begins at 11.45 local time.

You can follow along with all the action tomorrow and Sunday on Horse&CountryTV, and enjoy a virtual ‘walk’ of the courses — both CCI4*-S and CCI4*-L — via the CrossCountryApp.

The top ten in Burnham’s CCI4*-L at the culmination of dressage.

The top ten after dressage in the combined CCI4*-S section.