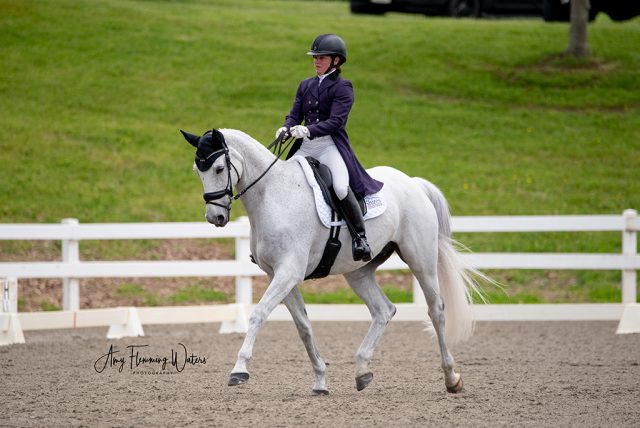 Emily Beshear piloted Jennifer Ward’s Olney Uncle Sam to the lead today in the CCI4*-L at the Jersey Fresh International Three-Day Event. While many riders struggled with exuberant, tense horses in dressage, “Sam,”an 11-year-old Trakehner (Sonset Seiger X Aerial, by Starman) bred in Maryland by Ami Howard of Olney Farm, looked right at home to score 32.9 in his debut at the level.

“He tends to be a bit of a lazy horse, so I’ve been working on some different routines for warm-up on dressage day to get him tuned up enough but for him to not decide it’s too much effort,” Emily said. “I think I’m close to getting the balance right. He went out for a lot of hand-grazing this morning and then he went out for a little lunge just to stretch out, and then he went in the ring and felt like he could show off some of the movements.”

Sam won the Advanced at Millbrook Horse Trials last year and finished the 2018 season as the Dutta Corp/USEF CCI3*-L Reserve Champion, but he has struggled with consistent cross country performances at the four-star level.

“With the length of the course, I think here it’s hard to know how the horses will handle all the twists and turns and ups and downs for that length of a duration. All the questions are very fair, but there are a lot of questions out there,” Emily said.

“Sam is a very honest horse on cross country, but he’s a bit of an overachiever in that sometimes he tries to guess what I want, as opposed to hear what I want, so sometimes I can have a runout when we’re not on the same page. When he’s on, he’s superb, so hopefully that will be tomorrow.” 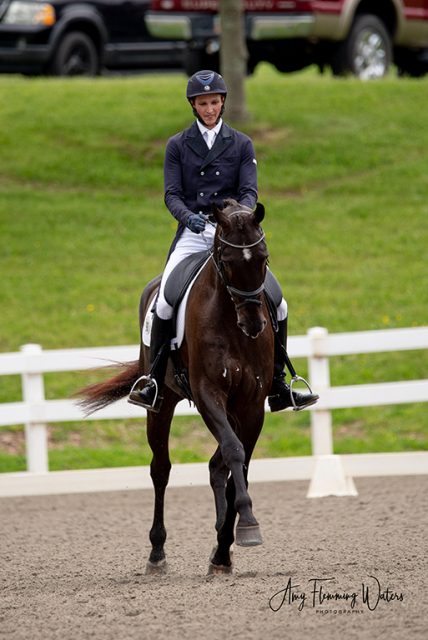 Emily doesn’t have a single second in hand on cross country, as Jacob Fletcher sits just 0.1 penalties behind her on 33.0 with Van Gough, another horse making his CCI4*-L debut at Jersey Fresh.

“It’s definitely the best test he’s done,” Jacob said. He’s getting dangerously close to doing a good test. He got a bit uppity as he was going around the ring. I think the horses can see a lot above them when they get in the ring, and they can get a bit looky.”

“Van,” an 11-year-old Irish Sport Horse gelding (Wivollet Vanbeek x Woodland’s Flight, by Laughton’s Flight) owned by Fletcher Farms, is coming off a big win in the CCI4*-S at Chattahoochee Hills last month, but this will be the first time he’s tested over a 10-minute track.

“He hasn’t done a long (format four-star) before, so I’m just a little nervous as to when the tank will start running out. I don’t know when that might be,” Jacob said. “There are a few tough questions, so it’s just wait and see.” 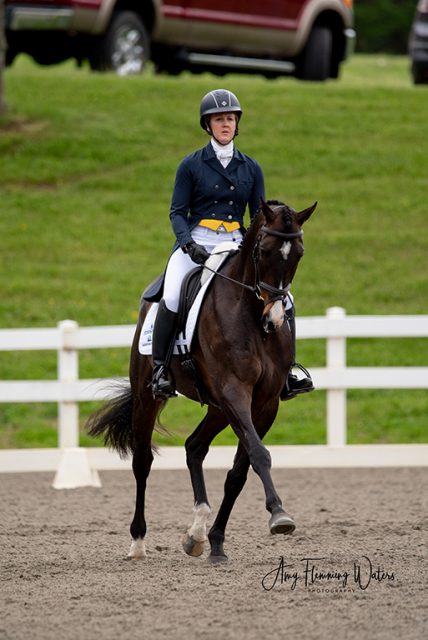 Allison Springer sits third on 33.7 with Business Ben, another horse tackling a CCI4*-L cross country course for the first time tomorrow. If his sassy dressage test can serve as any indicator, “Ben,” a 9-year-old unraced Thoroughbred (Artie Schiller X Min Elreeh, by Danzig) owned by The Business Ben Partnership, is feeling up to the challenge.

“He felt kind of full of it,” Allison said. “At the end of the trot work, he wasn’t as fluid and nice as usual. … He actually bucked in the last canter. I just laughed! He wasn’t trying to be naughty or resistant; he’s just exuberant.”

As for Allison’s thoughts on Capt. Mark Phillips’ course: “I think Mark has done a tremendous job trying to re-route the track here, but it is still windy … and the waters are really tough.” 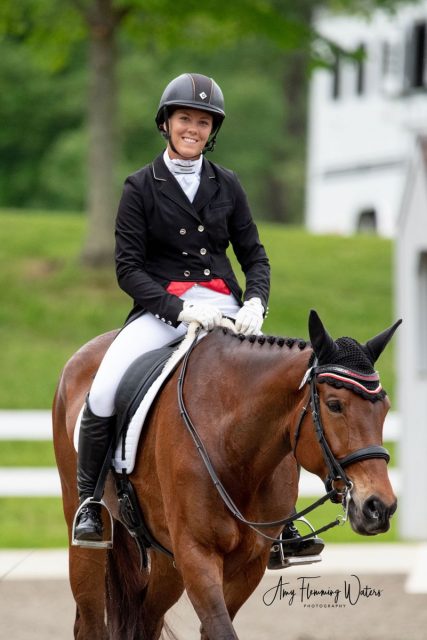 Looking to the rest of the CCI4*-L leaderboard, Fylicia Barr and her mother Shannon Barr’s Galloway Sunrise, a 10-year-old American Warmblood mare they bought off Craigslist for $500 as a yearling, scored 34.4 for fourth place. These two are looking to complete their second CCI4*-L, having ticked the box at the Dutta Corp Fair Hill International last fall.

Phillip Dutton and Fernhill Singapore round out the top five on 35.3. The 10-year-old KWPN (Singapore x Reidellia, by Animo) owed by Annie Jones, Tom Tierney, and Dave and Patricia Vos, is also making his CCI4*-L debut at Jersey Fresh.

Click here to view full scores in the CCI4*-L after dressage. You can view videos from today’s dressage action on The Horsepesterer’s YouTube Channel. Many thanks to Amy Flemming-Waters for providing beautiful photos from dressage today.

Just 8 seconds separate the entire top 10 in the CCI4*-L, so going as close to the optimum time of 10 minutes, 17 seconds as possible tomorrow will prove paramount. Cross country starts at 8:30 a.m. with the CCI3*-L, followed by the CCI4*-L at 9:50 a.m. There is no live stream, but EN will be running live updates. Click here for cross country start times. 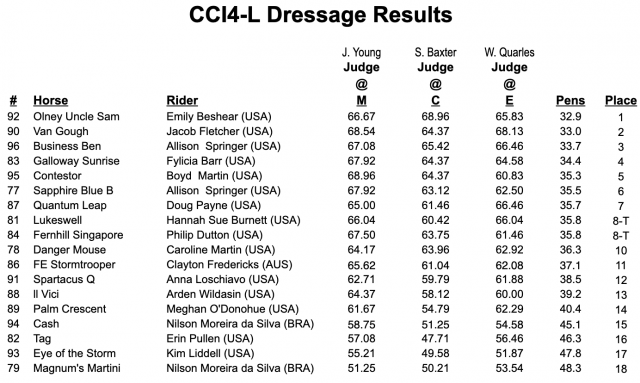