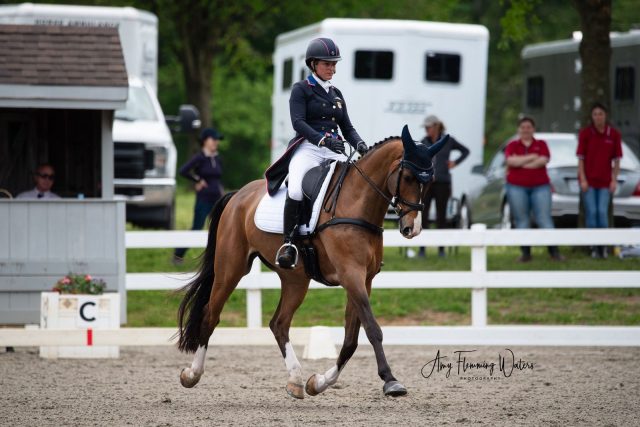 Lynn Symansky sailed to the top of the Jersey Fresh CCI3*-L leaderboard today on a score of 27.3 aboard RF Cool Play, a 10-year-old German Sport Horse (Condors Champion x Roxana, by Radscha) owned by The Donner Syndicate.

“He’s a very fancy horse — almost to an extreme sometimes — so I’ve been trying to get him taking me a bit more in the ring. He struggles with the tension in that it makes him move a little too much,” Lynn said. “He’s a very sensitive horse and sometimes holds his breath. The last year we’ve been working on getting him to breathe and relax and show off his fancy movement.”

While “Coolio” has been successfully campaigning at the Advanced level and finished third in the CCI4*-L here at Jersey Fresh last year, he missed completing a long format last fall to secure his qualifier for the Pan American Games, which run at a the CCI3*-L level.

“He’s a horse I like to have a lot of base fitness, and I didn’t think there was that much to be gained from running the same thing as last year,” Lynn said. “Some people get caught up in goals and having to prove everything in a selection year, and I’m going with my gut and thinking about the long run and the future with him, but also ticking the boxes of getting his qualifier.”

As for Lynn’s thoughts on Capt. Mark Phillips’ cross country course: “I thought the three-star was soft last year, and Mark has definitely asked more questions. The beginning is a little small to get them coming out, and then it gets bigger and bigger, but I think that’s good to build the horse’s confidence at the level. I think he’s done a good job to make the course more flowing on this piece of property.”

While it didn’t quite catch their personal best of 25.5 from Fair Hill last month, Robin said it was one of the horse’s best performances to date in a phase that has “been quietly uphill. … He’s got quite an opinion, and he doesn’t mind telling you when he doesn’t like things, and you can’t really tell him either.”

Robin has patiently built a partnership with the quirky gelding, whom he purchased as a 3-year-old at the Goresbridge Go For Gold Sale in Ireland and has produced through the levels. Tomorrow will be their biggest test to date as “Barry” takes on the longest course of his career.

“At this level you usually find you can answer the question or you can’t,” Robin said. “You’ve either done enough homework or you haven’t. He’s had enough preparation. I’m going to go out quicker than I would normally go. He’ll tell me if he’s enjoying it or not.”

Doug Payne and Starr Witness round out the top three in the CCI3*-L on a score of 30.1. The 8-year-old Dutch mare (Chello II x Carmen, by Veneur) Doug owns with Laurie McRee and Catherine Winter, won The Fork at Tryon CCI3*-S last month and is making her second career CCI3*-L start at Jersey Fresh.

“She was probably as consistent and steady and mistake-free as she’s been. She’s starting to turn the corner. There’s still another two years remaining I think (to reach her full potential in dressage). It’s going to be very exciting going forward,” Doug said. “She’s insanely talented. The hardest part is keeping her totally focused on the task at hand.” 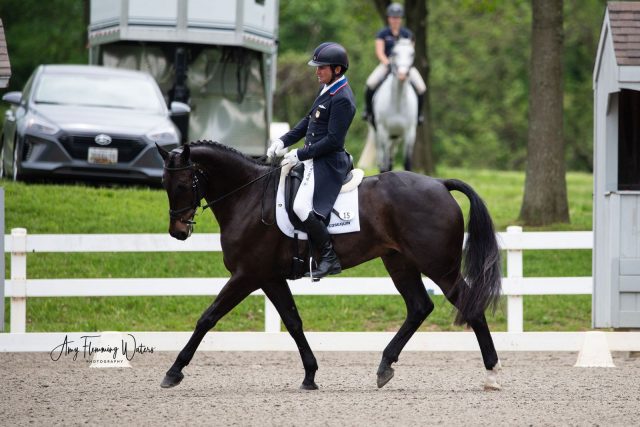 Looking to the rest of the CCI3*-L leaderboard, Phillip Dutton and Fernhill Pick Pocket, an 8-year-old Irish Sport Horse (Chacco Blue X Bracklin Mystique, by Solitair) owned by Lee Lee Jones, Annie Jones and Caroline Moran, scored 30.8 for fourth place in his debut at the level.

We have a tie for fifth place on 31.7 between Will Faudree and Caeleste, a 9-year-old Holsteiner mare (Contender X Happygolucky, by Lucky Lionell) owned by Jennifer Mosing and Sterling Silver Stables, and Alex Baugh and Mr. Candyman, a 12-year-old Holsteiner (Canto X Montara, by Corofino I) owned by Altorac Farm.

Cross country starts at 8:30 a.m. tomorrow with the CCI3*-L, followed by the CCI4*-L at 9:50 a.m. There is no live stream, but EN will be running live updates. Click here for cross country start times.

Many thanks in advance to all the volunteers for their hard work on what is going to be a very busy day tomorrow! The forecast is calling for cool, overcast conditions — perfect cross country weather for the horses. EN wishes safe rides to all. Go Eventing.