EN is delighted to follow Jon Holling’s blog chronicling his journey with upper-level prospect Ragtime Rebel, a 5-year-old OTTB gelding he found through the Maker’s Mark Secretariat Center. Ragtime Rebel (Union Rags X A.P. Elegance, by A.P. Indy) is Kentucky-bred and last raced in April 2018. Click here for his Equibase profile, and here for his introduction post. Take it away, Jon! 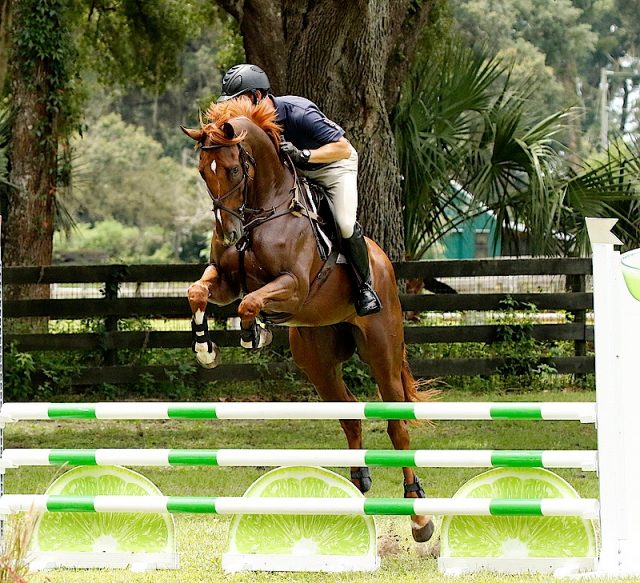 We are in the count down to Rebel’s next recognized horse trial. He heads out to the Ocala Horse trials on August 17 and 18th. So with that in mind we took Rebel over to jump around at Chris Barnard and Justine Dutton’s Nottinghill jumper show.

It was a great experience for Rebel. His first course was pretty good but he was a little tight and nervous. The great part about taking these young horses like Rebel to the jumper shows is that you can go in and jump multiple rounds. So after his first trip around, Rebel and I patiently waited for our second course. As luck would have it during that break that the neighbors across the street decided it was time to breeze their Thoroughbred on the track.

Poor Rebel hardly knew what to do with himself. The flashback was almost too much for his little 5-year-old self to handle. However, after he was informed that he would not in fact be going out for a race around the track, he actually put in an even better second course. He gave me pretty consistent jumping efforts and tried his hardest to make good shapes over the jumps. I did get one cannonball over the oxer before the double of verticals, and then at the butterflies of doom, just two fences from the finish, we had an unfortunate rail.

All in all I was really pleased with his effort all day. Here is the video from Rebel’s second round. Wish us luck at the Horse Trial!