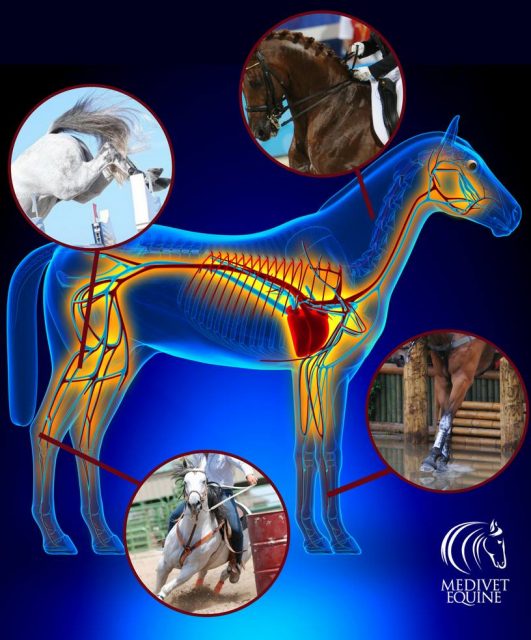 We have an eclectic mix of tidbits for you this week in Horse Health News brought to us by our friends at MediVet Equine. Let’s get to it:

A half-brother to the late great Theodore O’Connor was saved by the surgical team at the Cornell University College of Veterinary Medicine’s Equine Hospital earlier this year. Three-year-old “Henry,” who is by the Cornell Equine Park’s Dutch Warmblood stallion Waterford and out of the 13.1-hand Chelsea’s Melody, who was also Theodore O’Connor’s dam, somehow impaled himself on a fence shortly after being turned out one day. His owner, Dr. Sonja Lawlis, herself a Cornell-educated veterinarian, immediately called the team at Cornell’s Equine Hospital. After removing the piece of wood, they performed surgery to clean and repair the wound, then provided months-long intensive supportive care and fought an antibiotic-resistant infection. [Cornell Chronicle]

Equine influenza has wreaked havoc in several areas of the world this year, but the hardest hit is likely West Africa. The outbreak, which spanned from January through June of this year, took the lives of nearly 60,000 in the countries of Mali, Niger, Nigeria and Burkina Faso. The outbreak was initially thought to be strangles, but veterinarians from the international animal charity Spana were able to finally submit samples to the Animal Health Trust in June leading to a confirmed diagnosis of equine flu. The diagnosis should help veterinary professionals and local communities better manage the aftermath of the epidemic and future outbreak scenarios. [HorseTalk]

Aloe vera is commonly used in barns as a supplement to help soothe and/or prevent ulcers, but is it really safe and is it really effective? Dr. Anthony Blikslager, a professor of equine surgery and gastroenterology at North Carolina State University’s College of Veterinary Medicine, weighs in and says maybe not, but really it’s hard to know since there have been no peer-reviewed studies involving the use of aloe vera in horses. [The Horse]