Kaitlin Harford, a 16-year-old eventer from Callahan, Florida, is blogging about her journey to competing in this year’s Retired Racehorse Project Thoroughbred Makeover with her OTTB Family Foundation, better known as Sven. Click here and here to read her first two blogs for EN. 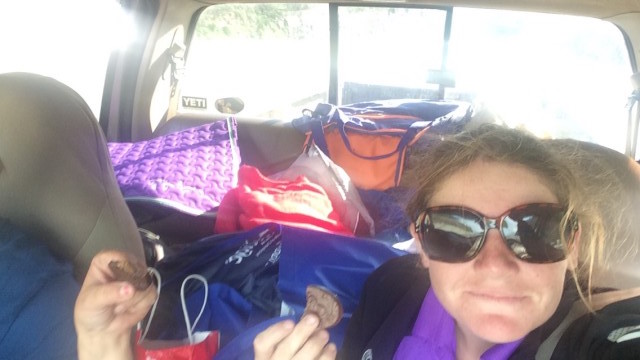 This is what your car looks like when you get a bunch of stuff, free and bought, at the Rolex trade fair!

Last month we packed up the car and headed to the prestigious Rolex Kentucky Three-Day Event. Let me say a huge thank you to C4 Belts! I was sent to Rolex by being the top selling ambassador and selling over 100 belts. Their ambassador applications are now open, and they helped me meet some of the best Thoroughbred riders ever! I hope to do as well being an ambassador for the OTTBs throughout the Makeover and past the Makeover.

This weekend I had the opportunity to see many four-star horses compete. But as a Thoroughbred lover does, I followed all of the Thoroughbreds closer to see how they performed. And I most definitely didn’t stalk their pedigrees to see if my guy was related to any of them … But guess what?! He is!

Katie Ruppel’s Houdini (who raced under Rocky Times) is actually related to Sven (who raced as Family Foundation). They both have In Reality 3 back on the dam side. Other than that I couldn’t find much, but I could’ve sworn that he was related to Boyd Martin’s Blackfoot Mystery. They look and jump just a like!

While watching a couple horses school, I realized that one of them was the one, the only, AP Prime! When I realized it was the $750 Thoroughbred, I really wanted to talk to Leah. As she was coming out of the ring I got a picture with the two of them.

I talked to Leah for quite a bit.  She was so nice and answered all of my questions. AP Prime never jumped around clear in show jumping, aside from one Prelim, until he reached the Advanced level. Leah got him as a $750 Thoroughbred as a 5-year-old, and she just completed her first four-star on him.

She was so sweet and so willing to answer my questions.  he gave me so much hope to be able to do the same thing — to be able to bring my free Thoroughbred up the levels and run around Rolex.  But not only that. She showed me how to be an inspiration to young girls who are looking up to the riders who want to be role models for them. She also showed me how to be the right type of role model. 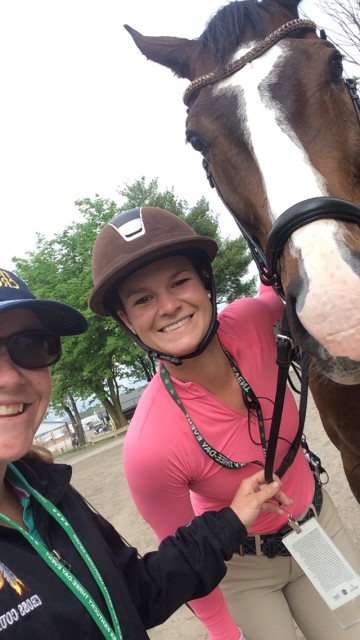 While most kids my age would head over to the Hunter Hayes concert, I had better things on my mind. I attended the Hoedown at Haygard. This Hoedown was held to support the Retired Racehorse Project and the Thoroughbred Makeover. Now let me tell you about said Hoedown. When you put a bunch of RRP competitors and Thoroughbred lovers in a room together, or in this case a arena, it is going to be crazy!

Laura, a Thoroughbred barrel horse owner, and I decided to put a Thoroughbred rap together. Then we decided to rope Kyle Rothus into it as well. I asked Lainey Ashker to join us in the rap but sadly she had somewhere to be. However it does say something about her personality and character when she told me she would have done it had she been available.

We completely embarrassed ourselves but who cares! Laura Weineck, Kyle Rothus (dressage diva) and I had the time of our lives. I made some great new friends. Watching the Equicizer racing was absolutely hilarious because of the many different styles the riders used. My personal favorite was the gallop-so-hard-you-pop-the-springs-and-nearly-fall-off.

Both Lainey and her mother, Valerie, are huge advocates of the off-the-track Thoroughbreds. Valerie Ashker is making a five-month trek from Northern California to Virginia with her 7-year-old OTTB to promote awareness for the Thoroughbred breed. Follow her journey here.

Lainey Ashker competed at the Makeover last year with her horse, Call Him Paddy. Her current upper-level horse, Anthony Patch, is another off-the-track Thoroughbred. They placed 19th at Rolex even though he temporarily forgot how to do upper-level dressage! 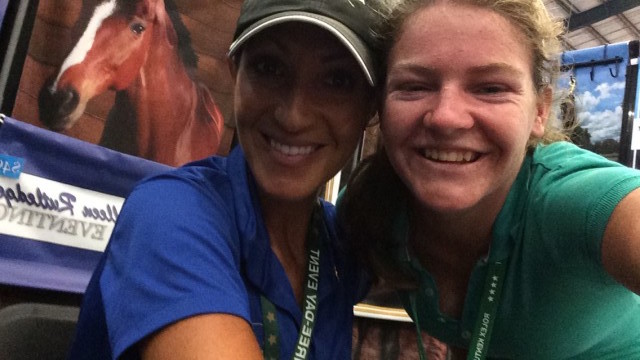 Of course everyone knows exactly who Lainey Ashker is! But let me tell you a little bit more. Whether we were in the trade fair, the dressage ring, on the cross country course, or the stadium ring, Lainey always is a crowd favorite. Lainey knows that no one is perfect, takes it all in stride, and strives to be the best she can possibly be.

Lainey takes the time to interact with her fans and took the time to talk to me about the Retired Racehorse Project, my horse, and she has helped me with my current eventer a lot as well. Lainey is another person I really look up to as a role model as far as retraining and especially working with the off-the-track thoroughbreds.

Come to think of it, I didn’t watch any actual dressage on Thursday. I was walking around and watching people school, demos and chatting with RRP people! But one of the really cool demos, I must say, actually made me a bit nervous.

Elisa Wallace got eighth place this weekend in her second four-star but the other thing she is well known for is her Mustangs. Watching her demos and how she has trained them over the course of the past few years makes you a bit nervous when you will be competing against her in both of your disciplines.

Steuart Pittman, in an article with the Practical Horseman with Tik Maynard, was asked what professional riders he would like to see compete in the Makeover. He listed names like Buck Davidson, McLain Ward and more. But what Steuart said would be best would be for an unknown teenager to come in and sweep it all.

That is now my goal, and I really studied Elisa’s demo the following day to see how she asked for the commands for the tricks and came home with even more tools in my toolbox to work with Sven all the way through to the Makeover.

Both my horses are about to be put into major dressage boot camp. Sven is just working on building up the basics and will be schooling some cross country through the next month. We should have another show coming up soon as well, so keep a lookout for that!