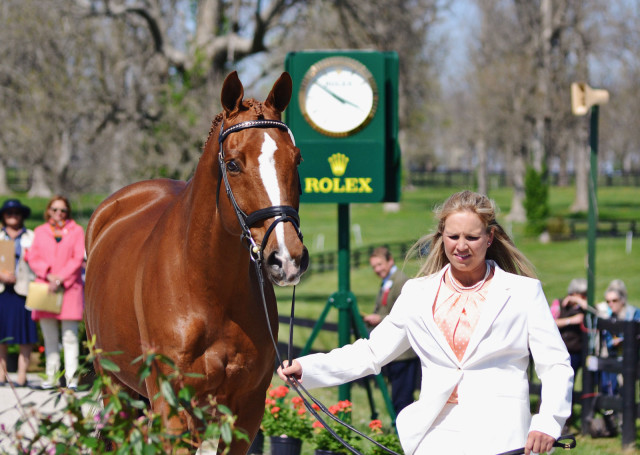 Three Rolex bound pairs contested the Advanced division at the Texas Rose March HT this weekend, and it was Julie Norman and Consensus who led from start to take home the blue ribbon in their final prep run for Kentucky.

Julie found herself in the lead with “Thomas” after scoring a 31.8 in the dressage and didn’t look back, accumulating 6.4 time penalties across country today to secure her win. Alyssa Phillips and Bliss III finished second on the weekend on a final score of 40.5. This was Alyssa and Bliss III’s second Advanced together, so they’ll be thrilled with this solid finish.

In third place in the Texas Rose Advanced are Rolex Rookies Angela Grzywinski and Novelle, who moved up from fifth to third with just 4.8 time on cross country today. Also headed to Rolex, Ellen Doughty-Hume and Sir Oberon finished their weekend in fourth place with a final score of 46.9.

In second place are Lisa Marie Fergusson and Honor Me, who jumped from seventh to second with the only double clear cross country run of the division. These two finished on a 31.3 for second place over Diana Burnett and Diamond Cut III, who picked up six time penalties on cross country to relinquish their overnight lead.

Canada’s Jessie Phoenix rounds out the top five in the Open Intermediate with Abbey GS and Bentleys Best, respectively. These two finished on a 33.0 and a 36.1 to move up a few spots to fourth and fifth to end the weekend. 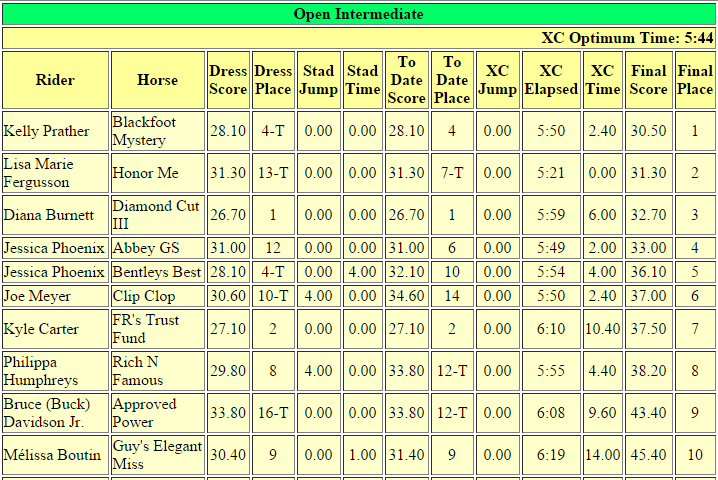 Topping the Intermediate Rider division at Rocking Horse is Sable Giesler and Devil Munchkin, who steadily moved up throughout the weekend to clinch first place on a double clear cross country. This pair ended their weekend, Devil Munchkin’s first complete Intermediate, on a final score of 30.8.

Bailey Moran and Loughnatousa Caislean moved up from fourth to second, also with a double clear cross country, to finish on a weekend total of 34.6. Bailey and Loughnatousa Caislean are eyeing a move back up to Advanced after ending their debut early  last month but have been taking the time to ensure their confidence is at a peak when they pull the trigger again. It certainly looks like these two are meshing well and will be ready to step back  up to the big A in no time.

Rounding out the top three in the IR are Sarah Dunkerton and Old Man Moel who also logged a double clear to finish on a final score of 39.4.

The course proved to be very tricky for the IR division, with five riders completing, four eliminated and one falling.

Nicole Doolittle and Tops are the winners of the Intermediate division at Full Gallop, which ran its March II event this weekend. Nicole and Tops led from start to finish, adding just two time penalties to their dressage score for a total of 26.6. 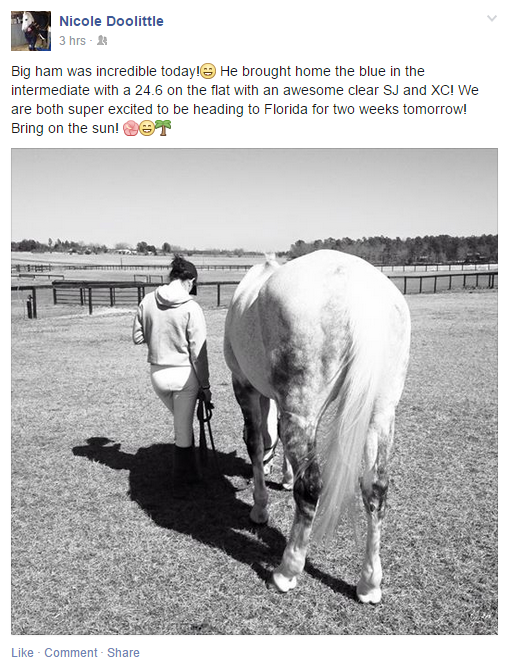 Lindsay Mahon and Playtime finished in second place for the weekend, moving up from third after show jumping for a weekend final of 49.4. This was the first Intermediate start of the year for this pair, who has collected two fourth place finishes at Preliminary so far in 2015.

Kelli Temple and Matilda complete the division in third place. This pair is also contesting their first Intermediate of 2015 together; most recently the mare finished second in the Prelim at Pine Top.