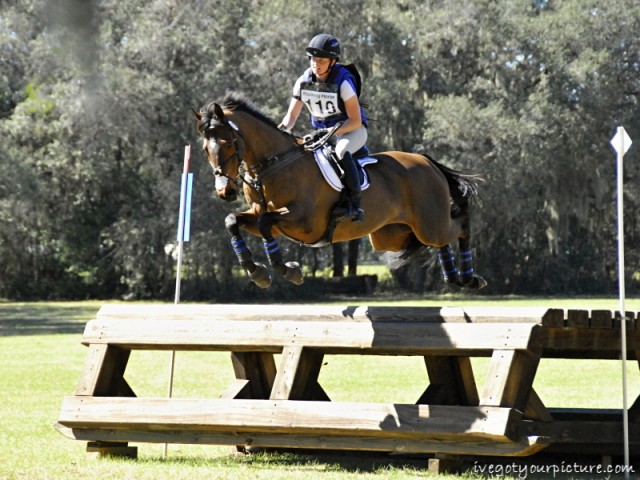 Julie Wolfert enjoyed a breakout 2013 season with her 13-year-old OTTB gelding, Buenos Aires. The pair campaigned primarily at the Intermediate and two-star level in 2013 and took home third in excellent company in Buenos Aires’ Advanced debut at Richland Park. This year, Julie and Buenos Aires were named to the USEF Developing Riders/Eventing 25 list, enabling them to travel to Ocala to participate in lessons with US coach David O’Connor. This was the first time that Julie has been named to a training list, and she traveled from her home base in Bucyrus, Ks. to Ocala with a firm determination to learn as much as she could in preparation for campaigning Buenos Aires at the Advanced level this year.

“I applied for the (USEF Developing Riders/Eventing 25) list because I was trying to apply for various programs,” Julie said. “I was happy and honestly a bit surprised to be named to the list. I was very excited because it really gave me a chance to go back to East Coast eventing.” Julie previously spent time working for and learning from Emily Beshear, and she felt that this exposure to the East Coast eventing scene was helpful. “I really felt like getting the experience (with Emily) was a big help in preparing me for the upper levels.”

While the Midwest areas offer many great events throughout the region, there are not as many offerings at the upper levels as one might find on either coast. For this reason, Julie travels long distances to compete on the upper level circuit. She will host schooling shows and fundraisers at home to help raise money for her trips to competitions. Julie also has a thriving training program at home, so she has a lot to juggle when she maps out her competition schedule. “I try to get in as many lessons and training rides during the week so that I am able to travel on the weekends to compete,” she said. “If an event I am traveling to offers lower levels, I will also take some students with me to help get them experience at other events and also to help split the cost of traveling so far.” Days off are not a regular part of Julie’s schedule, but she has buckled down and created a routine that requires hard work but allows her to continue advancing her competitive career. 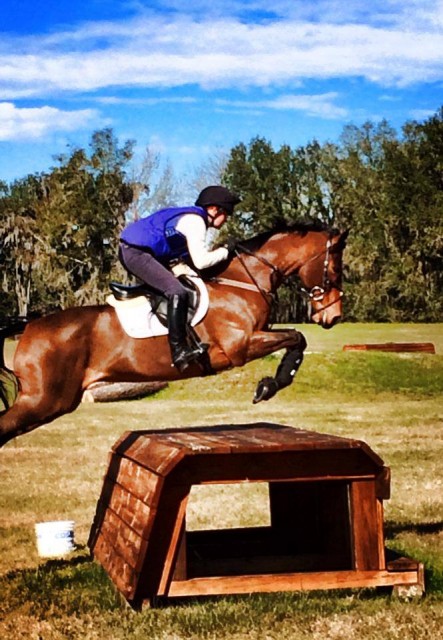 Julie was quite pleased with her lessons with David O’Connor. “He worked on my position a lot and really emphasized keeping my horse straighter,” she elaborated. “He worked with me on using my horse’s hindquarters more and loosening him up so that I did not over bend him or use to much flexion through the poll.” Julie also commented on David’s affinity for technical correctness. “He asked us how many meters from the corner a 20-meter circle should begin, and exactly where we should be touching the rail on our circles.” Riding drills and working tirelessly on perfecting the technical aspects of dressage tests was something that Julie found helpful. “It’s not something we necessarily think of at all times, but this has really put things into perspective and changed the way I look at a test when I am preparing to ride it.” Riding a technically correct test is an area that David has stressed the importance of, as many points have been left on the table in the past because of this. Julie plans to continue working on these concepts at home and also will introduce these concepts to her students. “I think it really makes you more competitive when you are striving to be correct, and it really makes you ensure that your horse is underneath you at all times.”

Julie ran Buenos Aires in his second Advanced at Rocking Horse II this month and plans to continue his 2014 campaign in the CIC3* at Red Hills before making the trek back home to Kansas. From there, she plans to run the CIC3* at The Fork and the CCI3* at Jersey Fresh. “He really eats the fences up on cross country. I felt that Rocking Horse was a good prep for him, and I should be able to open him up a bit more at Red Hills,” Julie said. At home, Julie does not have access to much in the way of cross country schooling at the level she needs, but fortunately Aires is not the type of horse that requires a lot of schooling. “He’s pretty good with a lighter schedule. The only thing he really needs to see consistently is the show jumping, and we are always working on fine tuning the dressage as well.”

Julie hopes that Buenos Aires will enjoy competing at the Advanced level. “I think he has several seasons on Advanced in him, and I am excited to see where we can go from here.”