Justine Dutton may not be related to Phillip, but she’s making a name for herself in her own right. After briefly leaving the sport to pursue a career in stunt riding for films, Justine has returned to eventing with two really exciting horses. Kudos to Justine for never giving up on her dream! 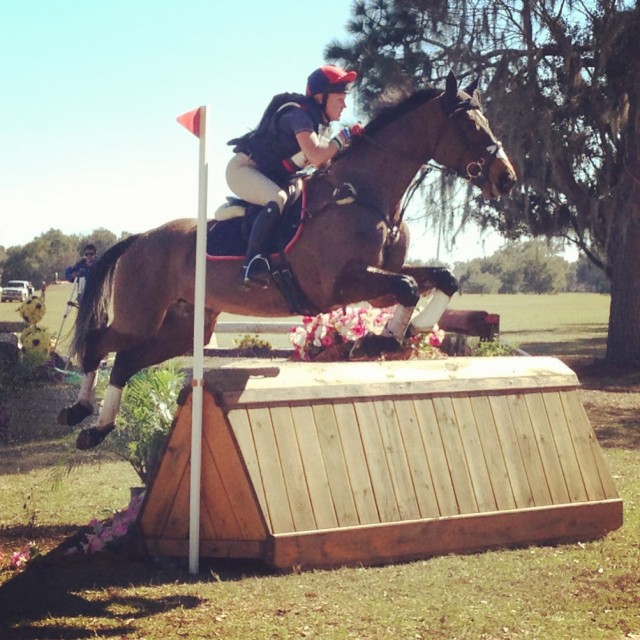 When I tell people my name, the first question I am very often asked is, “Oh, are you related to Philip?” my answer generally being “No, sadly not.” My name is Justine Dutton. I am from the UK but am now living in Pennsylvania and spending the winters in Florida, the land of sunshine and palm trees and not that of ice storms and earthquakes like another hot destination called Aiken. My winter home is at Rocking Horse Stables, where my horses and I are lucky enough to live and compete for the cold winter months.

I have been riding since I could walk but only seriously eventing since I was 19 (longer ago than I care to admit), spending my childhood years in England competing in show jumping, dressage, showing (kind of like American hunters) and even polocrosse, as well as some eventing and hunting. After years at a strict girls boarding school and spending some time living and working in London after graduating, I spontaneously up and left with a friend to go and work with horses at a riding school in Canada where I arrived with literally $100 to my name. That was the first rung on my ladder, of which I would learn all too quickly that I would be constantly falling off of before I made it any further. After spending a few years riding, learning, working and generally busting my ass in Canada and then the USA for various show jumpers and eventers, I eventually was able to build enough of a reputation and small client base to start my own business and go out on my own.

I have had a very successful career in eventing, competing up through CIC2* on various horses, taking home many top-three placings, year-end awards and three top-10 AEC finishes at the upper levels. However, as those of you who are not fortunate enough to come from trust funds or families with open checkbooks can understand, this sport can at times be incredibly frustrating. Making ends meet to be able to pay bills is unfortunately my number one priority in life, which more often than not has meant I have had to sell horses on before I was able to get to the next level and have to constantly sell myself short in the hopes of getting another ride. It is very humbling (and maddening) to one moment be on top of the world with three upper-level horses to six months later having a couple of novice horses to kick around, knowing that you have the talent and drive but not quite being able to figure out the right formula to make it all happen without living on a park bench.

Last year, I found myself in exactly that position after losing the ride on a horse that had been particularly special to me. I am sure I am not the only one that has gotten to a point where you ask yourself, “Why do I keep trying to do this when I end up back in the same place every time”? I made the decision to stop competing last April and even started to look into taking my life in an alternative direction. I started to investigate the possibility of getting involved with stunt riding and horses in movies; I knew I didn’t want to be done with horses completely, but I felt I owed it to myself to at least explore other avenues. I even managed to land myself a role as a stunt double to an actress that I was teaching to ride in a western movie and an audition for a national commercial! 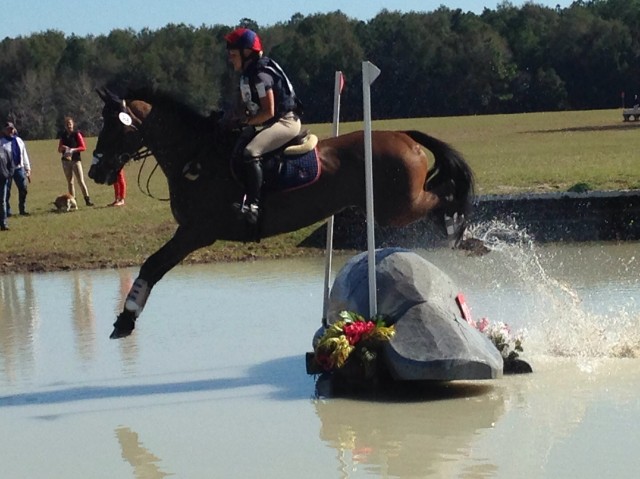 After much soul searching and a few serious kicks in the ass by some great, supportive friends and peers in the industry, my love for eventing won, and dreams of Hollywood were put on the back burner. I decided to get as creative as possible to make things happen. I knew I wasn’t a quitter; I am a go getter and am stubborn and pig-headed enough that I knew I could find a way to continue on the road I was supposed to be on.

After much begging, pleading, blood, sweat, tears, a whole lot of creativity and an amazing support system, I found myself with two incredible horses and some absolutely amazing owners. I currently own Huck Finn with Patricia Weiser, who has been one of the most supportive and generous people I have had the honor of knowing. “Finn” had not competed in three years due to his owner’s busy schedule; I started riding him for his owner last fall to prepare him to be sold. I thought he was a special horse, and when I took him to my trainer Buck Davidson, he told me that if I didn’t buy the horse he would!

Patricia very kindly offered to help me out, and Finn has been everything I have hoped and dreamed of. He is a 13-year-old OTTB who is probably the most amazing jumper I have ever sat on. I did a couple of Preliminaries on him last fall before the season ended, where he finished in the top four each time, and then did the Intermediate/Preliminary at Rocking Horse to start the season this January, where he finished second! I moved him up to Intermediate at Ocala, where he flew around like a rock star for another second place finish, and then he again finished second at Rocking Horse II in the Intermediate there! Next on the agenda is Red Hills and the CIC** at Poplar Place, hopefully aiming for the CCI2* at Jersey Fresh. Beyond that, I don’t know — perhaps an Advanced move up later this year, but we will see.

I also managed to sell my soul and put together a syndicate to buy a very cool 15.2hh 10-year-old British Sport Horse mare by Jumbo in England. I sold shares for as little as $500 and even refinanced my truck, so needless to say, she has A LOT of owners! Jollybo and I are currently getting to know one another at the Preliminary level and have had some great top-six finishes this winter; not bad considering I have only been riding her since the end of December. I will aim to do a CIC* with her this spring, then move up to Intermediate.

I am often asked by my friends in the industry how I manage to get horses, owners and to keep climbing the ladder without a massive financial backing. My advice to them is always to never give up, be creative and never be afraid to ask. And mostly, to never stop believing in yourself. I may not be an Australian “Dutton,” but I think being a British “Dutton” is pretty awesome too.