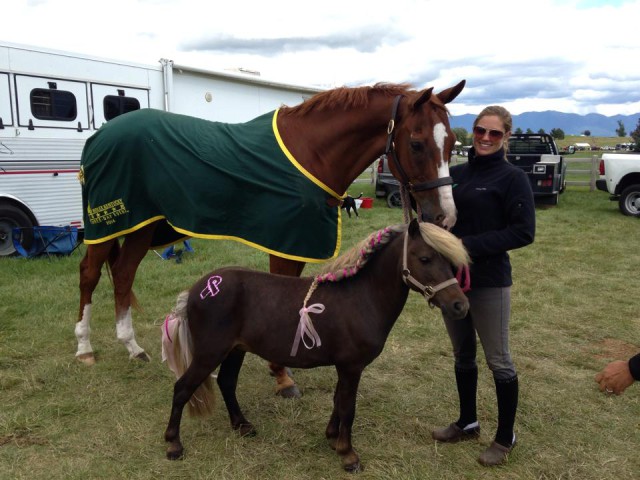 Katie Frei received a very peculiar FEI yellow card at Rebecca Farm for “incorrect behavior/endangering other competitors,” but that doesn’t tell the whole story. You’ll notice there’s no division or horse name listed with the yellow card violation on the FEI’s website. That’s because the horse in question doesn’t have an FEI passport, and he didn’t compete at Rebecca. In fact, he’s too small to be ridden.

The culprit is Spartacus, a Miniature Horse and traveling companion to Katie’s neurotic upper-level OTTB Houdini, who competed in the CIC3* at Rebecca last month. Houdini and Spartacus, owned by Katie’s husband, Sven, became fast friends last year, and Katie found that with Spartacus at his side, nervous Houdini became a totally different horse.

“This mini has been a godsend for Houdini,” Katie said. “He has enjoyed a pretty successful career thus far, but it hasn’t been without a struggle. The traveling and competing takes a huge toll on him physically because he’s so wound up. He was always underweight and battling ulcers. Since he and Spartacus got together, he’s gained at least 100 pounds.”

Since Houdini typically goes off his feed at competitions, Katie didn’t think twice about bringing Spartacus to Montana, as she’s brought him to many venues previously without any problems. “We were basically traveling for two weeks; that was too long of a time for Houdini to go without eating, and with Spartacus there, he ate every meal,” Katie said.

But when Spartacus got loose for about 15 minutes on Thursday morning at Rebecca, spooking a horse in the process, event officials called a meeting after the first horse inspection, ultimately giving Katie a yellow card for “incorrect behavior/endangering other competitors.”

Allegations were made that Spartacus had been loose the night before the incident after officials saw this photo on Katie’s Facebook page — you can see the horse is actually on a pink lead rope — but they were more upset that she had not received approval from the organizers to bring Spartacus to Rebecca.

“I regret not doing my due diligence, and, for that, I should have some type of punishment,” Katie said. “I am starting the Eventers Bad Girl Club, since I just can’t seem to stay out of trouble.” This is Katie’s second yellow card this year, as she also received one at Red Hills CIC3* in March for “abuse of horse/excessive use of bit.”

“After a refusal, Houdini bolted — straight towards the ground jury actually — and I pulled up hard,” Katie said. “He began to back up, and they constituted that as horse abuse. I’m not saying I was in the right there either and did not deserve a warning of some type.”

Mary King’s two-month suspension after receiving two yellow cards in the same 12-month period caused an uproar earlier this summer, and while Katie has also received two yellow cards this year, she won’t receive a suspension, as they were given for two different offenses.

Katie said she apologized profusely to the organizers and officials, and she decked Spartacus out in pink and campaigned for Halt Cancer at X donations on her Facebook page in an effort to smooth things over. The incident won’t deter her from hitting the road again with Spartacus, Katie said, though she’ll be sure to secure the proper clearance in the future.

“Before Spartacus, Houdini hadn’t been able to be turned out for more than a few hours at a time because he would run and run,” Katie said. “Now he can live normally because with his little buddy, he’s totally calm. I definitely think that Houdini is one of the more high maintenance four-star horses out there, but he’s my only four-star horse, and I’ll do whatever it takes to make sure he is happy and healthy. From now on, I will go through the right processes to ensure he can travel with his beloved mini.”

EN has long lamented the need for an overhaul of the FEI’s yellow card system — here’s one of John’s more famous rants on the subject — and Katie’s yellow card at Rebecca serves as an excellent case study for why reform is needed. Should FEI officials be able to award yellow cards for an incident related to a horse that is not even competing? Would they have awarded a yellow card if it had been Houdini who got loose?

And then there’s the issue of woefully inadequate, short descriptions of why a yellow card is given. In Katie’s case, “incorrect behavior/endangering other competitors” could lead people looking at the yellow card list — which is publicly available on the FEI’s website — to jump to a wide range of assumptions.

Did she mow down competitors in warmup? Push someone into the water jump on a course walk? Set fire to a barn aisle? Without enough information to get a clear picture of why a yellow card is given, people reading these reports will jump to conclusions, which only creates confusion.

What do you think, EN? Should Katie have received a yellow card for Spartacus’ antics? Should the FEI list more information about a violation once a yellow card is given? Will you be able to sleep tonight for fear that a hell-raising Miniature Horse will haunt your dreams?

Weigh in with a comment below. Thank you to Katie for helping us shed some light on this bizarre yellow card, and if you want to join the Eventers Bad Girl Club, please shoot her an email at [email protected]. She’s currently seeking new recruits.

Update: 6 p.m. EST: We’ve just been informed that little Spartacus is a stallion. It seems like campaigning for testicular cancer research a la our good friends Balls of Steel would have been a more appropriate way to apologize to officials. What do you think, EN? Does that change your opinion on whether or not a yellow card was appropriate? Or are you still #TeamSpartacus?