Thoroughbred racehorses that go on to second careers are unique in that they have two retirements in their lifetimes: the first from the track and the second from the show ring. Thoroughbred Legends seeks to honor off-track Thoroughbreds that went on to accomplish great things as upper-level eventers and now enjoy a second retirement in their golden years. If you know of a great Thoroughbred for this series, email [email protected]. 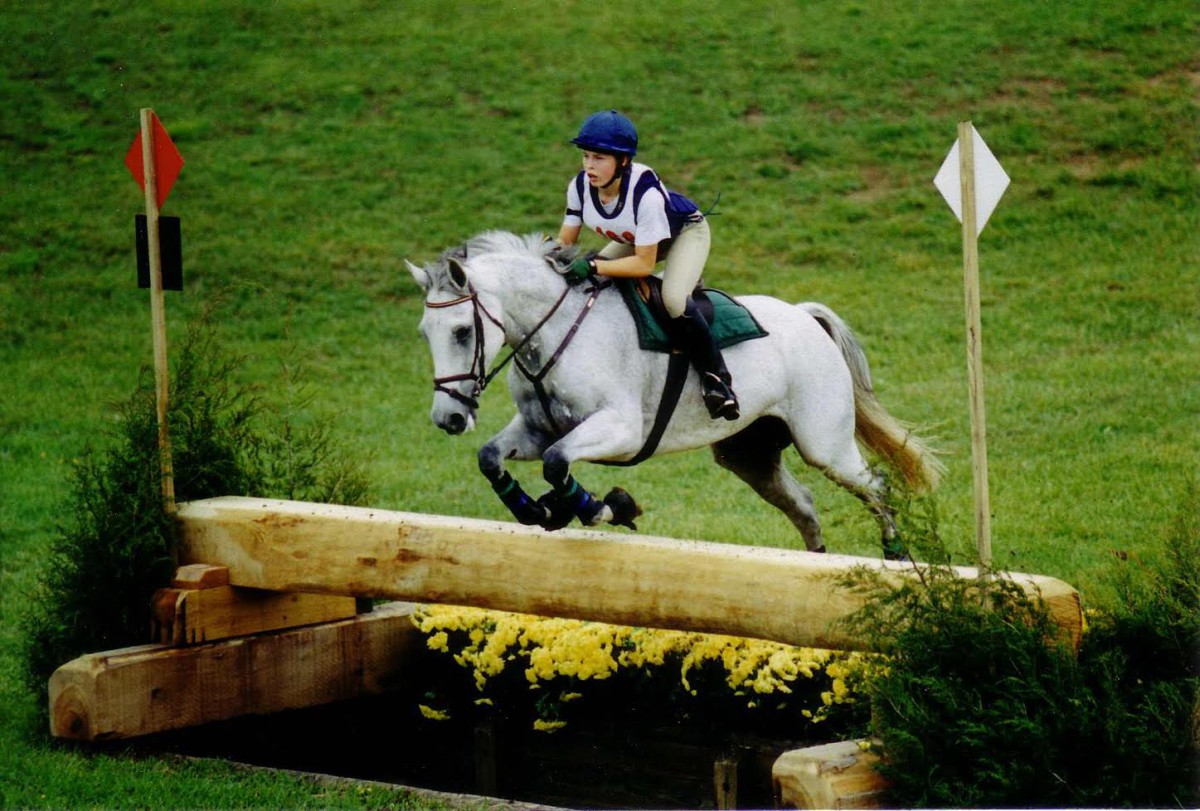 A beautiful grey filly was born in 1990, a daughter by Loverboy Leslie out of Please Try. While she was meant for racing glory, it was not meant to be, and shortly after beginning her racing career, it was cut short, and she was shuttled into a career as a sport horse. Soon, she was talent spotted by Courtney Cooper, who recognized an athlete at once, and proceeded to form her into a top-level eventing champion.

The mare turned grey to white and topped out at 16 hands. Courtney re-dubbed her Stella, going with a simple and classic name to begin her eventing career. Stella started eventing in 1995, progressing through the levels to CCI2* in only two years. In 1997, the pair placed 18th at Radnor CCI2* and shortly afterwards completed three Advanced horse trials.

Lucia Strini was searching for her first horse in 2000, as she was growing out of her Novice level pony, Natty Bumpo. Her coach, Kim Severson, knew it was time for her to move up to riding a horse and took her to try the grey mare, who was truly a gentle soul.

“I vaguely remember seeing her go cross country at Morven Park and was very excited to try her,” Lucia said. “When I tried her, we jumped little show jumps, and she had an extended trot that was amazing, and I just loved her. Kim did a great job finding the right horse for me, and that’s why Stella came to me — to become my new teacher”.

Stella was Lucia’s first experience with mares, and so there were no pre-conceived notions about mare behavior. Stella was first and foremost a lady and secondly a horrendous cribber. She had strict rules about having her girth tightened and pretty much felt that it was unnecessary at all times. 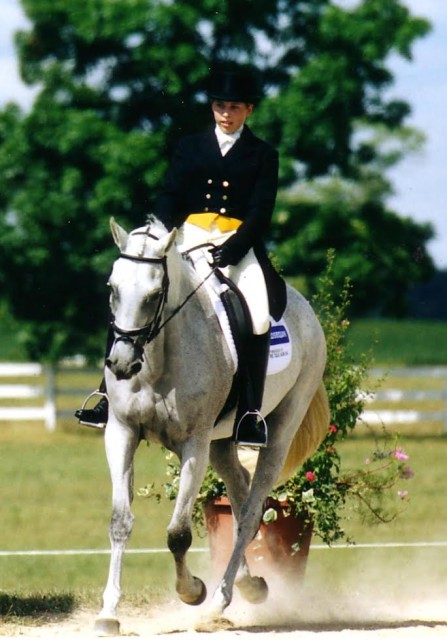 Lucia & Stella competing in the dressage at NAJYRC. Photo by Linda Wachtmeister.

Lucia and Stella competed in their first event at the Novice level in 2001 at Sporting Days in Aiken. They placed third, and on that performance moved up to Training, winning their first three attempts at that level in a row. Stella loved eventing, and while her favorite was certainly the cross country (and the steeplechase in particular!), she was also known for her dressage skills.

“I remember thinking that she was the most amazing dressage horse,” Lucia sad. “Her normal trot was nice, but she’d turn on that extended trot and WHAM, she was the fanciest girl out there!”

It wasn’t all blue ribbons and red roses, however, as Stella certainly made Lucia work for it sometimes. She had a horrible left drift that only got worse the faster she traveled. She regularly dumped Lucia in stadium warmup, directly into the oxers.  “She was a schoolmaster in all the right ways; she taught me lessons but then was there to take care of me when I needed it. I have many memories of demolishing jumps as she slammed on the brakes because I missed or leaned up her neck.”

In 2002, the pair moved up to the Preliminary level and headed for Lucia’s first CCI* at the Virginia Horse Trials. Lucia was very nervous about roads and tracks, as well as the steeplechase, as she had very little practice jumping at that speed. “Stella knew exactly what to do. I think all I really did was hang on as she tore around the track. There’s really nothing like galloping a Thoroughbred! I will always remember the feeling of galloping her; it was like her speed was limitless.”

They finished in fifth place on their dressage score and earned a trip to the North American Junior and Young Rider Championships for Area II. They repeated their performance there, getting a bronze medal for the team and placing fourth individually in the junior division. 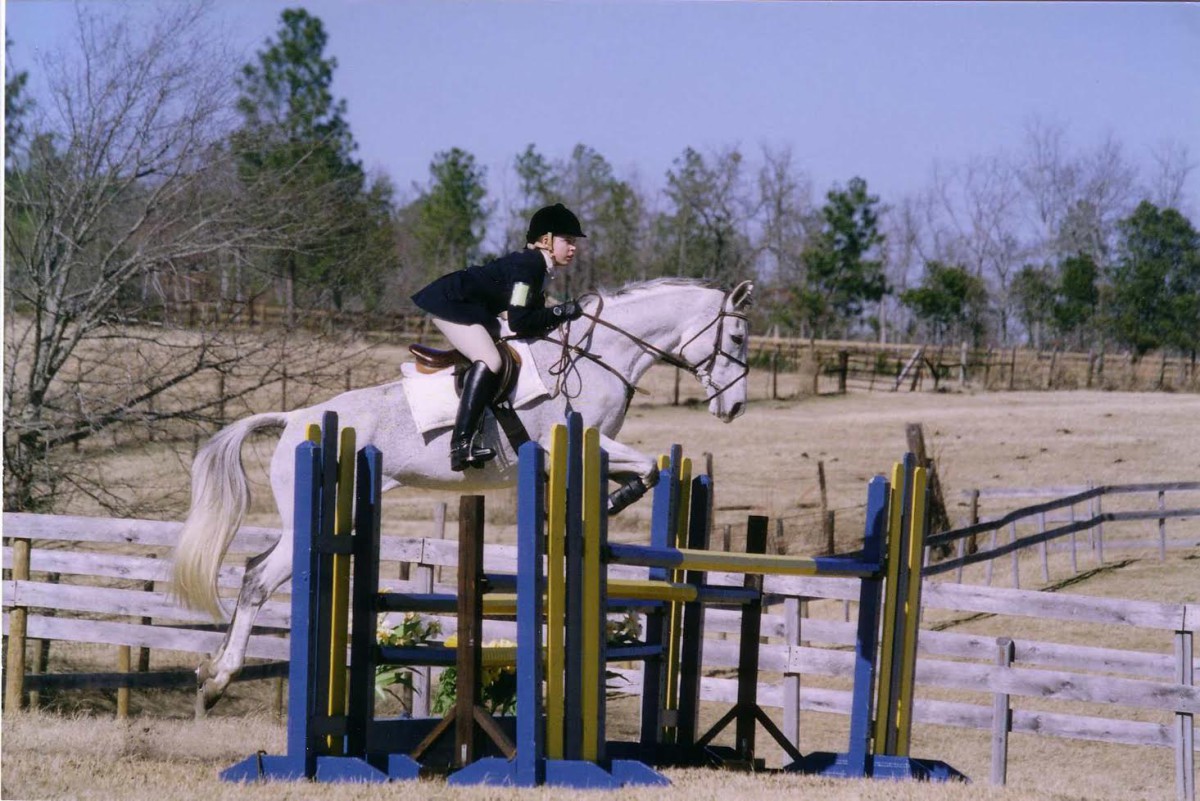 Continuing their success, in the spring of 2003, Lucia and Stella moved up to Intermediate at Pine Top. Stella had a habit of trotting through the water complexes and nearly scared the pants off Lucia by dropping in at Pine Top and casually trotting the two skinnies in the water and then continuing on her way. They placed fifth in that competition, finishing with just a little cross-country time to add to their dressage score.

After showing Lucia the ropes at Intermediate, Stella decided that she was more interested in a lower-level career and semi-retired to coach a younger girl and practice her dressage skills. For Lucia, it was very sad to realize that their time was up, but she appreciated all that the mare had taught her, she said. As her first horse at the upper levels, Stella was irreplaceable.

“She was the one that taught me that stereotypical horse riding lesson: how to fall off and get back on. I fell off her A LOT, but then she also won me a lot of blue ribbons and gave me a taste for competition. She taught me how to sit the trot and how to gallop. She taught me when to call it a day when things weren’t going well and in the end how to make the best choice for my horse.”

“She was my first horse and is the reason I’m still out there, still loving this sport, because she taught me well and took care of me,” Lucia said. “I wouldn’t say I’m a mare person, but I always give them a chance because of her. Stella was really the best.”