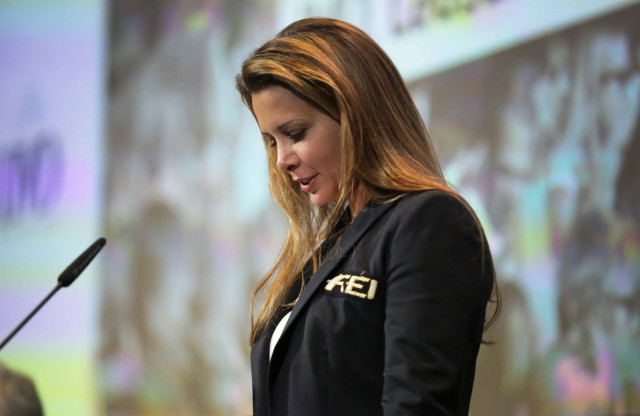 Poor Princess Haya. Girl’s been looking forward to her December 2014 farewell party for probably eight years now but the FEI General Assembly keeps blocking her exit. Imagine being the bigwig at some company and, on the day you’re set to retire, getting duct-taped to your office chair by your own employees, who are like, “Nope, sorry, that doesn’t really work for us.”

Further complicating things is the fact that, considering the umpteen doping scandals her shady Sheikh husband has been involved with since she took office,  a graceful peace-out is probably a smart career move. And it’s not like the public is exactly clamoring for her to stick around — you may or may not have repressed the memory of EN’s open letter to the power-couple last September. An except:

First, please know that we are huge fans. Princess Haya, you have the greatest collection of fancy hats and it was so awesome when you stuck up for gay sporthorses! Sheikh Mohammed, you continually crack us up with your hilarious scowls and grumpy faces. Sure, we’ve given you a hard time in the past, but it’s all in good fun.

We know you’re having a rough year–the little doping thing, and now nobody wants the Princess to be president anymore, etc. Maybe it’s time to take a little vacation from the horse thing, eh? You know, try something new, explore the unknown. There are so many other Olympic sports out there that could benefit from your money, power and smooth charm.

Also, lest we forget, Princess Haya tried to preempt this whole mess when she was initially elected in 2006. Perhaps already sensing that the General Assembly would to try to hold her hostage down the road, the very first thing she did was propose a presidential term limit of two four-year stints. At the time, the General Assembly acted like this was a swell idea, passing the motion and incorporating it into the FEI Statutes.

She was reelected in 2010, but as the clock of her grand finale started running out, the General Assembly began backpedaling. The Princess was pretty, sweet and, most importantly, a zillion times more loaded than all the rap stars in the world combined. Princess Haya, FEI President FOREVER!!!

Fortunately, rule-bending is a favorite pastime of the powerful. In 2013, despite growing opposition from its constituency, the FEI got together in Switzerland and drew up a petition calling for an “Extraordinary General Assembly” that could change the term-limit statutes back to the way they were.

One-hundred National Federations signed the petition, including representatives from such important horse capitals of the world as Mauritius (an island about 1,200 miles off the coast of Africa, best known for being the sole habitat of the now-extinct Dodo bird), Sudan (the Sudan Equestrian Federation doesn’t have a website; however, 12 people have “liked” its Facebook page), Chinese Taipei (they’ve never sent an equestrian team to the Olympics but there’s a first time for everything!) and, of course, Jamaica (often described as “The Lexington, Kentucky of the Caribbean”). Read EN’s full recap of the debacle here.

In a statement from Princess Haya released earlier today, she explained that her “resolve was weakened” by the FEI’s creation of a extra-special rule-bending assembly signed by 100 countries that may or may not have actual horses living in them. She went along with it for a few months but, today, finally informed the FEI that enough was enough. When her term wraps up in December, she’s out.

“The factors that have led to my decision not to seek a third term are, for me, impossible to ignore,” she wrote. “I committed to a term limit, and that commitment still weighs heavily on me. However, most importantly, as I said in the EGA, I needed to see if a third term would work with my family.”

Way to put your glass-slippered foot down, Princess Haya. You made a commitment, and you’re not going to let the FEI’s puppetmasters sway you from your convictions.

But this is the part that really warms the heart: “I have needed to put aside some of my work for the FEI to concentrate on humanitarian relief to Gaza and other work in that sector. And I feel that this is just the beginning … To fulfill my commitments to humanitarian work and to raise my children with the time to love them seems truly overwhelming; it is clear to me that I cannot in good faith promise to give my all in each of these areas while also continuing to be the hands-on President that the FEI needs and deserves.”

Translation: Instead of suffering through another four years of soul-sucking international equestrian politics, Haya is setting out to do something good in the world, something important, something meaningful. She’d rather go work in a freaking war zone than spend one more minute hobnobbing with you goons.

Read her full statement here. So what’s next for the FEI? Haya will finish out her 2014 term with dignity and grace, and a new president will be elected at the General Assembly in Baku, Azerbaijan, on December 14. The deadline for candidates to register their candidacy with the FEI Secretary General is September 1, 2014. Know anyone who might be interested? We might have an idea or two… stay tuned, EN!