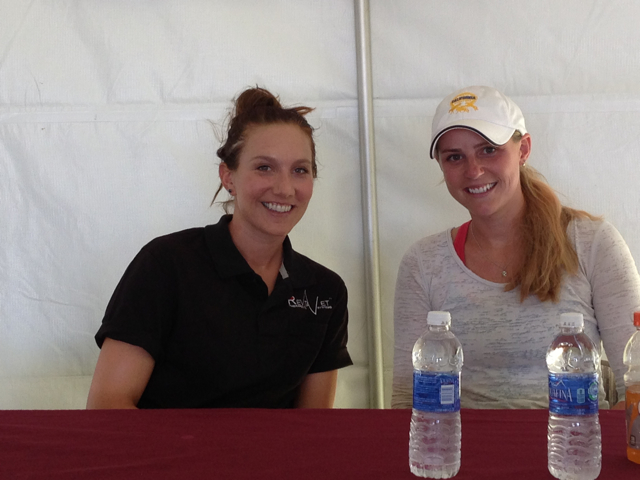 Today’s press conference was unlike the usual, sometimes rather stiff question and answer affair;  best friends and barnmates Katy and Emily brought along some more friends, Bill Olson and competitor Jordan Taylor, and we all got carried away and chatted happily for almost half an hour! Katy, lying first and second on Oz Poof of Purchase and Oz The Tin Man respectively was first and last to go in the division so she said she didn’t get a chance to see much, “Being first and last I was so focused on going out on the first one, then coming back and getting one horse cooled down and then on and warmed up on the next horse that I actually had no idea about what was going on out on the course. It wasn’t until I was going to the box on my second horse that I heard them announce that my first horse was in the lead and I started crying! But that was the first I was aware that there had been problems.” Between them Katy and Emilee had the only three rounds inside the time today, and for Katy, bringing both of hers home without penalties wasn’t entirely a surprise, “Time for them is typically not an issue. I did have to pay attention to my minute markers and focus on really riding forward, but I was forward enough around the course that I was able to come home quietly and actually give them a bit of a breather on the way to the finish so that they came in pretty cool and calm. Personally, I’m exhausted! I’m more exhausted I think from the adrenalin from the physical riding. I was on my second horse (Oz The Tin Man) coming home and by the time I got through the last water my legs felt a little wobbly but I’ve been riding him for ten years and we have a really good partnership so we kind of worked together to come home safe.”

When asked to talk about Ian’s courses Katy answered simply, “Kick! And go forward!” but then she elaborated, “I really like that he kept a lot of the same ideas from last year with a few modifications and improvements. Ian doesn’t try to trick the horses or riders, he’s very much into testing boldness and bravery. This was a typical Ian course;  I love them and my horses do too. I love that you can come out of the box, hit a stride and pretty much keep it the whole way round. “ 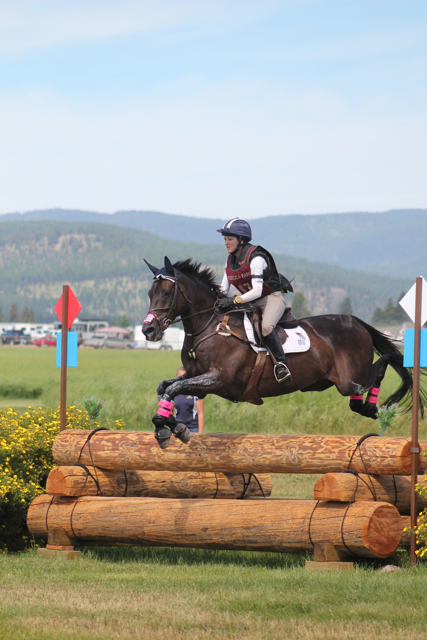 Fellow HB Eventing team mate and “besty” with Katy and Emilee, (her words not mine!) Jordan Taylor (above on Cambridge) was at the press conference, supporting and taking pictures. Hawley had seven clear rounds out of seven rides in the CIC3* today, and last time I checked in with her she still had a flawless record across all the other divisions also. Katy talked about living and competing with the crew, “It gets busy, obviously, we all have schedules to work around but we try and help each other out. Why it’s such a fun atmosphere is because we’re all fairly similar in age. We’re a fun gang, even when we’re not at the barn we’ll hang out. On any given day you’ll find twelve of us in somebody’s house around a pot of spaghetti.”

Emily was taking her ten year old Nonsensical around only his third advanced today, “He’s still a little green with all his lines and stuff but he attacked everything. He was in front of my leg and he was awesome.  After every combination I just gave him a pat, screamed ‘Good Boy!’ and shortened my reins! After the combination at 9 his confidence just grew the whole way round which is an amazing feeling, especially at his first 3*”  The combination tackled Nonsensical’s  first FEI event together at Rebecca Farm last year when they won the CIC** and Emilee said he felt even better this year in the 3*.

Emilee is cautiously optimistic about the show-jumping phase with Nonsensical,  “Well in this footing…. (Premier Equestrian) last year he jumped very well off it, it was like he was on springs but I think he was a little shocked about how big they were so he thought he had to jump an extra two feet over the first three, which would be fine tomorrow, I just need to hang on! He’s a very good jumper but he’s young, he still gets a little strong, he’s learning a lot so I’m excited but I’ll definitely need to hang on though!”

Emilee is a transplant to the West Coast Eventing and addressed the differences between California and East Coast eventing, “The footing in California is all sand whereas over there it’s grass but it’s usually deep and muddy and raining all the time! The riding is mostly the same but it’s a whole different atmosphere, I don’t even know how to describe it. It’s really nice to come back to Montana because it reminds me of being on the East Coast again, and I usually see some people from back home here. I don’t know if I’ll ever move back to the East again, I kind of like it here with my Cali crew!” 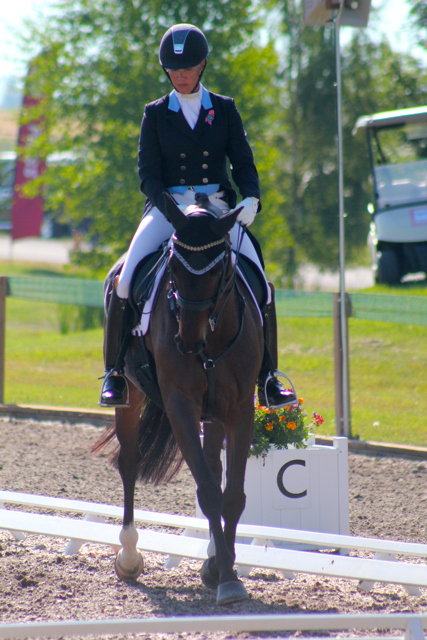 Katy: “I’ve been told you can spot the California girls on the East Coast a mile away because of the bling!”  Tamie Smith represents beautifully.

Although Katy’s horses are full brothers, as she told me on Thursday they each have completely different personalities, “They each have a different way of going, it’s pretty subtle. To watch them you’d say they were both pretty forward, brave and honest but I have to treat each of them a little differently as to how much I can take charge, and how much I can say, ‘Okay, I’m not going to bug you about that, we’re going to just keep going’. The nice thing about them both though is they’re not horses that are easily intimidated, it takes quite a bit to rattle them so even if you have a bad jump here or there I might smack them and move them on, but I’m not worried that they’ve been shaken up by it , they’re both very forward thinking horses, they don’t tend to look back too much.”

Surprisingly, Katy told me her ride today on Poof was not one of her best at all, “There were some moments that made me nervous. I had changed to a bigger stud behind before I went and I actually felt it was too much, and I changed back to the smaller studs on ‘Wart’, my second horse. Poof just felt stuck to the ground in some places, and he’s very willing and honest so he jumped in places where he got in kind of deep and lost his oomph but he tried his heart out. I don’t feel that it was me or anything mental, I think he just didn’t have a good feel in his feet. It really rattled me and I almost pulled him up because he’s usually so forward and quick off the ground, but by the time we’d jumped fence 7 he’d got a feel of the ground better. There’s a lot to think about when you go out and he hasn’t run on grass since he was here in 2010 so he’s also not a horse who is really familiar on this type of terrain, and being from California we don’t even know what studs are!”

Katy has been working on the final phase and is also hopeful that it will pay off on Sunday,  “These last seven months with Hawley I’ve been really working on my show-jump riding in particular, and we’ve come a long way from where we were last year. It’s always the most mentally challenging phase for me but we’ve come a long, long way in our schooling at home so I’m hoping to put it to work tomorrow. Both horses are quite capable of a clean round, it’s just the rider!”

How do our top 2 gals plan on celebrating tonight? “Oh, you know – icing, braiding, walking! Then going to sleep. Maybe take a shower!”

Enjoy the moment! Thank you to Katy and Emilee for chatting to us, and congratulations again to them, and to Hawley Bennet Eventing. Now I may or may not be about to go and watch Ian Stark give Gin’N’Juice a little pop! Keep your eyes on EN, thanks as always for visiting, and Go Eventing at Rebecca Farm!