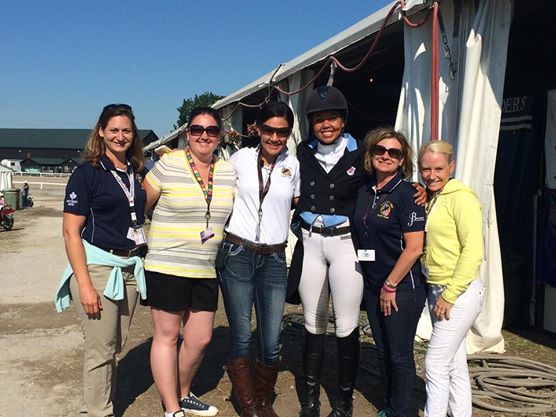 Kaylawna Smith had a great lead up to the NAJYRC, notching a win in the CIC* at Copper Meadows in June as her final prep for Kentucky. After being named to the USEA Area VI squad with London Calling OHF, Kaylawna set about solidifying her dressage and entered Rolex stadium full of confidence this morning. Perhaps that rain dance worked, Tamie?

“He felt really good in warmup,” Kaylawna said. “Walking through the Rolex tunnel to the ring – it was an unbelievable experience. He went in there and was forward and consistent and did everything I asked of him. He’s just been getting better and better.”

Kaylawna and London Calling OHF laid down a 45.6 as one of the earlier pairs to go, and their lead was never touched as the remaining riders put in their tests, although Area V’s Alyssa Phillips and Bliss III gave them a run for their money, sliding into second after earning a 47.1. Ontario’s Moira de Ste Croix-Laframboise and Blue Ben round out the top three, scoring a 49.2. 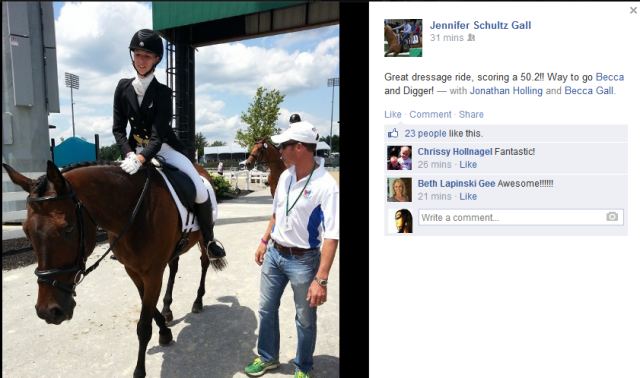 In all, five riders cracked into the 40s, including Patience O’Neal and Markus and Alexis Nelson and Total Eclipse, who are tied for fourth going into cross country. It was a hefty division competing in the CH-J*, with 44 riders entering at A today.

Now, the CH-J* Young Riders will turn their attention to the cross country course, which is definitely showing its size. “The course looks like there’s some challenges, but I’m really excited,” Kaylawna said. “It’s long and it’s big, but I think we’re going to be good. I just have to keep my nerves in check and stay focused.”

In the team competition, it was Area IV that came out on top at the end of day one. Team members Kristine Burgess/BFF Tiara, Elena Hengel/Zipp, Hannah Stohr/Hey Jude, Rebecca Gall/Can Ya Dig It earned a cumulative penalty score of 153.7 to go into the lead over Area V, which scored a 159.6.

Area IV coach Jon Holling was on Facebook today and was thrilled with his squad’s performance.

The CH-Y** will kick off dressage next, and we’ll be back later with a recap on how the day went for those riders. In the meantime, here are the team standings after dressage for the CH-J*: