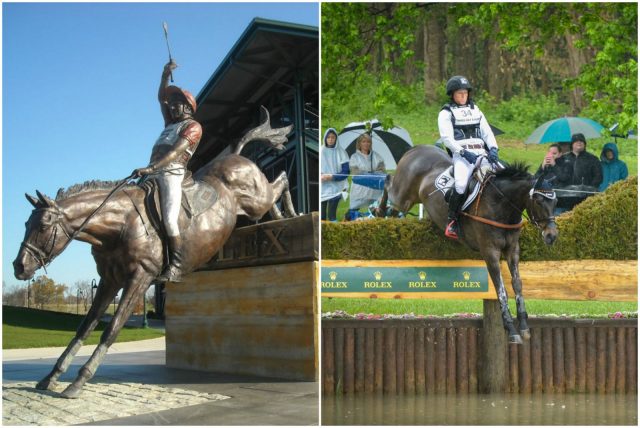 You’ve got company, Bruce Davidson! Kentucky Horse Park officials have confirmed that plans are underway to unveil a life-sized bronze statue of Michael Jung at the 2017 Rolex Kentucky Three-Day Event.

The statue, to be positioned atop an island in the Head of the Lake, is a tribute to the German eventing icon and fischerRocana FST, with whom he won Rolex in 2015 and 2016. The pair returns this month to defend their title.

Caroline H. Boone, KHP Foundation Chairman of the Board, explained, “We wanted to do something special for the living eventing legend, but what? It’s not like he needs another watch.”

The statue looks very similar to Bruce’s statue located outside Rolex Stadium but with some modern updates. Interactive fountains strategically placed at fischerRocana’s feet create the illusion of a dramatic splash into water, and a Vegas-style laser light show synced to German techno music will keep crowds entertained in between horses coming through the Head of the Lake at this year’s event.

To fund the project, the KHP Foundation salvaged used bedding from fischerRocana’s stall at Rolex 2016 and sold it via silent auction. The winning bidder was the U.S. Eventing Team, in hopes that extensive lab testing on the manure would illuminate clues to Michael’s success.

The auction also featured a used coffee cup discarded by Jung in a waste bin at the Kentucky Horse Park, and a Rolex Steel and Gold Oyster Perpetual Watch he accidentally left behind last year in his haste to get to Badminton, which he also won.

Michael told EN he looks forward to winning this year’s event and is honored by the commemorative statue: “It gives me a good feeling.”