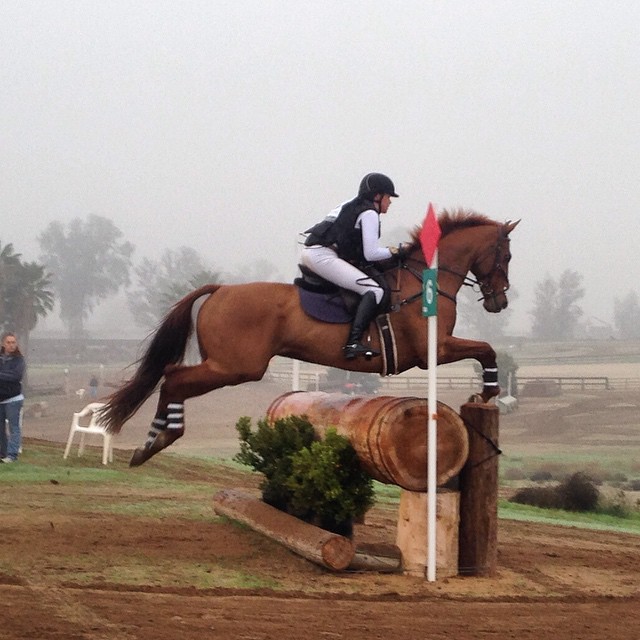 Katelyn Gurbich and Kaptain Jak competing in the Preliminary Rider division at FCHP. Photo via Lauren Billys on Facebook.

It’s about that time of year when we’re all wishing we were on the West coast or in Florida (or somewhere else warm), and we’ve been looking at all of the West coast eventers’ social media pages longingly as we freeze our toes off in the Polar Vortex.

Fresno County Horse Park ran Intro through Preliminary divisions, and Lauren Billys aboard Ballingowan Ginger were the winners of the Open Preliminary division. The pair scored a 23.0 in the dressage and went on to finish on that score to finished ahead of David Robel and High Light in second place.

Bea di Grazia and Ringwood Isabelle finished their weekend in third place on a score of 36.5. This is the Irish Sport Horse mare’s first run at Preliminary after running primarily at Training this year.

Ocala Horse Properties kicked off their winter series this weekend, and Leslie Law with Unborn de Lelo took home the win in the Open Preliminary A division, finishing on their dressage score of 22.7. This Anglo-Arab gelding owned by Beatrice Ray-Herme is nearing the end of a full year competing at Preliminary, as Leslie usually likes to give his young horses plenty of time at the level before eyeing a move up.

Kyle Carter and Sayyida were good for second place on a score of 23.2, followed by Michael Pollard and Tsetserleg on a 29.2.

In the B division of the Open Preliminary, Shanon Baker and Lansdowne lead wire to wire to finish on their dressage score of 26.8, a comfortable lead over second-placed Daisy Trayford and Exmoor Denver on a 35.1. Shanon and Lansdowne are coming off of some disappointing results in two CCI* attempts and will likely feel a big boost of confidence from a solid outing this weekend.

Jamie Alnwick and Factor Five bring up third place with a score of 59.7.

Cathryn Green and Coin Toss III took home the win in the Open Intermediate at River Glen in Tennessee, which was sure to be a bit on the chilly side this weekend. Cathryn had 15.2 time on cross country but was still able to move up from second place to finish on a score of 55.0. This is the pair’s first Intermediate win.

Selena Pope and Vanity finished their weekend in second place on a score of 60.9. Selena and Vanity have been very successful at this level, not finishing out of the top five in eight completions.

Rebecca Gall and Can Ya Dig it were the third place finishers with a final score of 64.4. This was this pair’s second start since moving up to Intermediate at Otter Creek in September.