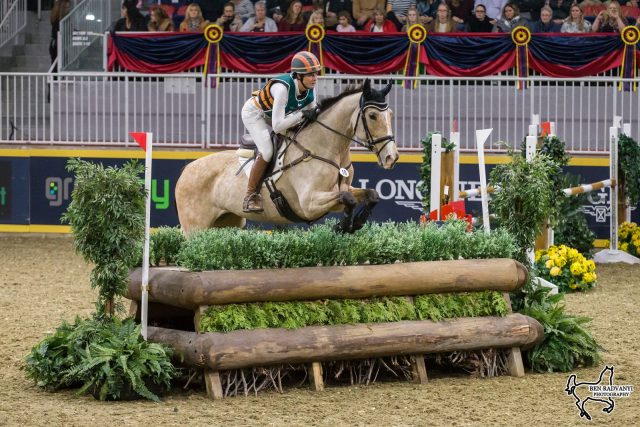 Lauren Kieffer surpassed a stable of other Olympians and distinguished riders to capture the win on the final night of the $20,000 Horseware Indoor Eventing Challenge at Canada’s Royal Winter Fair and Horse Show. Kieffer, who says she was very honoured to be invited to compete in Toronto at this prestigious event, gives all credit to her mount, Glendening Avis, loaned to her for the occasion by Callie Evans. Callie is a Canadian rider who has trained the 13-year-old  buckskin mare to the three-star level.
“She is a sweet mare” said Kieffer after their stellar performance in the ring. “I was just saying, ‘ Please like me.’” She rode the Canadian Sport Horse for the first time at 5:00 a.m. the previous morning in a ring with about 40 other horses and only had  about 5 jumps with her to get acquainted.
Captain Mark Phillips, the designer for this Indoor Eventing Challenge, made Saturday’s course even more difficult for the finale than it had been the previous evening.
“Any time you got a course with double skinnies and double corners even if you are running around a 10 minute course you think its difficult then let alone doing that many fences in 80 seconds is even more challenging,” stated Kieffer. “If you are not thinking about the third fence by the time you are jumping the first fence then you’re late. Mark was super clever in his design everywhere. He set an out for the horses so if you made a mistake at the solid cross-country fences they just ran out and you get to slap yourself in the face and carry on.” 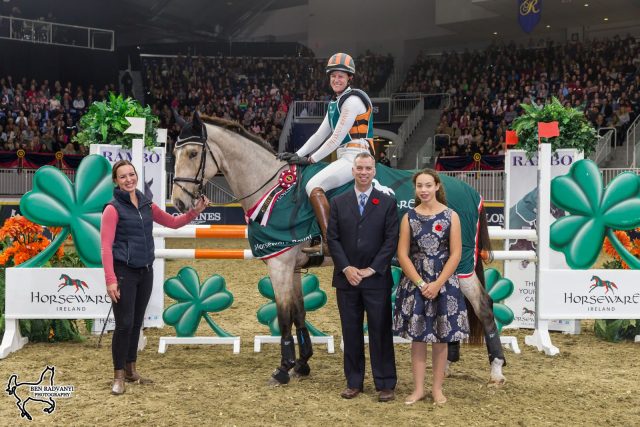 The spoiler fence of the first night of the Horseware Indoor Eventing Challenge was the very last fence: a wide show jumping oxer that saw many riders have a rail here to spoil an otherwise clean ride. The final night’s very first fence, a wide show jumping oxer, very close to and at a ninety degree turn from the start box, proved to be another source of frustration for the riders many of whom had that fence down at the very start of their run.
Selena O’Hanlon, first to challenge the course and a crowd favourite, blazed out of the in gate at a dead gallop on Unique, a mare borrowed from Sondra Blair-Bevridge for the occasion.  O’Hanlon, going for speed on the course, was unable to persuade her new acquaintance to jump all the jumps.  Although O’Hanlon was unable to obtain redemption for the previous night’s ride, she left the ring with a huge smile on her face giving Unique hearty pats on the neck showing what a good sport and a great horsewoman she is.
Manny, Diana Burnett’s  bay gelding, expertly ridden by Burnett, was really amped up  by the cheering crowd but was on a clear round until the last fence where he had an unfortunate  rail.
Next in the ring, Lindsay Beer riding El Paso, had the very first rail down. Beer’s strategy was to ride the rest of the course at a more moderate speed but taking really tight corners in order to keep the rest of the round  successfully clean.
Candy King,  Holly Jacks Smither’s sweet bay mare and Karl Slezak riding the impressive Irish Sport Horse Fernhill Choco Royale put in great efforts but were not rewarded by clean performances over this very tricky and demanding course.
Colleen Loach and Serendipity had the first rail down but since nobody had gone clean up to this point in the evening,  Loach ‘threw down the gloves’ and sped around the rest of the course taking the corners “in a stylish manner” as the Irish accented announcer commented.  The crowd roared as the bay thoroughbred mare cleared the last fence in blazing time to take the lead after 5 riders.  It is Loach’s third time at the Royal and she thinks that events such as the Horseware Indoor Eventing Challenge, “display the sport to a lot of people in a shortened version but they can get the idea a little whereas a lot of these people wouldn’t necessarily go out to a cross-country course or event.”
“The atmosphere in the arena is great” Loach says.  The whole event provides the riders with an adrenaline rush.
Up next was Lisa Marie Fergusson, a former Pony Clubber in British Columbia when growing up, riding Honor Me, a chestnut Welsh Sport Horse, described by Fergusson as her ideal horse for Indoor Eventing.  “Pretty brave. Not bothered by distractions on the course. A horse that focuses on the jumps,” she described.  Clear over that first bugaboo fence at one, the pair were off to a good start.  They took the offset corners at an angle and, with little room to spare, the horse powered up and off the bank but  jumped from a long spot at the final fence on the course and took down a rail. 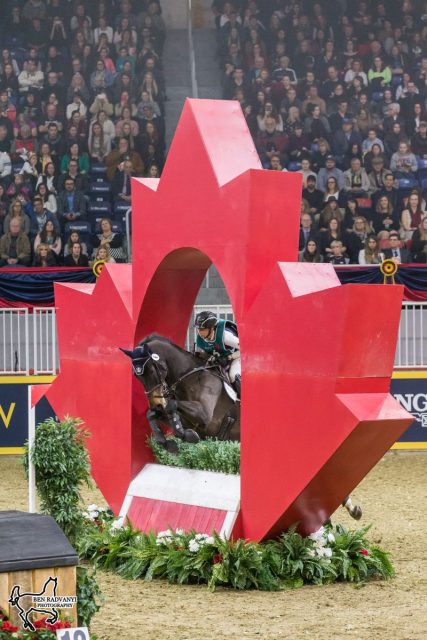 Kendal Lehari and her own bay thoroughbred gelding, Totally Frank, were next to go.  As only one of three clears on the previous night, they were set to put the pressure on the next two riders. Lehari  skillfully steered her big fellow around the course putting in a great jump up the bank at a slight angle and leaving all the poles in the cups and jumping through all the flags to go clear again.
Brandon McMechan, a full-time chiropractor as well as a competitive rider at the three-star level, was second last to go on his big bay Thoroughbred gelding Oscar’s Wild. “ I just love this horse,”  said McMechan. “He can be a little cheeky on the ground, but I can’t say enough good things about him. Part of the reason we do so well is because he’ll just do anything I ask of him and he’ll do it with his whole heart. If I really mess up he’ll let me know and if he stops its for a very good reason and he probably saved us both.” 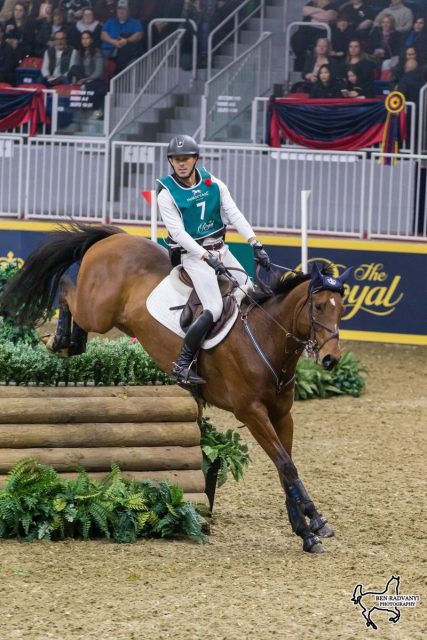 McMechan and Oscar demonstrated their partnership to great effect on the big, challenging course. Starting off at a more moderate rate of speed, the pair sped up over the latter part of the course to finish as the fastest clear round to that point. Discussing his strategy McMechan stated: “ I want to make sure he has a very positive experience. I’m not going to gun him at anything. I’m just going to take my time and make sure he’s happy.”
Glendening Avis and Lauren Kieffer, the final partnership on the course cantered into the ring knowing that in order to win they have to leave everything up and they have to be very quick. This mare and her rider put in a perfect fast round shaving more than a second off McMechan’s time to win the title.
Speaking later Kieffer said: “Brandon and Kendal certainly put the pressure on us.  But the mare tries her guts out. With so little warm up it’s hard to figure out where you are as a pair. I felt so in sync with her.” Kieffer joking told Callie Evans, the mare’s owner, that she might be trying to stuff the mare into a suitcase to take her home to The Plains, Virginia.
All the riders were asked if they thought that Indoor Eventing is a good showcase for the sport of Eventing.  All agreed that it is very different from what Eventers do on a regular basis, but that it is a good way to promote the sport.  “It’s fun. It’s energetic. If you get even 1 person to go eventing and get into it then its done its job,” said Kieffer.
Everybody also agreed that the fans are great, very supportive and knowledgeable.  Indoor Eventing gives people a chance to see just how skilled and careful Eventers really are. The revamped scoring system rewards careful riding not just speed.  The horses look like they are having fun along with the riders. Good horsemanship was demonstrated by everyone invited to ride.
McMechan summed it up best. When asked if Indoor Eventing is a good way to promote the sport he replied: “I do. Just look at the stands. I think with the atmosphere and exposure and the other riders are all so amazing so I think its really good for the sport.”