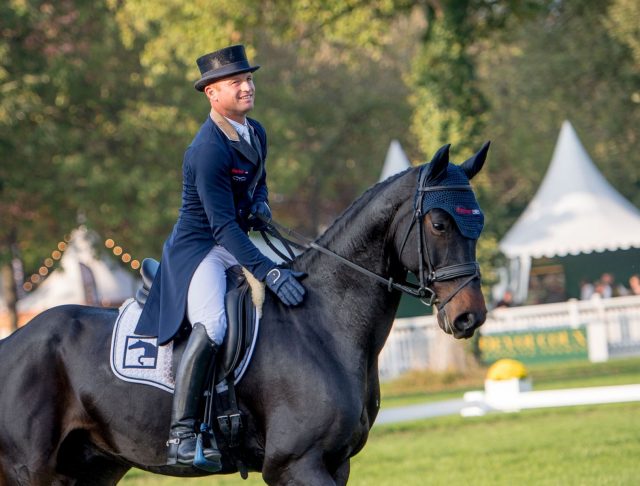 Welcome to episode two of (Equine) Toddlers and Tiaras, the smash hit show in which the eventing world’s most precociously talented youngsters endure long hours with the Glam Squad, some serious dance routines, and snack-based bribery on their quest to become the Ultimate Supreme Best Prancing Toddler. Or something like that, anyway.

Need an episode one recap? When we last saw you, we were halfway through the dressage, and found ourselves in a very fortuitous position indeed — US representative Liz Halliday-Sharp lead the six-year-old class with Cooley Moonshine on a remarkable score of 22.4, while Ingrid Klimke and Asha P held the seven-year-old lead on 25.3. With some seriously exciting entrants in the ring today, we were left on one heck of a cliffhanger.

Nah, who are we kidding? Nobody was ever going to usurp Liz and Billy, who stay firmly atop the six-year-old leaderboard as we look ahead to tomorrow’s cross country. We had a little look at their test sheet, and were delighted to spot that they also earned themselves a coveted 10 for their, um, cession á la jambe gauche, which sounds delicious. 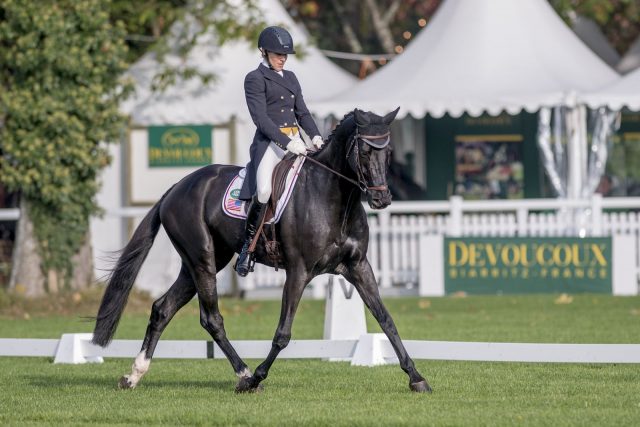 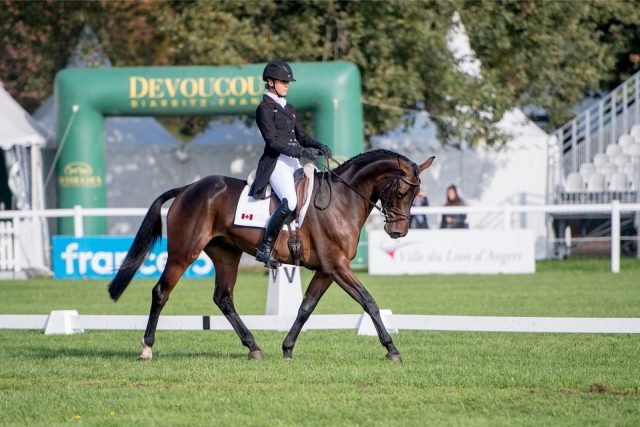 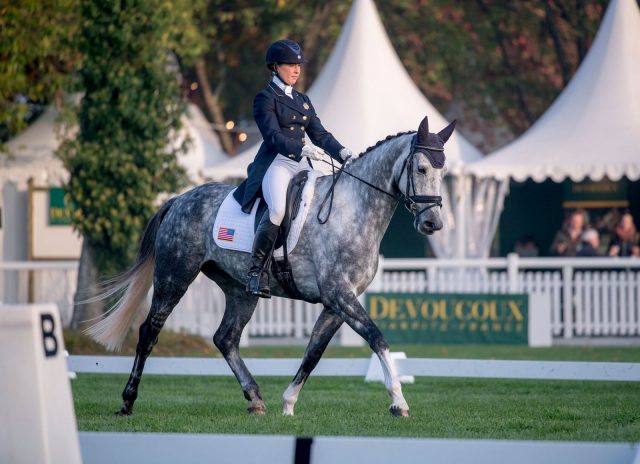 Tiana Coudray and Happenstance (Quality Time x unknown by Germus R) also performed this morning, delivering a 35.6 to sit 34th at this early stage. The first combination to represent Mexico at Le Lion also made their way into the main arena – Pedro Gutierrez and California Mail (Quite Easy x Varnalisa Mail, by Kalaska de Semilly) scored 39.4 and hold 39th place. 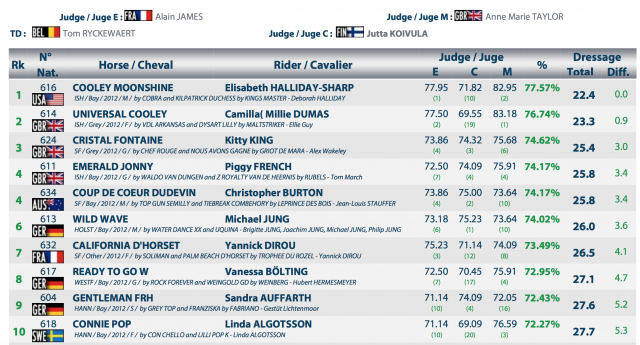 The top ten in the six-year-olds’ championship after dressage.

The new leader of the seven-year-old class shunted yesterday’s leaders Ingrid Klimke and Asha P into second by just 0.3 of a penalty, and really, it was always going to happen, wasn’t it? After all, new leader  — and last in the ring — Choclat (Contendro I x Etienne, by Espri), ridden by Michael Jung, gave us one of the lowest-ever finishing scores in an international event last season, when he won Strzegom’s CCI1* on a final score of 15.2.

Every time I have to type that I die a little inside, so have this restorative GIF and let’s keep one another close, my fellow 30s-scoring peasantfolk.

He’s never quite reached those dizzying heights since, though he hasn’t really had to in order to be a very reliable first-phase performer and, nearly ten points over that Strzegom score with today’s 25, he proved that. (Though, we hasten to add, he didn’t get any 10s, with jambe or otherwise.) The secret? Total consistency through the test, which is just what got Michael’s recently retired legend La Biosthetique Sam FBW his great scores throughout the years, too. Interestingly, none of the three judges — Gerd Kuest, Eric Lieby, and Robert Stevenson — had the talented Hanoverian in first place. Instead, Gerd Kuest scored Ingrid and Asha P the highest, Eric Lieby’s pick was Nicola Wilson‘s JL Dublin, in third, and Robert Stevenson favoured Jesse Campbell and the Jonty Evans-produced Gambesie, who lie 6th on 27.6.

Last year’s six-year-old World Champion Monkeying Around (Bertoli W x Donnee, by Donnerhall) has all the right breeding to excel in this phase, and he didn’t disappoint today. He scored a 26.1 with rider Izzy Taylor, moving him into equal fourth place overnight to tie with Laura Collett and Calmaro. 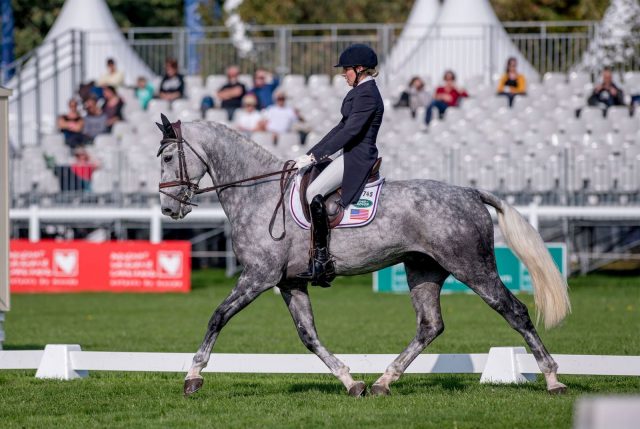 Liz Halliday-Sharp returned to the arena today, this time riding Cooley Quicksilver (Womanizer x Kylemore Crystal, by Creggan Diamond), with whom she completed last year’s six-year-old championship. The rangy, extravagant-moving gelding didn’t quite live up to the standards set by his stablemate the day prior, but posted a nevertheless respectable score of 31.1, which sees them occupy 24th place ahead of tomorrow’s cross country. 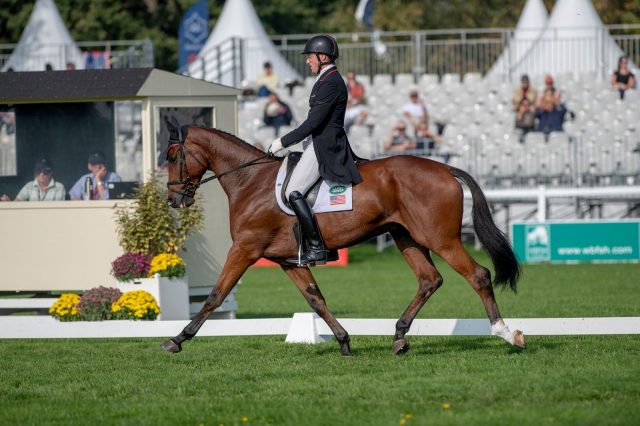 Doug Payne and Quantum Leap make strides on their quest to improve the young horse’s education. Photo by EquusPix. 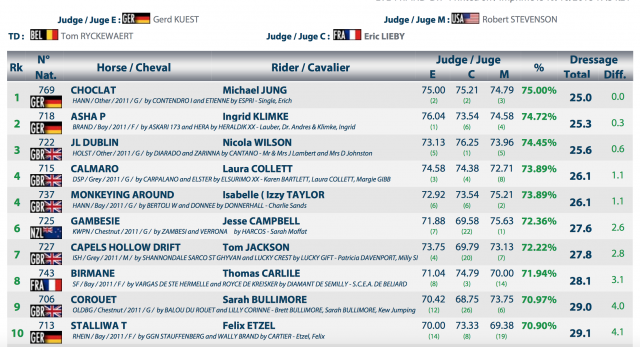 The top ten seven-year-olds after dressage.

The action-packed cross country phase kicks off tomorrow morning at 10.00am local time/4.00am EST, with the six-year-old CCI1* first and the seven-year-old CCI2* commenced at 12.45pm local time/6.45am EST. You’ll be able to watch all of the action unfold via the free livestream.

Le Lion’s cross country is always breathtaking viewing, not just because of the sheer quality of the young horses in the classes — above and beyond that, it’s one of the most stunningly built courses the sport has to offer, with jumps including an enormous violin in the woods, dragons, giant snails, a sprawling chessboard, and so, so much more, all nestled within the glorious grounds of a quintessentially French manor house. To get a sneak of what’s to come, check out this teaser video:

French eventing fans are some of the best in the world, too — despite the fact that the competition is ‘only’ a CCI1* and CCI2*, they flock to every available inch of roping around the course, absolutely breathless with delight to be able to enjoy a day of world-class equestrianism in the autumn sunshine. That’s one of the most educational parts of the whole competition — can these talented youngsters cope with the unflinching adoration and celebratory whoops of a buzzing, vibrant crowd?

Our North American contingent (and CCI2* leader Michael Jung) will ride at the following times:

Crack on, small but talented ones.

We’ll be back in action tomorrow with all the news from cross-country day — in the meantime, Go Eventing! (And go pageant babies, we guess.) 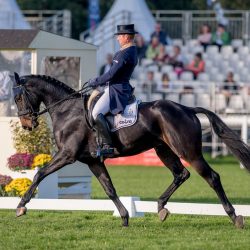 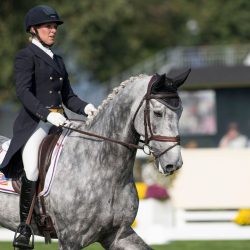 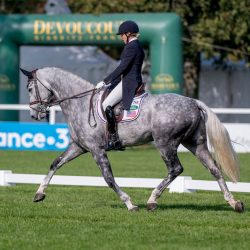 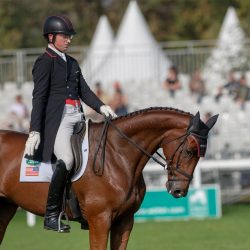 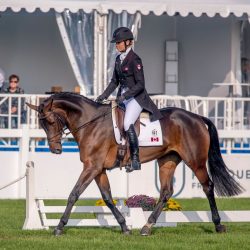 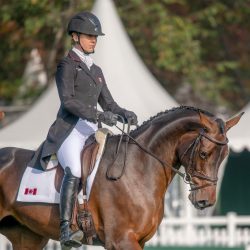 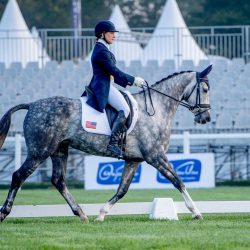 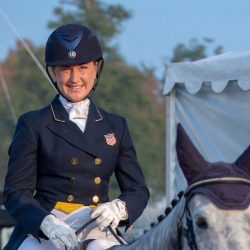