There’s been a significant shuffle to the CCI4*-L leaderboard at the end of cross country day at the Dutta Corp Fair Hill International Three-Day. After much ado about flag penalties, a whole new top three emerged with Canada’s Waylon Roberts and Lancaster in the lead on their dressage score of 31.1. 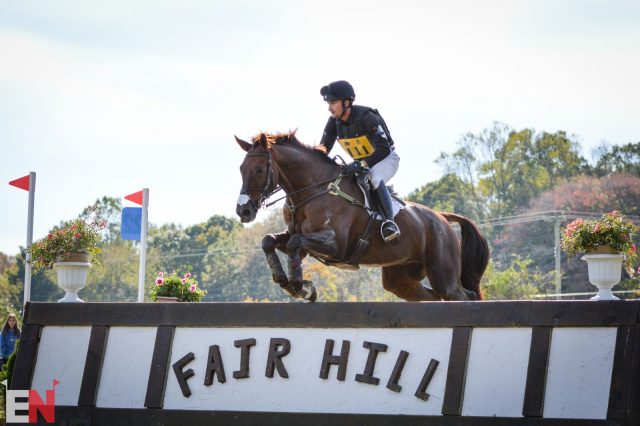 The Canadian rider and the 12-year-old Canadian Sport Horse gelding owned by Michelle and John Koppin have been chipping away at the Advanced level, taking it one phase at a time and trying, as one does, to put all the pieces together. They made their five-star debut this spring at the Land Rover Kentucky Three-Day Event and then returned to the Kentucky Horse Park again for the American Eventing Championships this summer.

“Kentucky was a thrill,” Waylon said. “For me I am still feeling pretty green at that level, and it was very beneficial for him as an experience, but we definitely have a lot more to prove at that level.”

“Lancaster’s first Advanced run after Kentucky was at the AEC and I had some trouble at a couple of corners,” he recalled. “Derek [di Grazia, course designer] again set that AEC track to mimic what he set at Kentucky for the five-star, so it was eye-opening for me because I realized I had gotten away with a few things [at Kentucky] so I went home the last month or so and really tried to buckle down on the corners and getting him to follow me through the turns. Even though AEC didn’t go the way I wanted, it was probably the best thing that could have happened for me in preparation for this event.”

“At all the corner combinations he asked you to be patient and forward out on a line, which, for event riders, is really difficult because it is much easier to just go fast and straight.”

As one of the last 10 riders in the order of go today, Waylon was able to capitalize on his late draw in the order by seeing how other riders fared tackling the course’s difficult questions.

“I was fortunate enough to be late enough in the four-star so I was able to watch a lot and see how the course was riding and it definitely proved to be a tough track that Derek [di Grazia] set. The ground was fantastic, but that coffin was really tricky for a lot of horses, and I definitely got a lot of information from watching, so I am thankful for the late draw.” 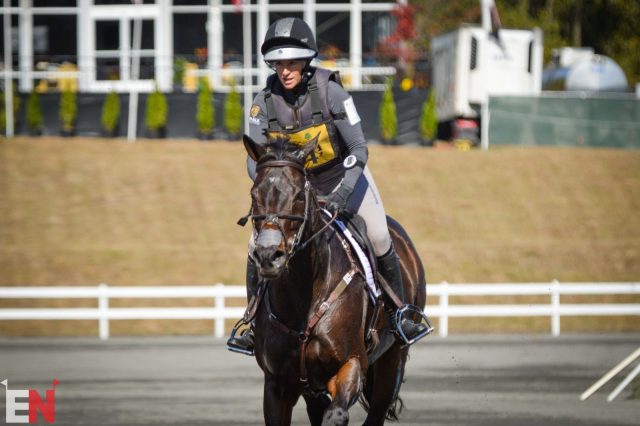 Erin Sylvester and Paddy the Caddy. Photo by Abby Powell.

Since overall first-placed Waylon rides for Canada, that means Erin Sylvester is sitting in pole position to clinch the USEF CCI4*-L Eventing National Championship as the highest placed American rider. Erin moved up into second place overall with her and Frank McEntee’s 12-year old Thoroughbred gelding Paddy the Caddy, with whom she placed in the top 20 at Kentucky this spring.

“The course rode well, but definitely difficult in some spots,” said Erin. “Paddy jumped well the whole way around and I couldn’t be happier with his effort.”

Despite losing a shoe between fences 18 and 19, the pair jumped clear and crossed the finish flags just one second over optimum time to add 0.4 penalties to their dressage score, putting them on a 34.3 headed into tomorrow. 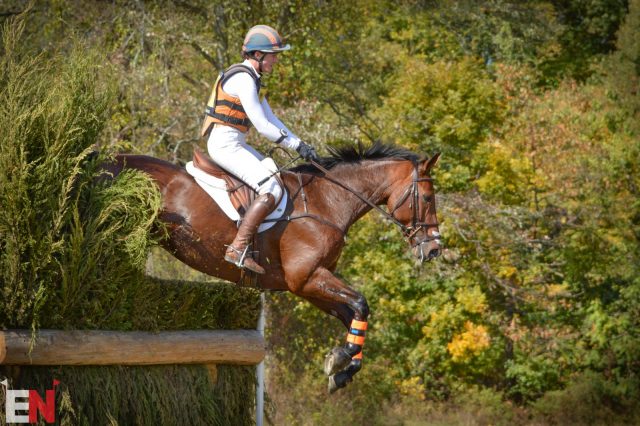 Lauren Kieffer jumped clear with time on D.A. Duras, who is owned in partnership with Jaqueline Mars and Debbie Adams. They moved up from 13th after dressage to now sit in third on a score of 36.6.

Though no one wants to move up in the standings due to the misfortune of others, as Lauren pointed out, she was particularly pleased with today’s result for the 11-year-old KWPN gelding who has been plagued by a bit of bad luck in the past.

“The horse was great today, he made it feel easy,” she said. “We’ve kind of been cursed by quite a bit of bad luck over the years … but he’s a really nice horse all around.”

Lauren also praises the course as a true test worthy of championship competition and comparable in difficulty to many found overseas.

“The course was great. The nice thing is that Derek doesn’t soften the course for any reason,” said Lauren. “I’ve been fortunate enough to do a lot of four-stars around the world and I put Fair Hill in the top three in its difficulty.” 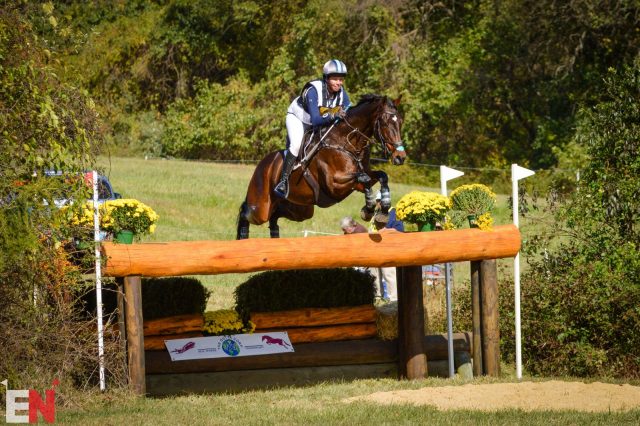 A couple of big-movers shot up in the standings after they delivered clear and fast rounds across the country. Mia Farley and BGS Firecracker, previously in 22nd after dressage, are now in 4th place after a double clear round and are headed into Sunday on a score of 38.3. Meghan O’Donoghue and Palm Crescent also clocked in a double clear to move up from 23rd to 5th with a score of 38.6, as did Jenny Caras and Fernhill Fortitude who might be the biggest movers of the day landing in 6th from 26th who hang on to their dressage score of 40.0.  Sydney Elliot and QC Diamantaire added just a couple time penalties to set in 7th on a score of 40.2. 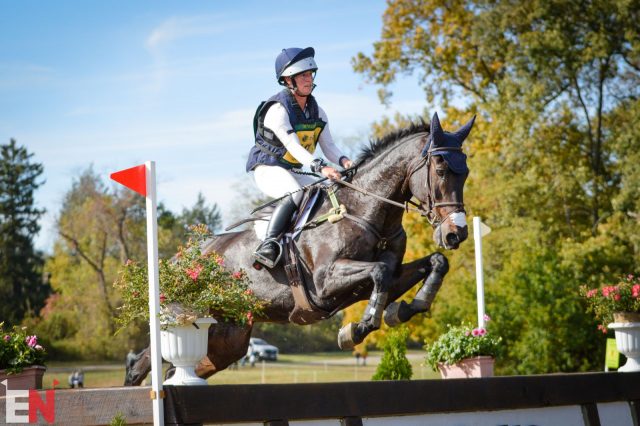 Overnight leaders Mara DePuy and Congo Brazaville C were looking on point through the majority of the course, but ran into a spot of trouble at the Farm House Corners, Fence 21AB, where a large jump into the combination led to a unclear path to the alternate fence, costing them 20 penalties.

Mara then came to additional grief when Congo drifted to the right coming over a wooden duck which served as the B element of Fence 24, the Springhouse Water, knocking Mara’s leg against the duck’s head  and unseating her.

Phillip Dutton, who sat in second place after dressage with Z, had ridden an otherwise double clear round but was assessed 15 penalties for taking out the flag at the B element of the Farm House Corners. Despite those penalties, Z remains in the top 10 overnight, now on a score of 44.4. His stablemate, Fernhill Singapore, sits in ahead of him in 8th place on a score of 42.8. Three other horse and rider pairs were also penalized for knocking the flag at the same complex: Doug Payne and Vandiver, Will Coleman and Dondante, and Mike Pendleton and Steady Eddie. All of those pairs would have otherwise slotted into the top ten.

Rounding out the top 10 is Allison Springer and Business Ben, who added only time to their dressage score, though enough to drop them from 5th to 10th on 46.9. 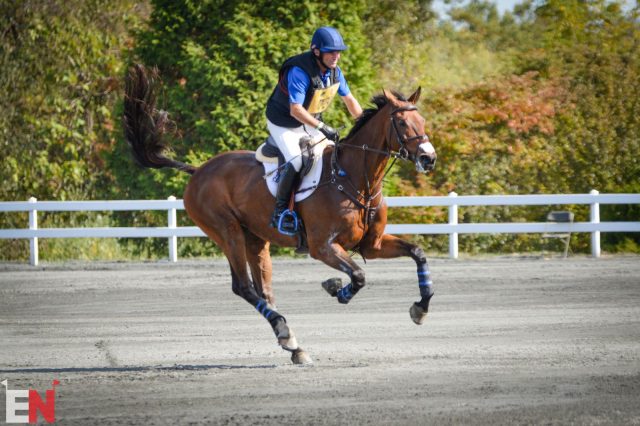 The Farm House Corners were the second most troublesome spot on course, bested only by the coffin complex at Fence 13, The Walls, where 5 run-outs  and two rider falls all occurred at the C brush element. One of the pairs sadly falling victim to this spot on course was Colleen Rutledge and Covert Rights as they were amongst the pairs who picked up 20 penalties here.

In total, there were seven rider falls in the division and no horse falls. No injuries — neither horse nor human — have been reported.

Waylon will not have a rail in hand over Erin heading into show jumping tomorrow, and fewer than two rails separate the top five spots. They’ll have to pass the second horse inspection first, however, which takes place at 8 a.m. It’s shaping up to be an exciting finish here at Fair Hill, so stay tuned for our continued coverage. 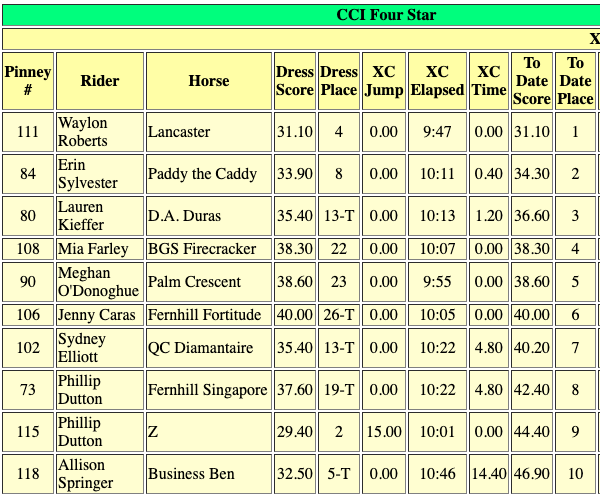