“We’re average, but at least we’re consistently average.” In this week’s Lessons Learned, Ainsley Jacobs discusses feeling average as she continues to compete on JJ in eventing. 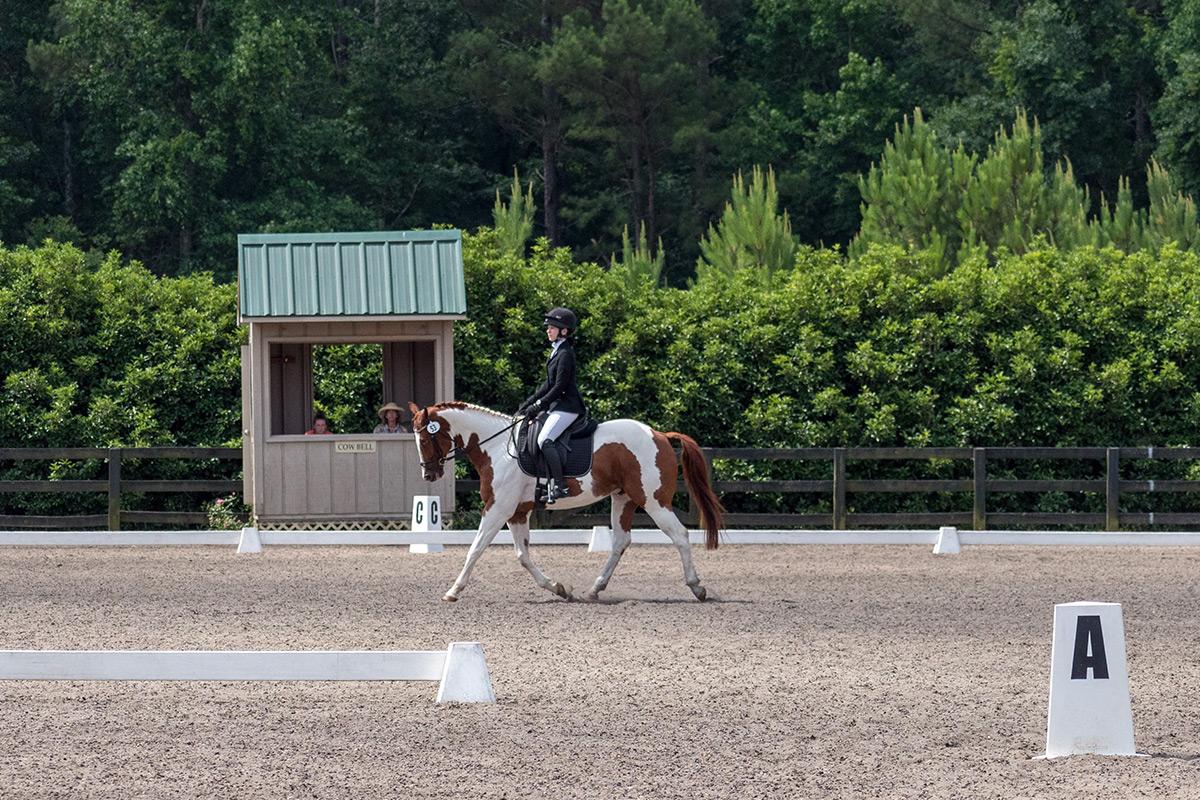 I just got home from the USEA Area III Championships at Poplar Place Farm and it was definitely a weekend of ups and downs. Metaphorically, that is. I didn’t actually fall off this time. 😉

A month ago, I went to Poplar to run the May Horse Trials at Novice to “prep” for this event and had a really disheartening finish. I was hoping for redemption this time out, but it was – unfortunately – a bit of the same.

I hauled in on Thursday, had a quick flat school in the evening with coach Lauren Turner of River Birch Farm and went to bed feeling optimistic.

Friday’s dressage ride time was scheduled for 11:22am, and I was grateful because it had been brutally hot all week and I was roasting. We kept warm-up short, which JJ seems to prefer, and I trotted on in to knock out our Novice Test B. 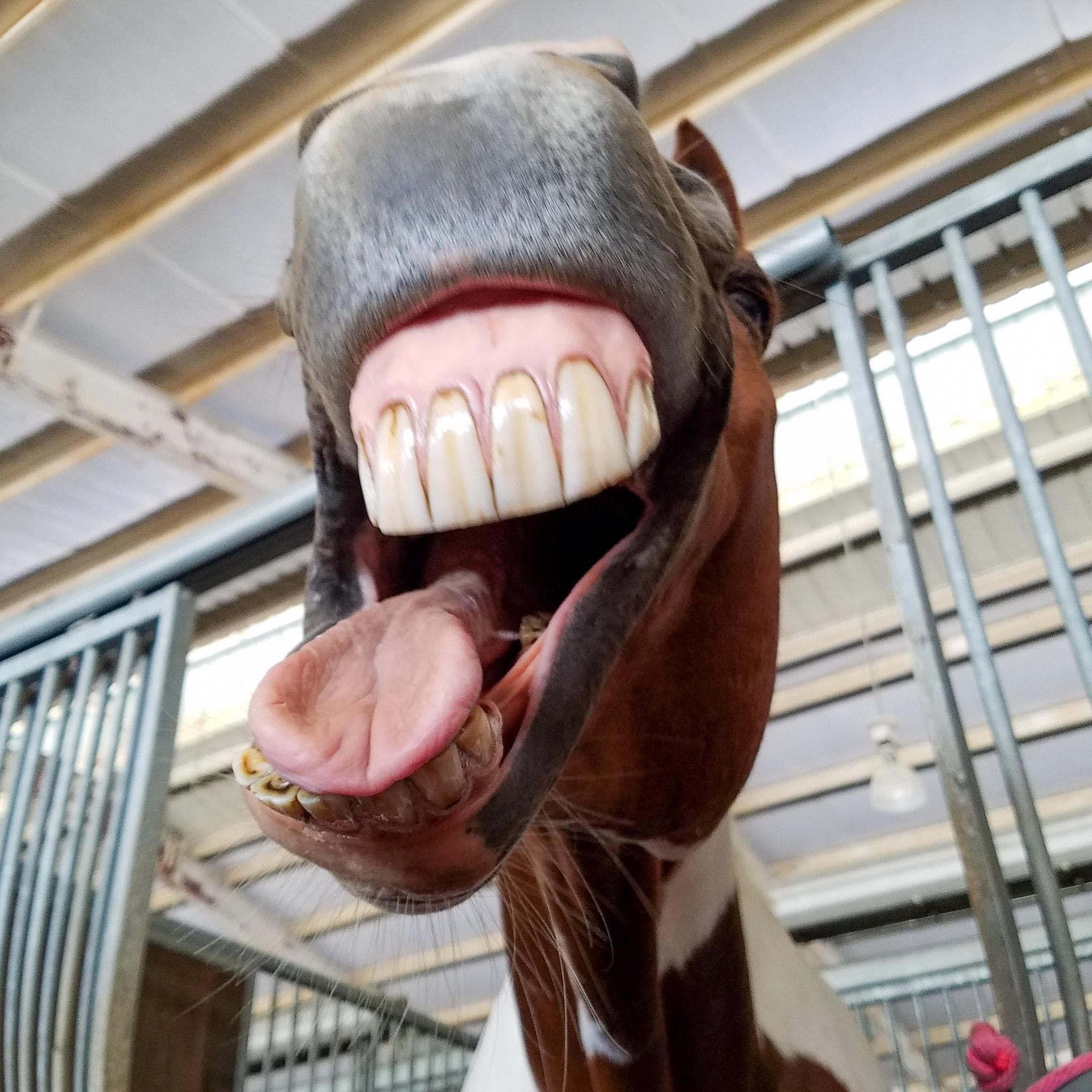 JJ was pretty relaxed, too, and spent a lot of time doing this. 🙂 Photo by Ainsley Jacobs.

I’m happy to report that the test felt nice. Not fabulous, not awful, just nice. He said “okay, sure” to everything, didn’t fuss, fight or toss his head at all (which is a huge improvement for us), and only tried to show off his signature “trot when we should be walking” move once. I was pleased overall and thought it would be an improvement from our usual mid-30s score.

That evening, Poplar’s owner Launa Des Portes treated us to free pizza and beer, which I thoroughly appreciated, then Team River Birch had a relaxing cookout (yay second dinner!) at the camper. After, I headed back to my hotel to shower and get appropriately nervous about cross country.

After JJ stopped at the down bank at our last event, and an epic trail riding accident last weekend (long story short: we were out with friends, tried to cross the Etowah river and one horse literally cannonballed in, practically landing on top of JJ, who bolted and wound up withers-deep in the water and had to swim upstream against the current to get us out. I was SO glad I had my Western saddle to hang on to, but the other rider wasn’t as lucky and wound up with a badly broken leg. The horses, miraculously, were fine.) I wasn’t sure if JJ would even go into the water… and we had two water crossings to navigate on our course.

I told myself not to dwell on the past, and hope that JJ wouldn’t either, and chose to give him the best, most confident ride that I could. We headed out of the start box, tackled the first beefy jump on our course, and immediately had a disagreement about which way to go.

It seems JJ remembers Poplar’s old course, which had been the same for years, so when I asked him to turn left through the woods, he told me I was an idiot. I finally convinced him to do a NASCAR impression, we turned left, popped the second jump and then… more discussions about navigation. So, we basically serpentine-d into jump three, and had to have a brief pause to “reset the GPS” and remind him who was in charge of steering. Hint: not him.

Jumps 4A-B were an up bank out of the water and a fence a few strides after. I felt him lighten in the bridle for a split second as he hesitated going in, but I closed my leg and told him it was safe, and he listened. I felt his confidence kick back in a stride or two into the water, and it was smooth sailing (pun intended) after that.

Every other jump, including the small corner, was great. He was bold over the ditch through the coffin and actually let me steer for the rest of the course. Unfortunately, the “conversations” early on cost us, even though we galloped quite a bit, and we were a few seconds over optimum time… so 4.40 penalties got tacked on to our dressage score on an otherwise clear (and totally awesome, easy peasy) XC run.

With “the hard parts” and my fears about JJ’s lingering water issues out of the way, it was time to focus on enjoying the competitor party – and stadium jumping. The course was really twisty, but somewhat similar to what we had run last time… the same stone wall that JJ stopped at last time, too, was also on course as jump #1. It was “do or die” time.

Sunday rolled and I had a feeling we were well out of the ribbons due to dressage and the cross country time, so I just wanted to get stadium over with. After a less-than-ideal warm up, we headed over to watch a few rounds go before it was our turn. The course was tough and people were taking rails left and right. JJ felt ready, though, and I wanted to go out on a high note. 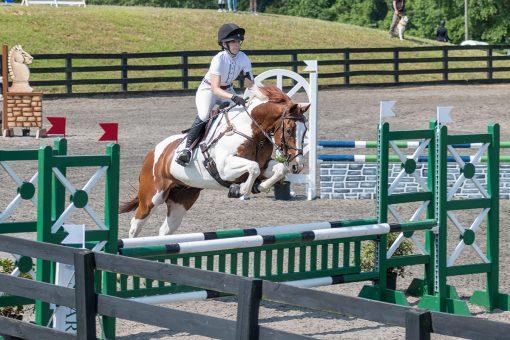 JJ had opinions that the fences should be bigger. Photo by Eric Nalbone.

Coming in to the first jump, JJ got two light crop smacks on the shoulder to remind him not to think about ducking out – and he didn’t! He was totally perfect over the scary stone wall, effortlessly cruised around the rest of the course and didn’t take down a single rail. We had done it – we finished out the event strong with a double clear round.

…Unfortunately, it wasn’t enough to move us up to a ribbon placing. Ultimately, we finished 11th overall as we had scored a dismal 34.60 in dressage. There were 16 in my Senior Novice Rider Championship division, and only five in the Novice Horse Championship class… looking back, I sure wish I had registered for that instead. Because maybe then we would be going to the AECs. 🙁

Regardless, I was so proud of JJ and so pleased with his performances all weekend! He really was wonderful, and I’m always happy to finish with him safe and sound. He doesn’t know he didn’t win… and as far as I’m concerned, he’s the best horse out there.

On my side, though, the honest truth is I’ve been eventing now for five years, and even though I haven’t won a 3-phase yet, I still go into every single event genuinely hoping that “maybe today will be the day, maybe this will finally be *my* event” …and it never is. I keep thinking it’s possible, and my friends all tell me I “don’t suck,” but the reality of looking at the results tells me otherwise.

I’m starting to think I shouldn’t bother with the recognized shows anymore. It’s a LOT of money to consistently wind up mid-pack or last and that takes a lot of the joy out of it for me. I might just stick to schooling shows – they’re cheaper, I can just have fun and there’s no pressure of [not] qualifying for AECs to get me down. I think I’m going to take off July and August from showing (because Atlanta summers are HELL), regroup and then see what happens… this sport is fun, and I want to actually enjoy being average without being disappointed, too.

IRONIC TWIST-OF-FATE UPDATE: The Tuesday after the event, at which point I had already given up on qualifying for the AECs (at Novice), my friend and fellow River Birch Farm teammate Abigail Goodwin informed me that I DID in fact qualify… at Beginner Novice. Wait, what?! It seems I had gotten the placing requirements for BN settled last summer (finished third at the 2018 Area III Championships and also scored a 2nd – which was upgraded to 1st due to my amateur status – at a Horse Trials a month later) but never completed the “three clear XC rounds” requirement since the 2018 AEC was in Colorado and I knew I wasn’t going so I didn’t care. But, unbeknownst to me, those XC rounds didn’t all have to actually be at BN… so when I went clear at our first USEA Novice Horse Trials this year, I actually completed the requirements for my BN qualification and I’ve been AEC-bound since January without ever knowing! HA!! And I never would have even bothered to check if not for Abby, so all the credit goes to her. 🙂

We’re average, but at least we’re consistently average. And hey – someone’s got to be at the bottom of the bunch so that someone else can be at the top, right? Maybe this is just my place in life… to enable others to succeed. *shrug*