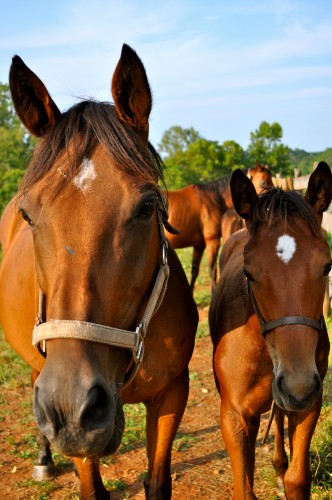 There’s not a whole lot of things in this world better than a soft, cuddly baby. No matter what species it is, you just want to snuggle, poke, and stroke it all day long. However, new research conducted in France suggests that new foals may not only be unimpressed by early handling, but that the attention actually makes them less approachable than foals that have not been handled. To me, this seems illogical, how can handling your babies make them want to interact less? To understand this issue a little further, I looked further into this new scientific study.

As humans, we assume that stroking and gentle physical touch will have a positive effect on babies and animals of all sorts. After all, that’s how we relate to our dogs and cats, right? Horses, however, have a different relationship with touch. In fact, this applies to most animals that produce only one offspring at a time. Nursing aside, mares only lick their foals occasionally, and really only lick them for 30 minutes or less during the first few hours after birth. Compare this to what you’ve seen of dogs and puppies, it seems a little minimal, no?

“Do all species perceive stroking the same way?” ask lead scientists Severine Henry, M.A. Richard-Yris and M. Hausberger. Even when adult horses groom one another, it only takes up around 3% of a horse’s time, and is only restricted to the neck and withers.

The experiment was conducted on 41 foals, with all of them born with a person in the stall to assist with the birth. However, the experimental foals were divided into three groups, and treated thusly: 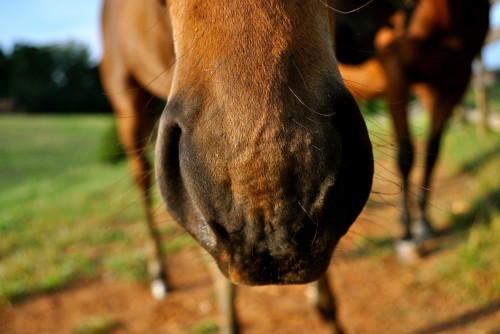 Try to tell me you didn't just "awwwww"

“Forced contact with humans at an early age, and in the dam’s presence, did not improve the ease of handling,” the researchers wrote. “Bringing foals to the teat even seemed to induce a later reluctance for human contact,” they added. It seems that human interference in the nursing process was perceived by the horses as an intrusion on the mare-foal bonding.

As somebody who has encountered more than my fair share of weird home-breds both on the track and in sport horse occupations, I can’t believe that early handling does more harm than good. However, I do wonder about our relationship with touch versus that of a horse. When I was young, a wonderful horseman cautioned me never to vigorously clap a horse on the neck (to say, ‘well done!’) because the horse would not interpret it as a congratulatory pat, but an offensive smack. In horse-world, they would only encounter that type of contact when being kicked by another horse, so who was I to go around smacking them and not respecting their physical language?

How do you see this, Eventing Nation? Did this spark your interest into the study of handling young foals, or do you discount their findings with years of experience the other way?