Life isn’t always big. Sometimes it’s just the day to day. After several months of upheaval I am quite enjoying the day to day. The past few weeks have been regular. Or at least my regular. Six days a week of a 4:20 a.m. alarm so that I can feed the horses at home and get to the track with enough time to have horses tacked when our rider arrives at 6. On Thursdays we don’t train the racehorses and the alarm gets moved back for a glorious 5 a.m. sleep in. Track chores go until about 11 if we aren’t racing that day. Then it’s home for lunch and some sit-down time and then I’m off to take care of Crash and Albert. I let them play in the round pen while I clean their paddocks and then depending on my schedule I ride them or do ground work.

I’ll always be a sunrise person.

Woah, this has to be the driest blog post ever.

It’s a bit like retraining these OTTBs — dry is what I’m going for. I wouldn’t call it boring, though; the little breakthroughs can be just as exciting as a first three foot fence. Especially with Albert. He was a great racehorse, a champion. He didn’t get that way by being easy going under saddle. His riders liked him, his personality was fun, but if they turned him around to gallop they could plan on being run off with. He gave 100% everyday — he loved being a racehorse. Now it’s up to me to teach him that his body can have a break. I get to teach him how to relax, to stand around, to have his brain engaged while his body gets soft. 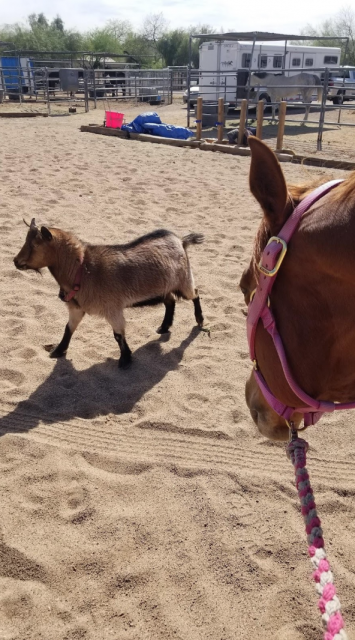 He really likes the barn goat.

Crash was not a champion racehorse, and he didn’t do it for long. His retraining is totally different. He’s got relaxation down to a science. I’m ready to start bringing him on adventures, like going to friend’s arenas and going on trail rides. He’s honestly like riding a happy go lucky green broke horse, no baggage, no issues. It’s possible that he’s already wrapped me up in his “Tiz bloodline” spell. Even my often pragmatic husband thinks he is something special. 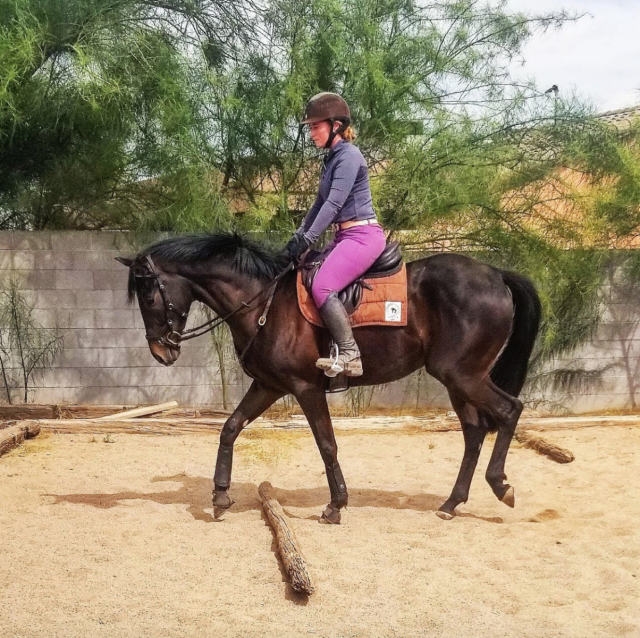 I just want to squeeze his cute face!

Albert’s retraining is all about the day to day. His first order of business is snuggling and begging for treats from every person that walks by his pen. I haven’t trained this behavior — his years at the track surrounded by loving grooms, trainers, and owners created a horse that loves attention. His manners outside of his paddock were lacking though. His first response to any stimulus (noises mostly) was to zoom. Over me if I was leading him, or under me if I was riding him, we practiced some fabulous whirling dervish moves on our second ride in the arena after someone slammed some stall doors open. 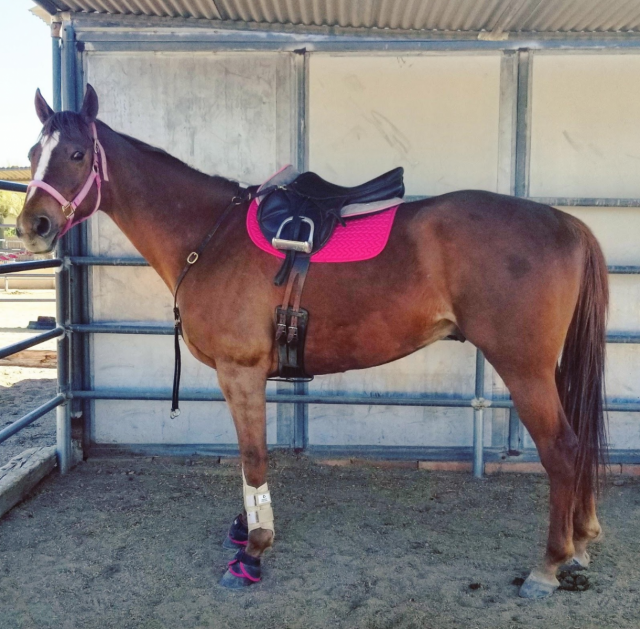 Some side-eye possibly directed at the pink tack.

I stepped back from riding him for several days and instead worked him with the rope halter. Helping him learn to relax into a stimulus. He was missing the classic ‘lick and chew’ response to processing information; instead he’d just hold his breath and look at me. I worked on lowering his head and showing him the way to releasing tension and he has soaked up the knowledge like a sponge. With in a few short minutes of going to work now he is licking and chewing, yawning, rolling his eyes, and even rolling while I hang onto the lead rope. He’s almost a tension release junkie now that he is realizing how good it feels.

If I get Crash out first Albert stares at me the whole time, begging for his turn. After seeing real progress in Albert’s responses to stimuli I decided to hop on again. He was a different horse. We walked and trotted all around the arena on a soft rein. Once his racing career is a more distant memory I believe that this champion racehorse will be capable of anything, from teaching beginners how to ride to earning piles of blue ribbons in the show ring. His body, joints and brain continue to loosen up as he spends more and more time moving around instead of in a stall.

Albert isn’t a difficult horse, but all the years I’ve spent working with difficult horses have given me the skills to give him the best opportunity in this new life. I look a bit serious while I ride Albert, not because I’m nervous, but because I’m concentrating. I have to pay attention so that if his racehorse brain kicks in I can show him how to release the tension and continue enjoying the ride. 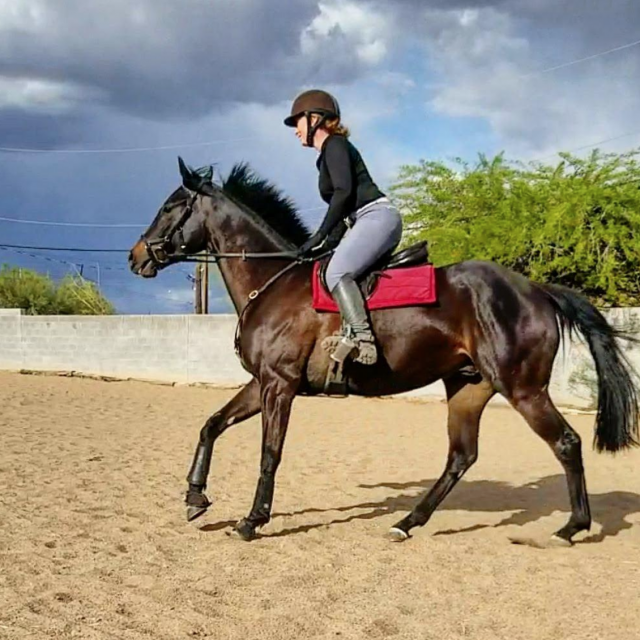 Crash is the opposite. I wander around on him grinning like a loon. Nothing startles him, I think the biggest challenge with him will be to not push him too hard too fast, he’s just a baby after all. Neither of them need to know that I have big plans in October. All they need to know is that day in and day out I will give them the time they need to understand each new question I ask and skill I teach.