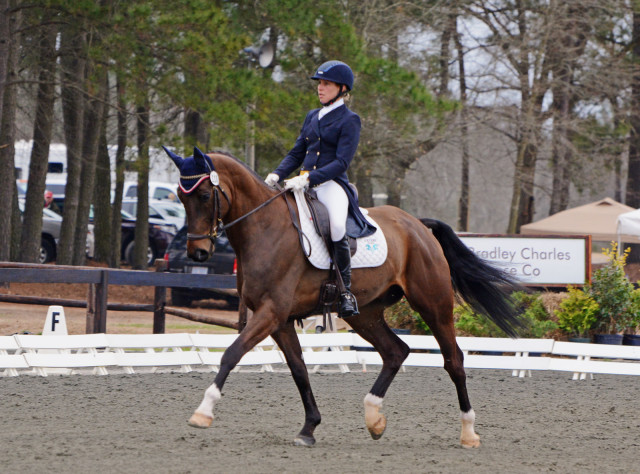 It’s been a soggy day of competition so far at the Cloud 11-Gavilan North LLC Carolina International, with horses and riders battling chilly temperatures and steady rain. Despite the less than deal conditions, we’ve seen some excellent fancy prancing in the Attwood Equestrian Surfaces CIC3* thus far, with Liz Halliday-Sharp and Fernhill By Night leading the division on 46.6 at the halfway point.

That’s a higher score than we typically see from this pair, which is indicative of the stringent judging from Christian Landolt and Mark Weissbecker across the board. But while the judges have been strict, they’ve been very consistent with their marks, rewarding accuracy and obedience on a day when many horses have been a bit spooky due to the weather and atmosphere. 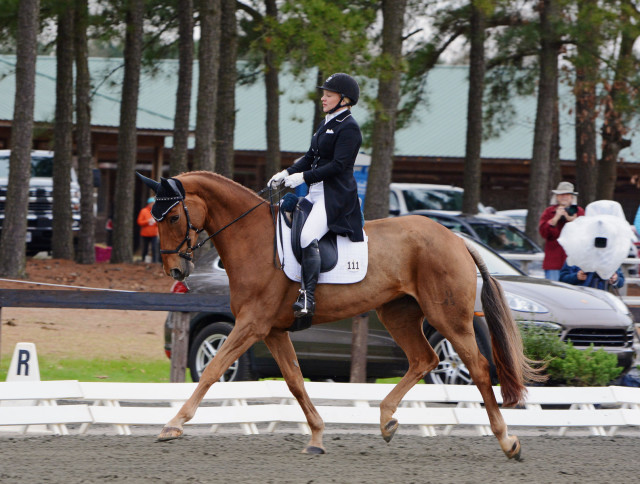 Liz said after the test that she was especially pleased with the trot work from “Blackie,” a 12-year-old Irish Sport Horse gelding owned by Deborah Halliday. This pair also led the dressage two weeks ago in the CIC3* at Red Hills before a pair of angled tables caught them out early on Hugh Lochore’s cross country course. Liz pulled up to re-route here and will seek redemption over another of Hugh’s courses as she looks ahead to their first CCI4* at Rolex Kentucky.

RF Demeter wore a Micklem bridle for the first time in an FEI competition today, forgoing her usual double bridle and flash noseband with Marilyn Little in the irons. She went very nicely in it for a score of 47.6 to sit in second place. Marilyn and “Demi,” a 13-year-old Oldenburg mare owned by Team Demeter, won this event last year, and we’ve predicted them to win again this weekend. 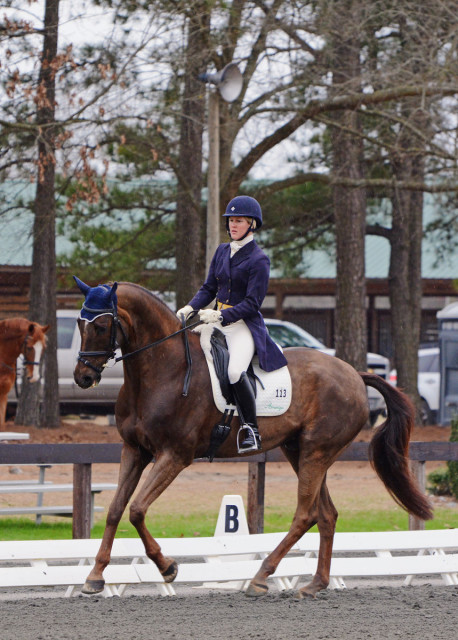 Allison Springer and Arthur had a very smooth test to sit in third place on 48.3, with no spooks at all from the horse. Arthur, a 16-year-old Irish/Thoroughbred gelding owned by the Arthur Syndicate, typically gets his big spooks out of the way in his first events of the season and settles nicely in his final prep events leading up to his big spring outing. This year, Allison and Arthur will once again return to Rolex, where they won the dressage last year.

With the USEF Network here with a full crew live streaming all phases of the CIC3*, there are cameras located around the arenas, and the plastic bags placed on them to protect the equipment from the rain has made for some unhappy horses so far. Many riders, including Allison, smartly took the time to let their horses get a good look at the cameras before starting their test. 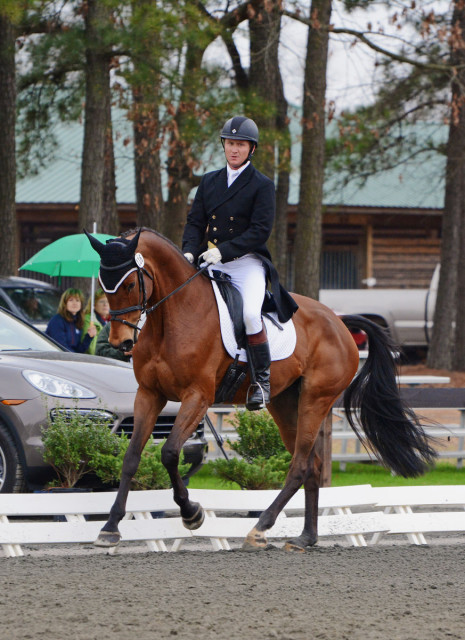 Kurt Martin and Anna Bella also put in a lovely performance to score 48.6 for fourth place. This horse a 9-year-old Holsteiner mare Kurt owns and has produced through the levels, is a blast to watch on the flat, with her sassy tail flicking away. She brings that same attitude and tenacity to the cross country course, where she’s incredibly bold with a scopey, powerful jump. Kudos to Kurt for ditching his top hat for a helmet!

Lauren Kieffer and Meadowbrook’s Scarlett round out the top five at the lunch break on a score of 49.2 in the horse’s first three-star. An 8-year-old Thoroughbred-cross mare owned by Marie Le Menestrel, Scarlett won the Jersey Fresh CIC2* and Bromont CCI2* last year, firmly solidifying herself as yet another extremely talented mare in Lauren’s barn and a serious horse to watch for the future. Also, that’s three mares in the top five! 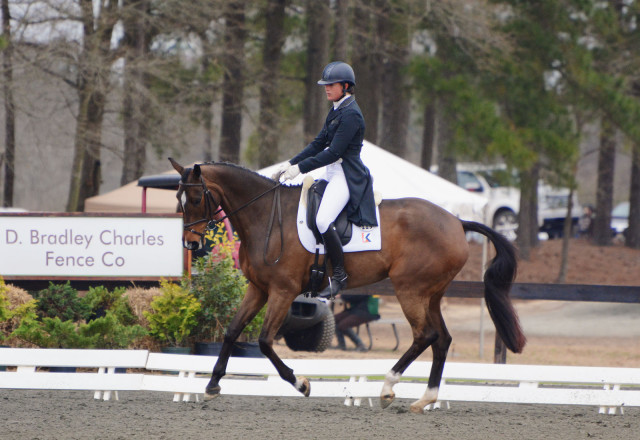 We have plenty of exciting names still to come as we look ahead to the second half of the CIC3* division. Remember you can watch it all live at this link thanks to the USEF Network. Karen O’Connor and Charlotte Skinner-Robson are providing excellent commentary, and all the rides will be available on demand later in the weekend. CIC3* and CIC2* show jumping and cross country will also stream live over the next two days.

Thank you to the volunteers and organizers for all the hard work on what has truly become a class event. From the USEF Network live stream to the $70,000 in prize money and the cozy competitor’s hospitality corner and snazzy media tent, it’s clear a lot of time and thought has gone into making this a weekend we won’t soon forget. Stay tuned for much more from Carolina International as we bring you coverage from CIC dressage! 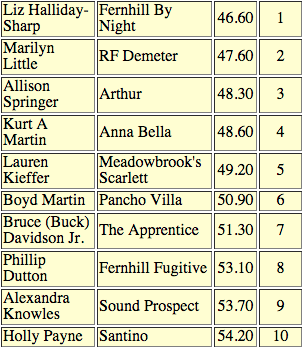