The international divisions concluded on Saturday at Hagyard Midsouth Three-Day Event & Team Challenge, as well as Training through Intermediate horse trials. Let’s see how they finished out! 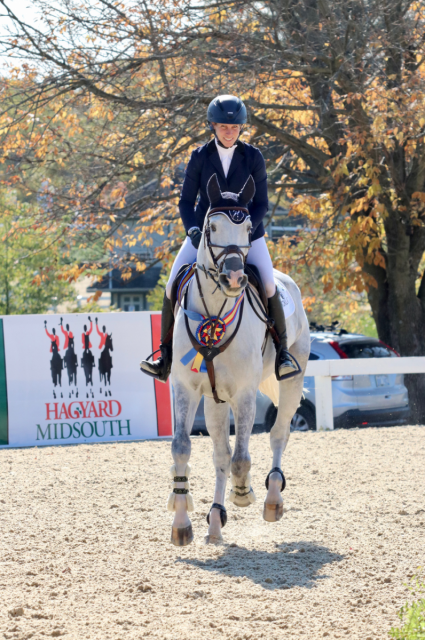 Liz Halliday-Sharp and Buck Davidson played hot potato with the CCI3*-L lead throughout the competition, with Liz out front by 0.1 point after dressage, handing it off to Buck after picking up another few fractions of a time penalty in cross country, then taking it back again when Buck had 1.4 time in show jumping. Liz’s partner: Cooley Stormwater, a 7-year-old Irish Sport Horse gelding (Camillo VDL x Thornfield Calypso) owned by the Stormwater Group. Congrats on a first international win for this horse!

“He truly fought for me from start to finish and I am so very proud of how far he has come!,” Liz shared on social media. “This is so exciting for his owners, Debby Palmer and Pru Dawes-Rowland, and all of us who have know this horse from the green 4-year-old that Cooley Farm and I found in Ireland three years ago — to say I am proud is an understatement.”

Liz also finished seventh with Ocala Horse Properties, LLC’s Cooley Be Cool. It’s been funny to not have Liz to cheer on at the Young Horse World Championships at Le Lion d’Anger this year, which is wrapping up today in France — you can catch up on Tilly’s live coverage here. Liz has had her youngsters on stage there the past three years, most recently finishing a remarkable second with Cooley Moonshine and 13th with Flash Cooley in 2019, and a third and a seventh respectively the year before that. But it’s been a treat to follow Liz and her talented string stateside, too, and in her own backyard here in Lexington.

Buck was second with Victor B Z, a 10-year-old Zangersheide gelding (Victor E x Kanridge, by Kannan) owned by Carl Segal and the rider. He also finished fifth with Sorocaima, a 9-year-old Thoroughbred he indicated on Facebook is now owned by one Aubrey Davidson. We’ll be on the lookout for a rainbow-dyed forelock and detachable unicorn horn at future events! Sydney Hagaman and her own Charmeur, a 7-year-old German Sport Horse gelding (Cezaro x Glenn Szerin III, by Glenn Alme), rounded out the top three. It was the debut long format three-star for both horse and rider and, having added just 0.8 time in each jumping phase, they are surely over the moon with this result.

Lillian Heard and Charmking, a 9-year-old Holsteiner gelding (Cassito x O-Heraldika, by Heraldik xx) owned by Charmking LLC, stalked their way up the scoreboard from fourth after dressage to third after cross country, eventually landing in second thanks to double-clear jumping rounds, a feat managed only by the top three in this division.

Liz Halliday-Sharp was fourth with The Monster Partnership’s Cooley Quicksilver, and also seventh with Flash Cooley. We’ve also just received word that the USET Foundation has awarded the Jacqueline B. Mars National Competition & Training Grant to Liz and Cooley Quicksilver. As the recipient of the grant, Liz will receive $10,000 to support her trip from Lexington, to Temecula, California, to compete in the CCI4*-L at the Galway Downs International Three-Day Event on Oct. 28-31.

“It’s very, very exciting, and it makes a big difference to the owners as well—we’ve got to support the good owners in the sport as much as we can,” Liz said of receiving the grant. “We’re very grateful to the [USET] Foundation. It’s an expensive sport, and you don’t get a lot of prize money. [This] really makes it all possible.

“I think next year, we’ll start to think about five-star competition for [Cooley Quicksilver],” she said. “I very much hope he’ll be considered for the Olympic Games, and that’s part of our reasoning for going to Galway.”

Rounding out the top five, Kevin Keane was fifth with his own Sportsfield Candy.

Cross country leaders Will Coleman and Unlimited had a rail down, as did second-placed Liz Halliday-Sharp with Maryville Sir Henry. That left the door wide open for Karl Slezak with his own Hot Bobo to take the lead, and they happily obliged! This 7-year-old Irish Sport Horse mare looked full of jump on the cross country yesterday.

Training through Intermediate horse trials divisions also finished up on Saturday. The winners: