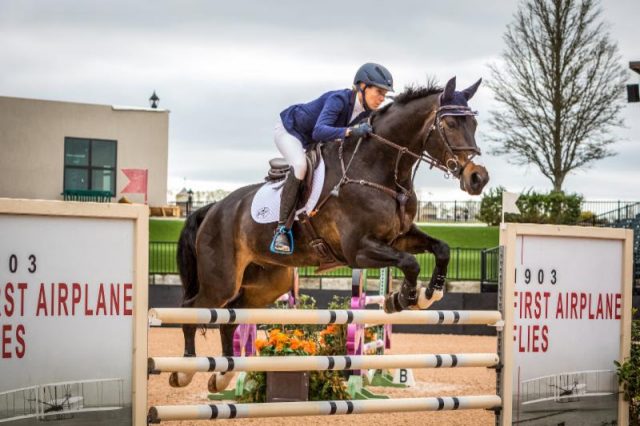 The Fork at Tryon CCI4*-S dressage leader Liz Halliday-Sharp headed into show jumping with a rail in hand and ended up cashing it in on the final fence. No mind, though — she still lays claim to the top two spots in the division (and the no. 5 spot to boot), and says she couldn’t have been happier with her horses’ performance.

“All my horses jumped incredible today,” Liz says of her first-placed ride, Fernhill By Night. “Blackie jumped out of his skin, and I thought I had it in the bag — he was my first ride of the group.”

Liz says she rolled down to the last fence with a little bit of a turn on him still, and he twisted the tiniest bit into his left shoulder in the air — a rare hiccup for the 16-year-old Irish Sport Horse (Radolin x Argentina XII, by Argentinus) owned by Deborah Halliday.

“It was probably my fault, maybe I was a little too casual about it because I thought I had it done and I know better, but the horse jumped amazing, they all did, so it’s not his fault,” Liz says. 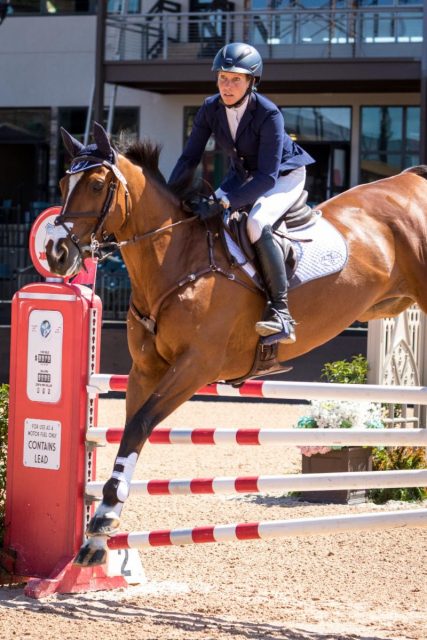 Liz’s third horse in the division, Cooley Quicksilver, also had a fault-free performance, boosting him from 8th after dressage to 5th. Liz has since withdrawn him from cross country, per her plan to give the horse a shot at defending his CCI3*-L title at Ocala International next weekend. The event is also a selection trial for the Pan American Games.

“He is incredible in cross country, he’s a wicked cool horse, but I’m gonna go ahead and do the selection trial for the Pan Ams because that would be my goal for him,” Liz says. After Ocala the 8-year-old Irish Sport Horse gelding (Womanizer x Kylemore Crystal, by Creggan Diamond), owned by The Monster Partnership, will enjoy a little holiday then do a CCI4*-S in Germany and, should he be selected for the Pan Ams team, represent the U.S. in Lima, Peru.

Liz says she was thrilled with his performance at The Fork and is excited for his future. “He’s such a cool horse. He’s a total freak. He’s not normal and I think he kicked out behind over every single warm up fence, he always does, he probably did it over a few in the ring because he just loves it and he comes out and he’s like ‘Yeah! Come on, give me something harder!’”

“He is a cheeky monkey, he’s really naughty,” she says. “I love him, he’s so flexible and now he’s figured it out and he just thinks it so easy. It’s so fun to ride him. He’s one of my favorite horses to jump because we know each other really well, and he’s just an incredible athlete.”

Looking ahead to cross country tomorrow, Liz has a custom plan in place for both Blackie and Deniro.

“They are both slightly in a different place because Deniro really needs a good prep run for Kentucky,” Liz says. “I don’t plan to run him slow because I don’t think that would suit him. I need to get him a little bit more with me — he was a bit of an animal at Carolina. He’s like an airplane now, he’s so strong and has so much power, and I just need to make sure he’s sort of listening to me and that I can put him in the same place looking ahead to Kentucky, so that will be my goal with him.”

She aims to let Blackie have a run at the blue ribbon. “I’m gonna have a damn good crack and try and make the time and try and take him to the win,” she says.

“I think it’s a stronger track than Carolina, in my opinion,” Liz says. “I think there’s a lot more to do than there was at Carolina, so it will take some riding for sure, especially if you’re going fast. So I’m just going to go out and try to give them a really great run and lots of confidence and kick on.” 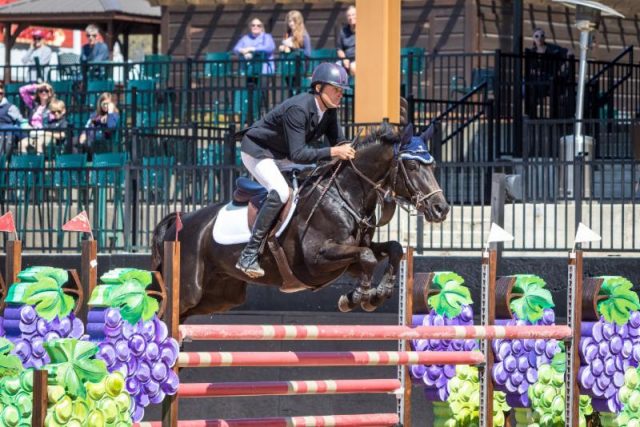 Boyd Martin and Tsetserleg, a 12-year-old Trakehner gelding (Windfall x Thabana, by Buddenbrock) owned by Christine Turner, came into show jumping in equal third place with Felix Vogg and Volero. The tie was broken when the latter pair picked up two time penalties.

Boyd had four rides today — two in the Advanced (Contestor and Long Island T, who sit 5th and 4th respectively) and two in the CCI4*-S (Tsetserleg, 3rd, and On Cue, who is 25th).

“I had an up and down day,” Boyd says. “The two horses I was worried about having tough rounds on jumped like bunny rabbits. Contestor and Tsetserleg, they were fantastic. My two reliable jumping horses were a little bit spooky.” (Long Island T had two rails; On Cue had three.)

Boyd was pleased with Tsetserleg’s fault-free round. Because “Thomas” can be tricky sometimes in combinations, Boyd schooled him early this morning over a couple small combinations over and over again, which he says got the horse thinking, waiting and slow. The preparation paid off, as he was foot-perfect through the combinations in the ring.

“I was pleased that he jumped not only clear, but in good fashion,” Boyd says. “I think leading into Kentucky it’s not so much the result, but the feeling they’re giving you when you ride them.”

Boyd is heading into cross country tomorrow on a mission for redemption after he and Tsetserleg’s WEG blip at the water.

“It’s a very weird sport, this eventing, because one jump can just destroy emotion or feeling and everyone’s moral for months and months and months, so it’s good to be back here to be honest,” Boyd says. “And obviously, the boat in the water, I really want to give him a good ride there and I’ve probably gone over that jump [in my mind] more times, you know, what I did wrong or what could have happened differently than any other jump I’ve ever jumped. So I’m looking forward to going in there and riding that in a better way.”

The Fork is a final pre-Kentucky run for Tsetserleg and Long Island T. Boyd aims to give them a quick round, taking advantage of the good footing, without being reckless, so that they come off course with their composure intact. “Like sometimes if you them real fast, the next time you ride them they’re a bit out of control, so you try and give them a good blow out here, a good fitness run, but then also schooling them a little bit so that they’re waiting and thinking for you, so it’s a catch 22.”

Meanwhile in the CCI3*-S, Doug Payne remains in the lead with Starr Witness. The 8-year-old Dutch mare (Chello II x Carmen, by Veneur) owned by Laurie McRee will head into cross country on her dressage score of 27.6.

Courtney Cooper and Excel Star If Never, a 7-year-old warmblood cross (If Ever 111 x Wuberlina H, by Wuberlina H) owned by The Constellation Partners, are out front in the CCI2*-S on their dressage score of 36.3.

Much more to come. Go Eventing. 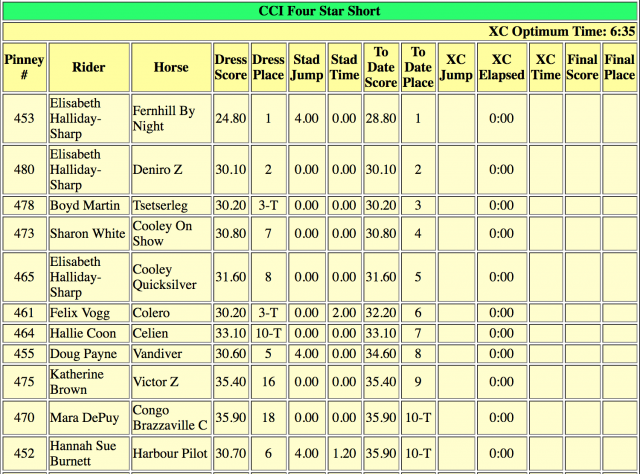 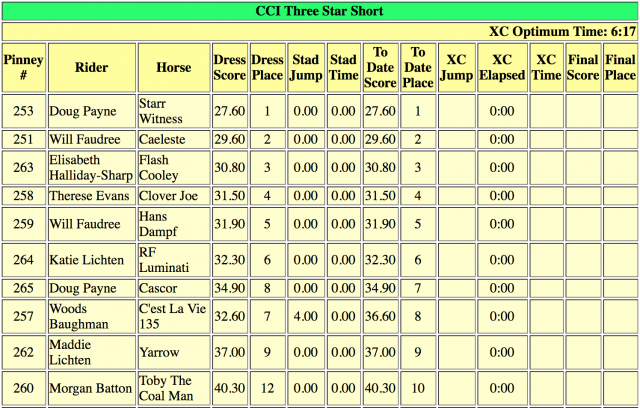 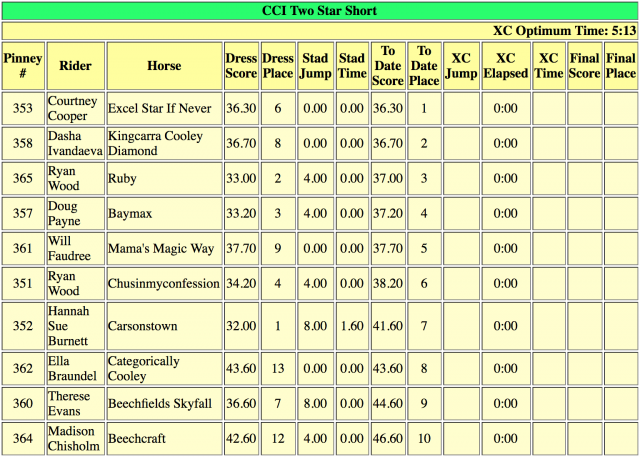