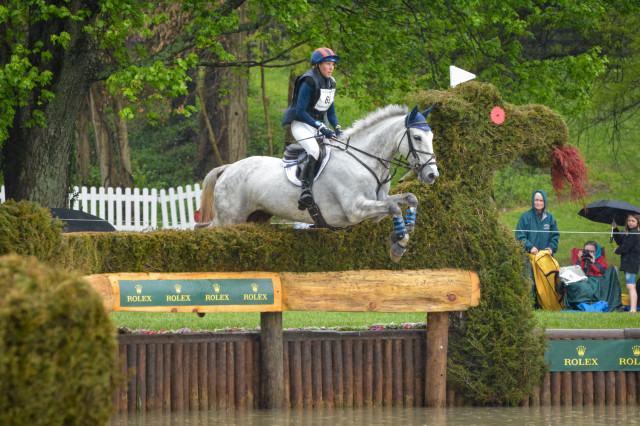 Our hearts are broken for Liz Halliday-Sharp, whose four-star partner HHS Cooley was euthanized after a cross country fall in the CIC3* at Burgham Horse Trials in the UK on Saturday.

Liz, who was released from the hospital today after being treated for a C7 vertebrae fracture in her neck, shared further details on her Facebook page about the accident that resulted in the loss of the horse she called her partner and best friend:

“I want to put something out there about why this tragedy happened to my wonderful horse, and I’m hoping that it might trigger some consideration and maybe some change for the future from the FEI and national federations. I also want to say that in no way at all am I blaming the Burgham event itself, as they have all been very helpful and supportive throughout this terrible situation.

“Where we fell was at a very wide, but not very tall, open rail oxer off a turn. When I walked the course I remember thinking it was one of the widest I had seen in an Advanced competition and that it would demand respect and proper riding, and I was concerned that a horse could possibly misread it as a bounce.

“I went out on Blackie (Fernhill By Night) first and he jumped it well, and when I went out on Cooley I planned to give it the same amount of respect. I arrived at the fence with the correct pace and a good shot (confirmed by people who saw) and plenty of leg on, and as Cooley jumped he must have suddenly thought it was a bounce, and he came down in the middle of the fence, just in front of the back rail.

“The fence was pinned, but I do not remember if it released and no one seems to be able to answer that — anyone I ask says they weren’t paying attention to the fence, as they were all apparently attending to me since I had hit the ground so hard and was unconscious, and of course my horse was injured. (BE has since confirmed that the back rail reverse pin did deploy. See below for an update.)

“Cooley was the bravest, best cross country horse I have ever had, with more scope and heart then any horse I have ever sat on, and there is no way that he would have jumped into that fence unless he thought that he was supposed to and had just misread it.

“This is not the first time this year that an experienced, talented horse has misread and jumped into one of these open oxers and that the horse and rider have both been seriously injured. Sadly, on this occasion my wonderful Cooley had to pay the price with his life.

“I feel that perhaps the FEI and national federations need to think about how wide an open rail oxer can and should be, and perhaps beyond a certain width they should be made as a table or be ascending. Just because a fence is pinned does not mean that it should be pushing the boundaries of what horses can understand. Just one honest and experienced horse misunderstanding and losing his life is too many in my opinion.

“I hope that I am not alone in feeling this way, and perhaps if anything can come of this horrible tragedy, it can be some change and some consideration of these particular fences. My broken heart hurts so much more then my broken neck, and I cannot imagine going home and not seeing my gorgeous grey boy over the door.”

Liz’s observations line up with findings from a report released last year: “Analysis of Risk Factors for Horse Falls in the Cross Country Test of FEI Eventing.” This external audit of our sport commissioned by the FEI focused on data collected in the five-year period of 2010 to 2014.

Among its findings were associations between certain types of fences and an increase in the risk of horse falls, particularly open-topped square spreads and corners.

“Square spreads were higher risk fences in all situations,” the report says. “Consider judicious replacement of some square spreads with ascending spreads. When square spreads are used, a solid top may reduce the risk of a horse fall.”

There were fewer horse falls recorded at corner fences that had an open front and a solid top as well. 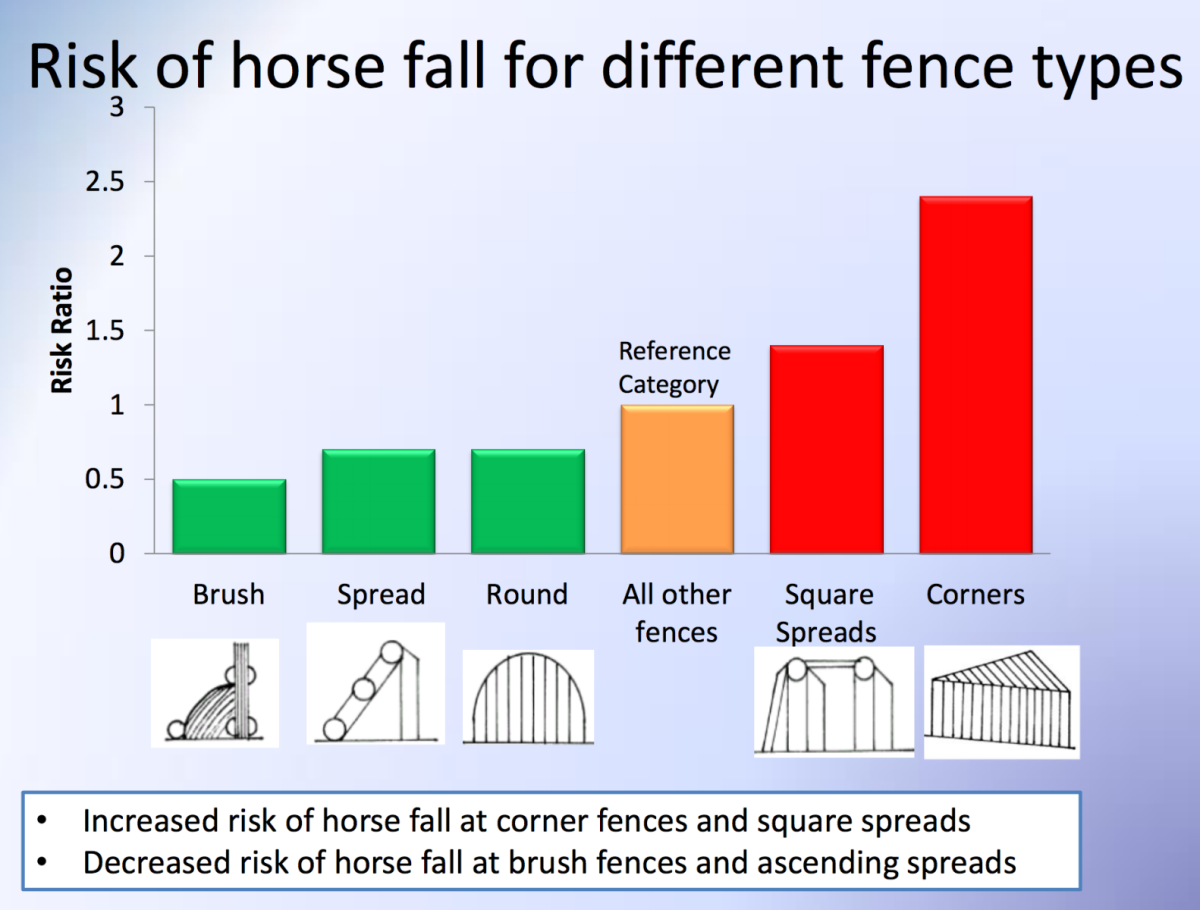 The study also found frangible fences were associated with an increase in the risk of horse falls: 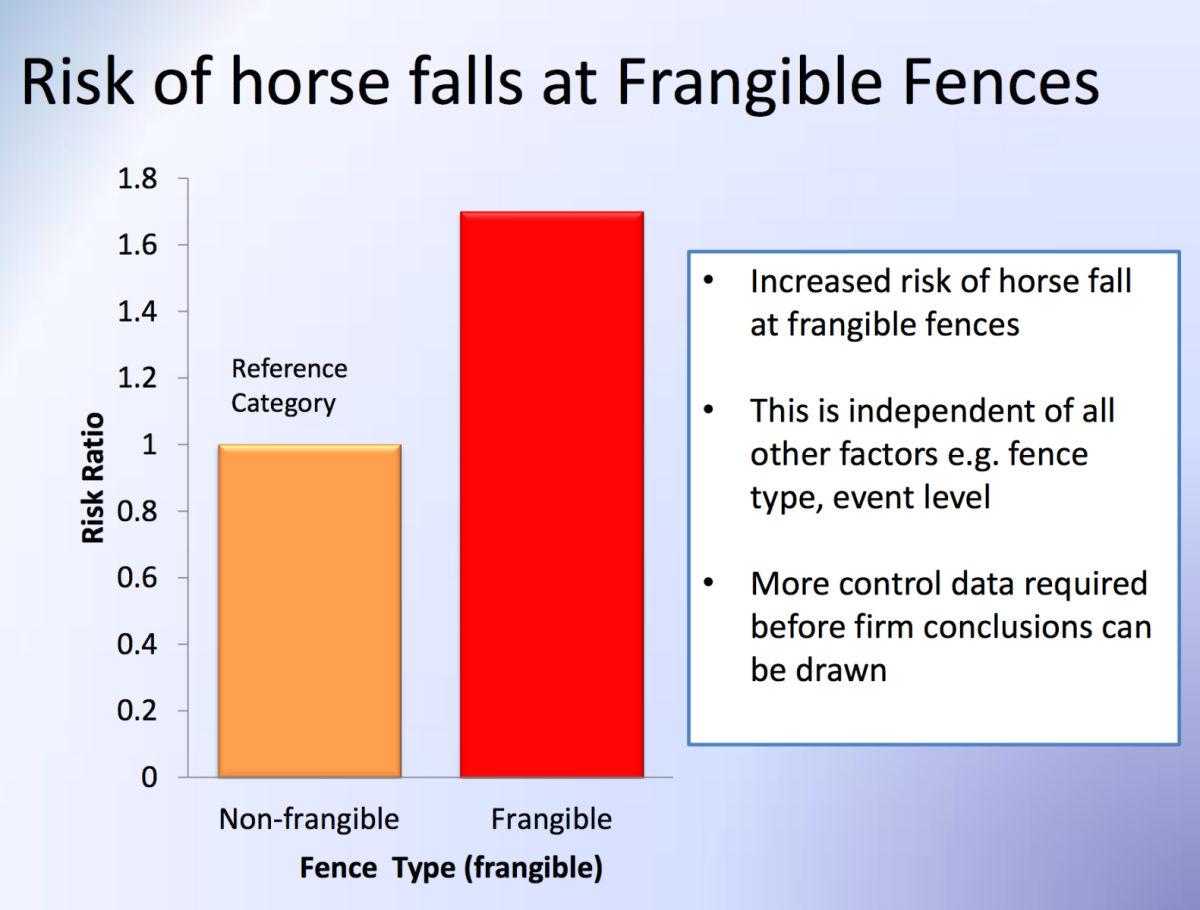 The study notes that “this may not be a direct effect and could reflect the type of fence at which frangible devices are fitted.” Which is to say, fences with a higher risk factor to begin with are more likely to be pinned. But as Liz points out: “Just because a fence is pinned does not mean that it should be pushing the boundaries of what horses can understand.”

Another consideration from the report: “It is possible that riders approach frangible fences differently, assuming a degree of ‘safety.’ If the frangible devices are not being activated at the correct force this could increase the risk of a horse fall.”

According to the data collected from fence judges in the report, in 94 percent of horse falls at frangible fences the frangible device had not activated.

The study does not account for how many potential rotational falls were prevented by properly activated pins, which is surely a significant number, but the use of this technology clearly warrants further study. As the study recommends: “Frangible fence design and function should be explored, and all instances where frangible devices are activated should be recorded with the same level of detail as for horse falls.”

As eventers we must never stop asking the hard questions: “What more can be done?” and “What can I do?” Research efforts are ongoing, but the information we collect is only as good as our ability to disseminate it and put it to practical use.

We owe it to Liz, and to Cooley, and to every horse and rider who have paid an all-too-steep price to double down on efforts to make our sport as safe as possible within its inherent paradigm of risk.

What do you think, EN? Is it time to re-evaluate open oxers and other square spreads on cross country courses?

The EN team continues to extend our condolences to Liz, Al, Deborah, Gemma and all who knew and loved this very special horse. #RIPCooley

Update Aug. 2: Liz sent EN the following update: “I received an email from British Eventing to say that the back rail reverse pin did deploy in my fall. The fence was pinned to the highest standard and it probably saved my life, but if the fence had been built slightly differently it probably wouldn’t have happened at all. I feel that we all need to keep fighting to make this sport safer.”