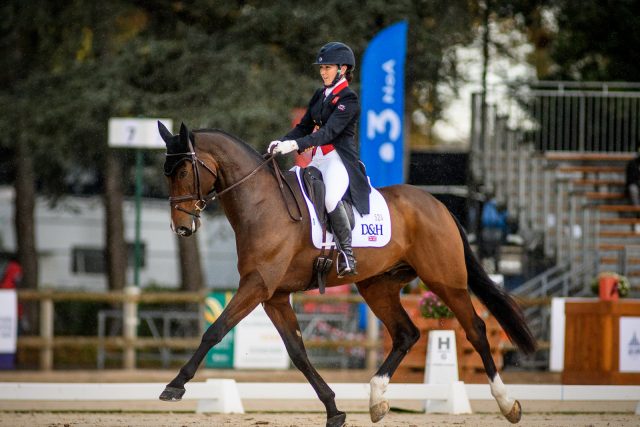 London 52 and Laura Collett take the lead in the horse’s debut CCI5*. Photo by Tilly Berendt.

It would have been easy to become complacent in this morning’s tiny final dressage session, which saw just 15 of the 47 entered combinations come forward — after all, we saw the venue record smashed twice over yesterday, with Chris Burton and Graf Liberty taking the lead on an extraordinary 22.

But to be complacent would have been a disservice to the quality of the final competitors today, among whom were the two horses with the best dressage average in the field. Though one of those, Laura Collett‘s London 52, is a debutante at the level, a 20.3 in Burgham’s CCI4*-S this year among a myriad of extraordinary scores meant that all eyes were on him as he marched up the centreline. 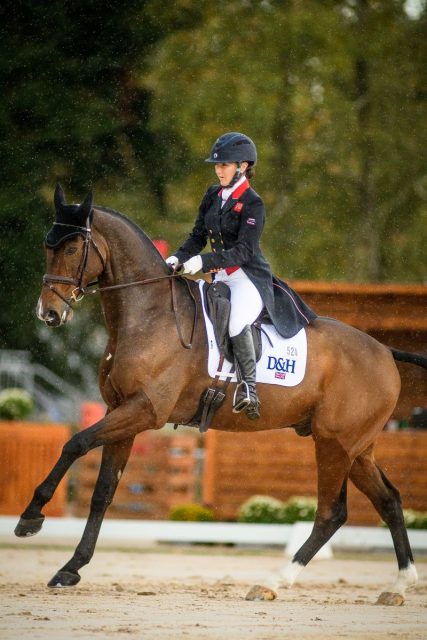 Typically expressive, London 52 skips to a 21.3. Photo by Tilly Berendt.

He certainly didn’t disappoint. Joint-owner Karen Bartlett, who owns the eleven-year-old Holsteiner with Laura and Keith Scott, had tears in her eyes before the trot work had begun in earnest, and they were amply rewarded through as ‘Dan’ got more and more fluid and soft throughout the test. After finishing on a 9 for their final halt, the final score was writ large on the scoreboard: a 21.3, a new venue record, and a personal best for Laura at this level. But despite the excellent work the pair produced in the ring, Laura wasn’t always sure that it would come together.

“Luckily he got better and better,” she says with a smile. “He was like, ‘where am I?! What am I doing?!’ But then he just relaxed into it and I could really ride him. I know how good he can be, and for his first five-star, it’s exciting for the future.”

The canter work in the latter half of the test was a particular highlight, showing London 52 at his most extravagant and soft.

“He felt like he let me in there,” explains Laura. “I know he can do better trot work, but I had to be a bit careful and cautious because he felt anxious. It wasn’t until the canter that he really let me in and I could show him off. But just to be sat on a horse like that is a highlight, really.” 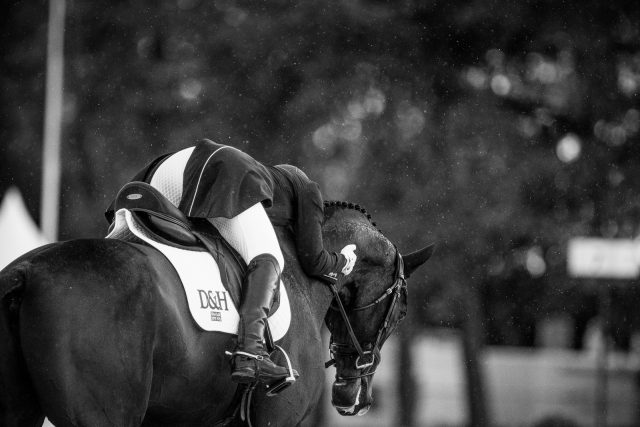 Laura’s journey to this level with London 52 has been a tale of ups and downs, as is often the case with inexperienced horses learning their way in the world — but the pair’s trajectory has been particularly high-profile due to his significant successes, including a win in Blenheim’s eight- and nine-year-old CCI4*-S in only his second season of eventing, a win at Chatsworth’s leg of the Event Rider Masters, and victory at Boekelo CCI4*-L at the culmination of the 2019 season. It was this final victory, which Laura had intended as a way to inject the fun and confidence back into her horse after mishaps at Bramham, Aachen, and the European Championships, that has served as a turning point for the gelding, who won his final prep run at Little Downham CCI4*-S earlier this month.

“It’s been a rollercoaster to get here, and he’s still only eleven and only been eventing for four years,” says Laura. “The biggest thing is that there’s still so much to come. I’m just so proud of how he coped and how he trusted me in there, because he’s quite a shy horse. To go in there with the rain and everything is quite an ask for a horse like him. The trust he has in me — let’s just hope he takes that forward to tomorrow!” 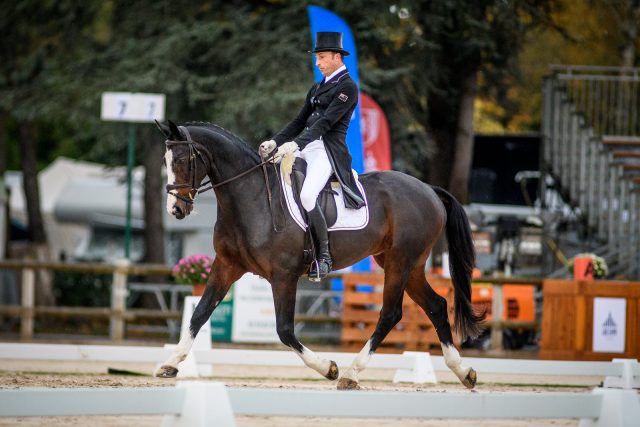 Tim Price and Wesko deliver the goods yet again. Photo by Tilly Berendt.

Yesterday’s leader and runner-up Chris Burton (Graf Liberty, 22) and Piggy March (Brookfield Inocent, 22.2) move down to second and third place, respectively, while New Zealand’s Tim Price and 2014 Luhmühlen winner Wesko take fourth place at the end of dressage, closing out the day’s competition with a smart 23 to earn Tim his own best-ever CCI5* mark.

“He’s just like an old friend,” says Tim. “But he isn’t always perfectly behaved, so you can’t take any liberties with the partnership. This week he’s being really good, though, and he’s felt really happy, so he could just go in and do his job. I’m really pleased with him.”

Though Wesko’s marks remained consistent through his test, Tim, like Laura, was particularly happy with the canter work.

“I think I had him a bit more up and away in the canter,” he explains. “He’s got quite a polite canter, and I’m quite a polite rider, generally speaking, so sometimes I can sit there a bit comfortably — and then you don’t have the jump for some of the movements, like the changes. I was happy with the canter being a bit more today.”

Tim and Wesko return to Pau with a score to settle after taking a tumble in the final water last year when in a competitive position. The fall was unrelated to a fence, but rather, one of several we saw due to a hole in the footing.

“It’s still a hole in my heart,” he jokes ruefully. “It was such a shame — it was the end of the course and he’d given me everything, we were on our minutes, but that was last year. I’m really pleased with the course this year; I think it’ll suit him as, generally speaking, I think this competition does.” 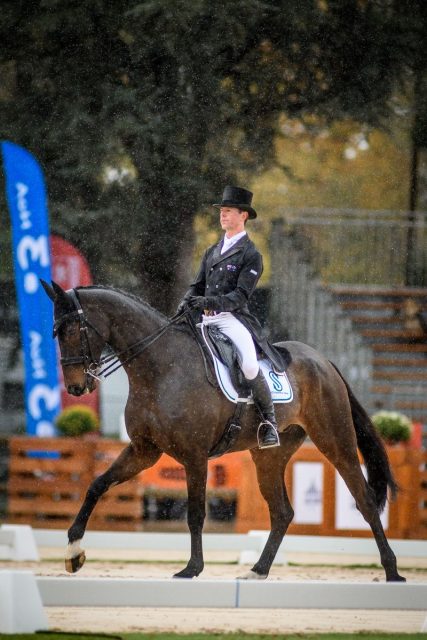 Kevin McNab and Scuderia 1918 A Best Friend produce a personal best at any level to sit equal fifth after dressage. Photo by Tilly Berendt.

Australia’s Kevin McNab and the rangy ten-year-old Scuderia 1918 A Best Friend sit equal fifth with Ros Canter and Zenshera after posting a 24.8 — a personal best across the levels for the gelding, who was originally produced by Germany’s Jörg Kurbel. This, too, is a best-ever five-star score for the rider — though he was surprised to manage it on his debutante ride rather than yesterday’s returning Scuderia 1918 Don Quidam.

“You never know what to expect with Harry, because he’s one of those horses that is a real competitor and he lifts to the occasion,” says Kevin. “I wasn’t expecting him to be in front of Don, but I’m very happy with his test and with both horses.”

Kevin describes Harry as a horse who’s surprisingly anxious for a big horse — but his performance in the ring today looked mature beyond his age and experience.

“He rose to a really nice energy level, and it made the test flow really well,” says Kevin. “When he did his first change and it felt good I thought, ‘well, we might be in business!’ He does lovely changes, but they can sometimes be a bit boring — if he has that little bit more energy and lift, he does a really lovely change.” 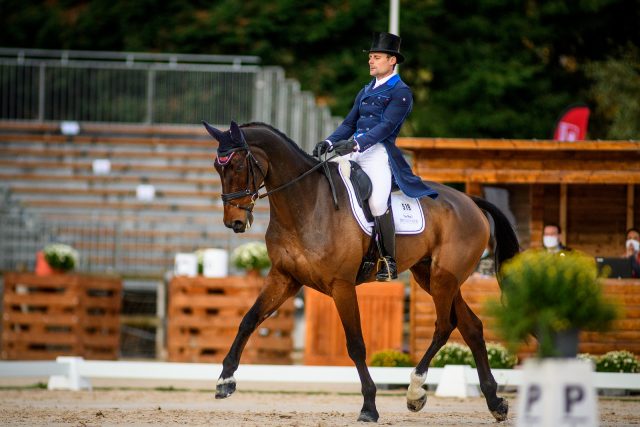 Consummate showmen Alex Bragg and Zagreb lie seventh overnight after a typically flowing test that earned them a 24.9 — an effort made more admirable by the fact that this test, which features 8m circles after the trot extensions, wouldn’t be obviously suited to a 17.3hh horse.

“It’s really difficult for him, and it’s tempting with him to try to ride him powerful all the time,” says Alex. “For the event horses who have to gallop, you don’t have the strength of the pure dressage horses, and so they can’t sit and do an 8m circle with the same expression. But if you can keep the balance, he moves well enough and then it’s pleasant to watch. If you’ve just done a really nice extended trot, then the judges are already thinking he’s a nice mover. It’s an accuracy movement, really, showing suppleness — they’re not asking for power. I tried to ride it like that, and it came off.”

This stalwart partnership returns to Pau after two big ‘nearly’ results here and at Luhmühlen last year, when they finished fourth and third, respectively.

“The horse has been getting better and better as he’s getting older,” says Alex fondly. “Obviously with older age, he needs to be warmed up a little bit differently, but he’s learning the ringcraft and I don’t have to worry about him spooking or squealing quite so much. He’s still very enthusiastic, but he’s a fab horse and he’s been a fab horse for me. Hopefully he’ll continue to be — as long as he keeps enjoying himself and pulling off performances like that.”

Alex and Zagreb are one of those pairs that have been so close to a major win on so many occasions that it’s hard not to root for them to finally scoop a top prize, but as Alex reminds us, it’s all still an education.

“Zagreb’s done a lot and been so consistent, but the big wins have just eluded us,” he says. “Whether that’s just him or a little bit of my inexperience — after all, everyone must remember that I’ve only been at this level for three or four years, and I’m still learning. I’m always learning about him, too — he’s a very different horse, being so tall, and not so easy to manage as the smaller horses. But he’s educated us, and I think we’re all more knowledgable for the future, so we can continue producing any type of horse to great results. Hopefully for him, though, he’ll grab a big one before his career starts to ease off.” 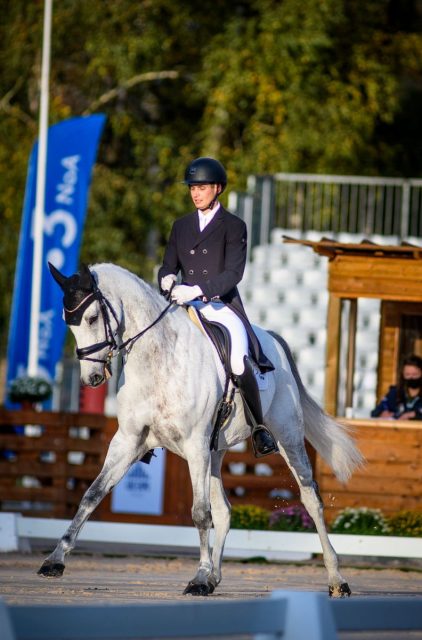 The sole German in the field, Christoph Wahler impresses in his 5* debut with Carjatan S for ninth place after dressage. Photo by Tilly Berendt.

Eventing powerhouse Germany has just one combination in the mix this year, but five-star debutantes Christoph Wahler and the eleven-year-old Carjatan S are certainly doing their country proud, delivering a 25.6 for ninth place as we head into tomorrow’s cross-country challenge.

“I think the test was alright,” says Christoph with typical German stoicism. “He did lovely trot work and was quite relaxed when he came in, which is actually the most important thing. I have to keep him calm and relaxed, because when he goes in there he’s going to trot expressively enough by himself; I don’t have to switch him on.”

Just one minor mistake — a wobbly rein-back — precluded an even lower mark and Christoph, who hails from the Klosterhof Mendingen stud near Luhmühlen and spends plenty of time working on pure dressage, is focusing on the lessons to be learned today.

“He started off with a very good extended walk for us at the minute, but got a little bit tense in the medium walk, which then came into the halt — and then for the reinback he was a little bit against my aids,” says Christoph. “But then he came back to focus in the canter work — maybe one or two changes were a little bit late, and the stretching circle could have had more stretch, but I think actually for the first time doing this test, he did alright. He can easily do a couple of points better, but we just have to get more experience at the level.”

And thus concludes the first phase at Pau, the only CCI5* event to run this year. We’ll be looking ahead to tomorrow afternoon’s cross-country phase, which begins at 13.30 local time/12.30 UK/7.30 a.m. Eastern later on. In the meantime: Go Eventing! 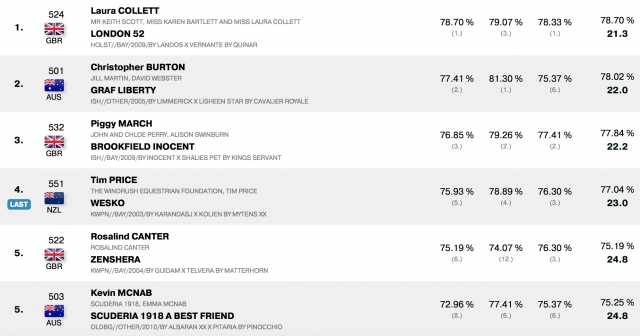 The top five at the culmination of dressage at Les 5 Etoiles de Pau.