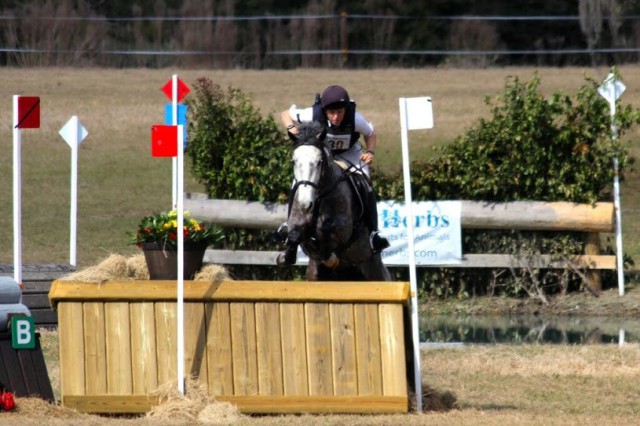 If there ever was “a horse of a different color,” Elisa Wallace certainly has her fair share. A particular gray BLM mustang mare in her barn has garnered national attention thanks to a great performance at the Mustang Magic in 2015. Now 7 years old, Hwin is making big strides as an event horse and has just made the step up to the Preliminary level.

“I never would have picked her as my event horse,” Elisa said with a laugh. “I remember my friends, who were also working with mustangs, would say, ‘That one is going to be your eventer,’ and I wasn’t so sure. But if you point her to a jump, she will always go and she really seems to enjoy it.”

Elisa started Hwin’s eventing career last year at the Novice level, completing four events at the level with three top-5 finishes. It seemed only natural, then, to challenge Hwin with a bigger track, so they moved up to Training level at Ocala in November, where they finished in seventh place.

“She’s definitely one that pays more respect to the bigger fences,” Elisa said. “When she gets bored, she will flatten out a bit, but when something gets her attention and she pays it respect you can really feel the power.”

Elisa acknowledges the big step that the move from Training to Prelim is, but she felt the challenge was well within Hwin’s, who stands just 14.2 hands, abilities. “It’s always tricky when you move one up to Prelim, let alone on a horse!” she said. “To do it on a pony, you increase your risk because you have to make the strides.”

Elisa tapped Rocking Horse Winter II as the first Prelim event for Hwin. While the course was certainly anything but soft, Rocking Horse is nonetheless known for having inviting early season tracks.

“When I took her stadium, she walked down the lines and made it through the triple easily, so I felt pretty good for cross country,” Elisa elaborated. “She’s always been pretty good about holding a line. I’ve jumped her enough that I know what she can do. The first Training level at Rocking Horse (this year) was pretty tough — it had bounce banks going up and all sorts of tough questions and she really enjoyed it.” 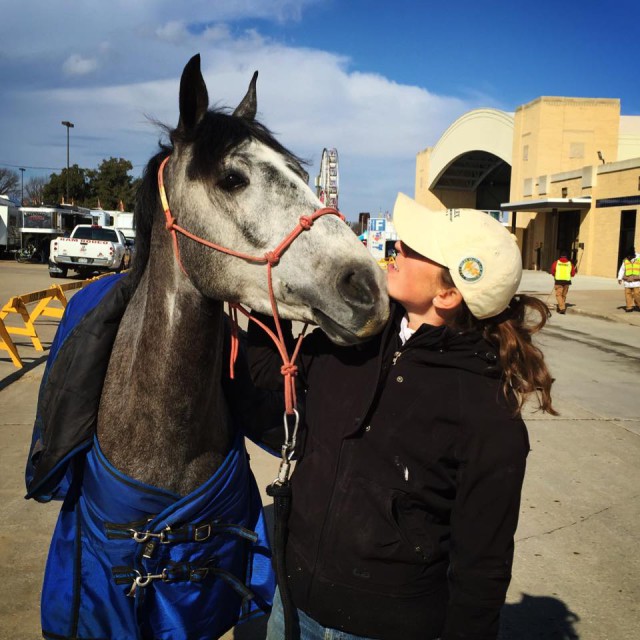 “My thought process was, if I do this pretty beefy Training course and she is sucking back and getting squirrely, then I won’t do Prelim. But she walked through it and came off like, ‘What’s next? That was easy.’ She was the least spooky she’s ever been on a course.”

So it was on to the Preliminary level for the little mustang who could, and Elisa was more than pleased with the end result. “She made the time, even,” Elisa said. “That’s the tricky thing about her, I kind of have to gallop her to keep her focused anyway but I looked at my watch and realized we’d made the time. You just never know about moving them up. You can guess, but even the bravest and scopiest horses can chicken out on you sometimes. But I felt like she was legitimate and I don’t feel like it was scary.”

The flatwork has also proven to be within Hwin’s scope as well, especially as she continues to get stronger through her body. “With her, it’s a matter of tension,” Elisa explained. “She’s scored in the 20s at Novice and Training, and it felt like it wasn’t challenging enough for her. From the (mustang makeover), I had already put a lot of that training on her which helped.”

“She can do the dressage movements, it’s just a matter of keeping her brain happy. But she is quirky like that — you have to give her a challenge to keep her happy. The biggest hurdle with her is she can go from zero to 10. Sometimes, you can ask for a leg yield and she’ll just go completely sideways. So for her it will be about smoothing it out.”

Hwin went on to finish in sixth place in the Open Prelim division at Rocking Horse Winter II, finishing on her dressage score as the cherry on top of a successful weekend.

As for the early 2016 season, Elisa plans to have Hwin tag along wherever she takes her upper level horse, Simply Priceless. This includes a trip to Red Hills and potentially Carolina International, where Hwin will run Prelim if all goes according to plan.

“I would like to get her into a CIC1* soon and maybe shoot for the CCI1* at Rebecca Farm as we are thinking of making the trip out there. There are a lot of mustang connections in Montana, and I think it would be a really cool thing to do. But I will just keep doing what she tells me she wants to do, and we will see where we go from here.”