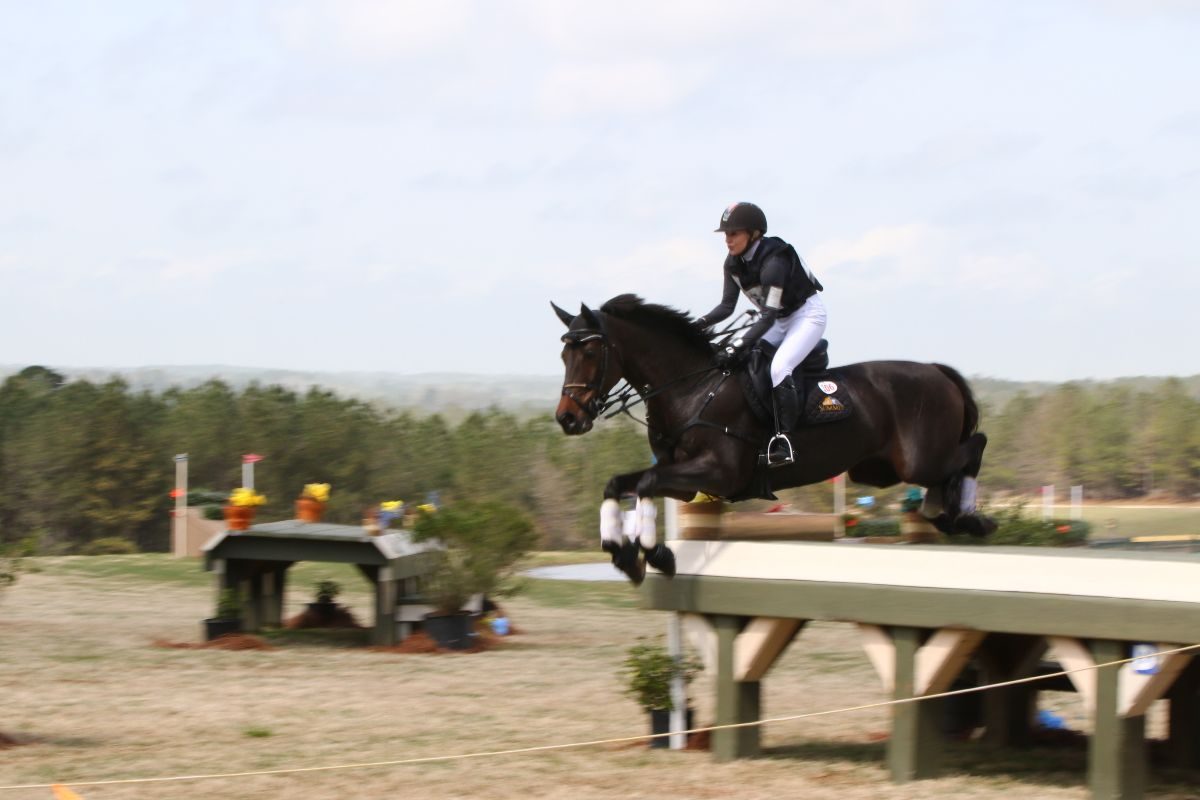 Marilyn Little and RF Scandalous ticked another box on their way to the Kentucky CCI5* this month in commanding fashion, grabbing the early lead as expected in the Stable View CCI4*-S and never looking back.

While it’s certainly no surprise to see this pair out in front early on, their biggest challenge to date has been speed across the country. Typically, Marilyn and “Kitty”, who is owned by Phoebe and Michael Manders as well as Ms. Jacqueline Mars, can give themselves a good cushion heading into the jumping phases, and now Marilyn says that a revamped warm-up routine has helped her get the 16-year-old Oldenburg mare (Carry Gold – Richardia, by Lario) that much more focused and, as a result, rideable.

Knowing the time on Capt. Mark Phillips’ track would be tough, Marilyn allowed Kitty to flow out of the start box but elected to take her foot off the gas a bit for the combinations, choosing to navigate home safely and confidently and not have any silly mistakes. The effort paid off, and the pair would win their second four-star in succession (they also took home the win at Red Hills earlier this month) on a final score of 28.5.

“I feel like she’s finally hitting her stride at 16,” Marilyn reflected this afternoon. Many may not realize that Marilyn has mostly been a one-horse woman these days; she’s preparing to launch a new nutroceutical business out of Orlando, Fl. in the coming weeks and says her life looks a lot different these days.

“As a rider, the peaks and valleys of any career are just tough,” she elaborated. “Last fall was one of those times for me. I was having a hard time adjusting to my new lifestyle, which is predominantly in the office these days, and still being sharp with my riding.”

2020, for all of its challenges with Covid, brought other hurdles for Marilyn with the loss of her longtime friend and mentor, Packy McGaughan. “He was a huge part of my support system,” she said. “When we were getting to show again in the fall, I realized what a void there was in my competition routine not having him there as my sounding board and mentor.”

The loss and the change in her rhythm caused Marilyn to lose much of her confidence, and she says her and Kitty’s competition record last year paid the price as a result. So she dedicated this offseason to putting in more work – and she says now she’s feeling stronger than ever in her partnership with the quirky mare. “There’s a lot of pressure on her as my only horse, and on me as well,” she explained. “I was hoping that if I started working in another way, outside of the horses, maybe I could get a little ahead and keep my horses and enjoy them and the sport more.”

Crediting her support team including her parents, Phoebe and Michael Manders, Ms. Mars, Karen O’Connor, and Summit Joint Performance founders Dorian and Dr. Heather Farmer, for stepping in to fill the void left behind by Packy’s loss, Marilyn says she’s feeling more confident than ever as she looks ahead to Kentucky next month. In 2018, this pair were the Kentucky USEF National Champions, finishing third. 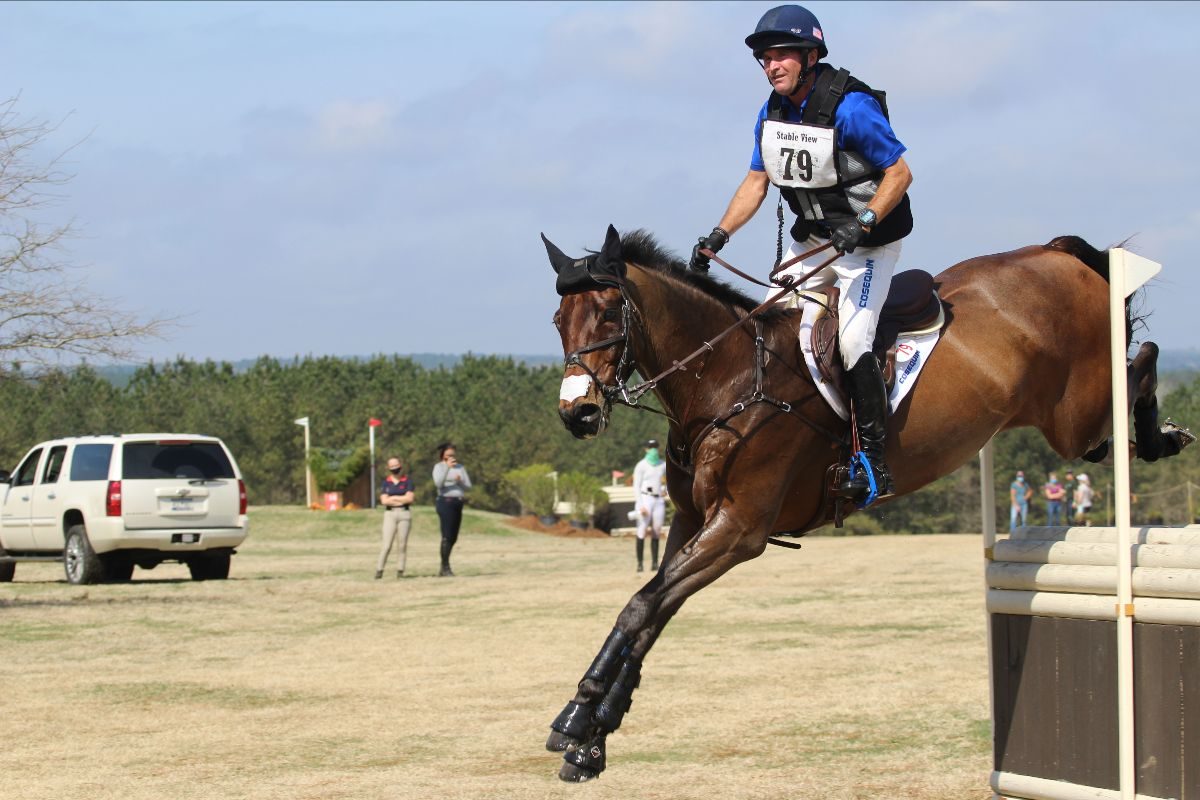 Phillip Dutton is also pleased with the efforts of his Kentucky-bound horses competing at Stable View this weekend; Tom Tierney, Simon Roosevelt, Suzanne Lacy, Annie Jones and Caroline Moran’s Z (Asca – Bellabouche, by Babouche VH Gehucht Z) finished second in the four-star on a score of 28.8 and stablemate Fernhill Singapore (Singapore – Riedellia, by Animo), owned by Tom Tierney, Annie Jones and David Vos, finished in seventh on a 39.4.

“It certainly wasn’t a very technical (cross country) course, but it was very big and forward-riding,” Phillip commented, commending the crew at Stable View for their year round efforts cultivating and maintaining the footing. “When you walked it, it seemed it was going to be on an open side, which I think is good training and practice for us.”

For Z, who’s “a very gifted and talented horse, but a bit on the hot side,” this weekend was more practice at getting the 13-year-old Zangersheide gelding feeling good using his whole body rather than relying solely on power and scope. It’s work that’s paying off, and Phillip says Z seems to really be understanding the game and has the best ahead of him yet to come. Phillip and Z will do the Advanced CT at Fair Hill in two weeks’ time before heading to Kentucky, where they’ll look to improve on their previous best finish there in 2019 (7th). Fernhill Singapore will be making his CCI5* debut in Kentucky.

Team Davidson also put in a strong effort on all accounts this weekend, with Buck finishing two of his Kentucky rides in the top five in the four-star and his students (Natalia Neneman, Allie Knowles, and Holly Jacks-Smither) all turned in solid efforts on the weekend.

Highest placed of the Davidson rides is 11-year-old Erroll Gobey (Cassini II – Ulla II by Contender), owned by Cassie Segal, Lisa Darden and Natalie Sandler, finishing the weekend in third place on a score of 32.5 with just some time added on cross country today. The Holsteiner gelding underwent wind surgery over the off-season, and Buck says he’s turned a corner this year.

“The surgery has really been a big difference,” Buck said. “No one ever questioned his physical ability, but mentally it was not always easy and when you have all that ability going in a direction, you’re not really sure which way it’s going to go. He’s just 11 this year, so I’m really excited about him. He’s finally going to the ring and doing better than he does in the warm-up, and cross country is getting much easier for him.”

Kat Cuca’s Jak My Style, a 16-year-old Thoroughbred gelding, finishes in fifth for the weekend, jetting up from 18th after dressage to finish near the top on a final score of 37.4. Jak had a bone spur removed after Tryon last fall and has come out this year feeling strong and ready. “He wouldn’t be the world’s best move, but he’s very accurate and steady and has beautiful changes,” Buck explained. Jak will also head to Kentucky next, where he’ll be seeking his first five-star completion.

Holly Jacks-Smither made a plan to leave everything she had out on the table for each FEI event she contests this year as she makes a strong bid to snag one of Canada’s individual spots for the Tokyo Olympics this summer. Thanks to some confidence boosting from longtime coach Buck Davidson and the ability to concentrate just on More Inspiration this weekend, Holly also moved up the board from early 30th into fourth overall on a score of 36.9.

“It was nice to just bring one horse and concentrate,” Holly said. “My goal this year is just to not leave anything on the table for Tokyo. Buck told me that I needed to be the best I can be every time out, and Morris was great this weekend. I can really ride him as fast as I need to when I want to, and he’s just a solid horse who does everything he’s supposed to do.” 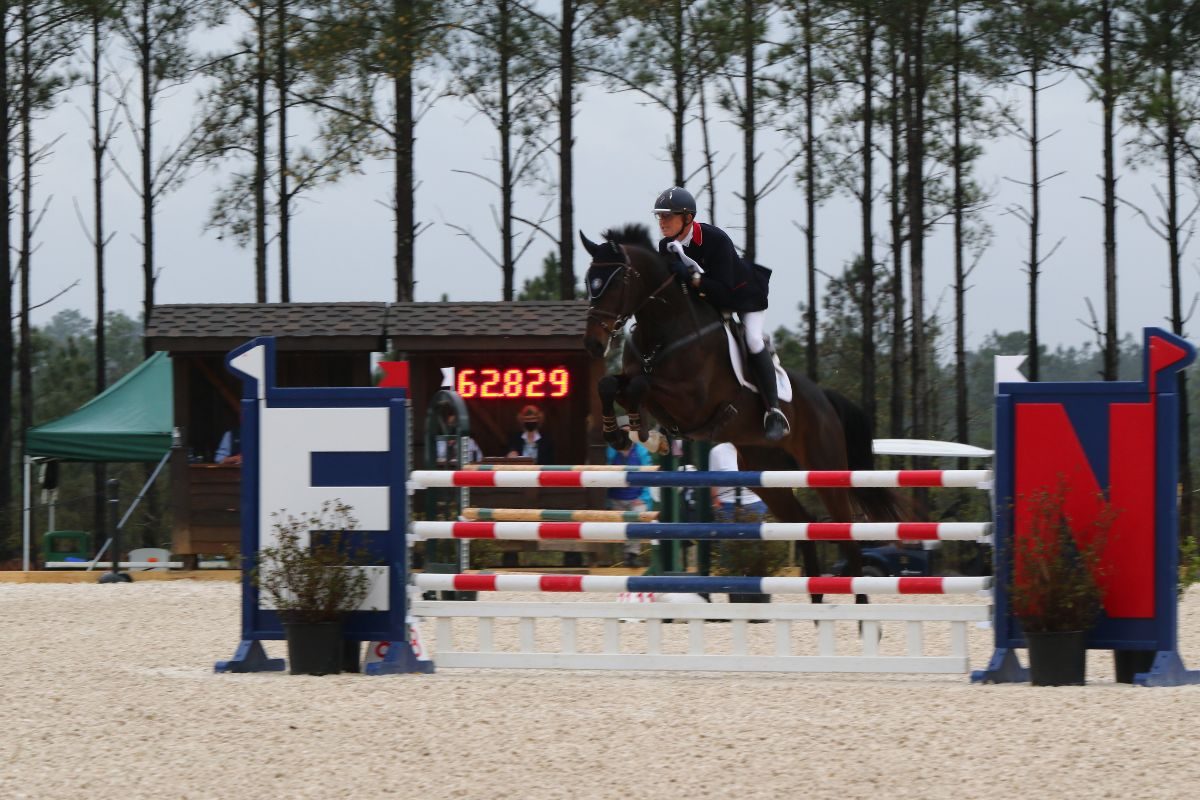 Looking to the CCI3*-S, it’s Leslie Law and Lady Chatterley who will collect another win. The USEA Mare of the Year in 2020, 10-year-old Lady Chatterley (Connor 48 – Jucy, by Mytens xx), owned by Lesley Grant-Law, Jackie Brown and Steve Brown, collects her third top placing of the young season, ending the weekend on her dressage score of 29.4. This mare is a certain one to keep an eye on as she continues her career trajectory; she’s finished in the top three in 11 of the 14 events she’s started since the beginning of 2020. 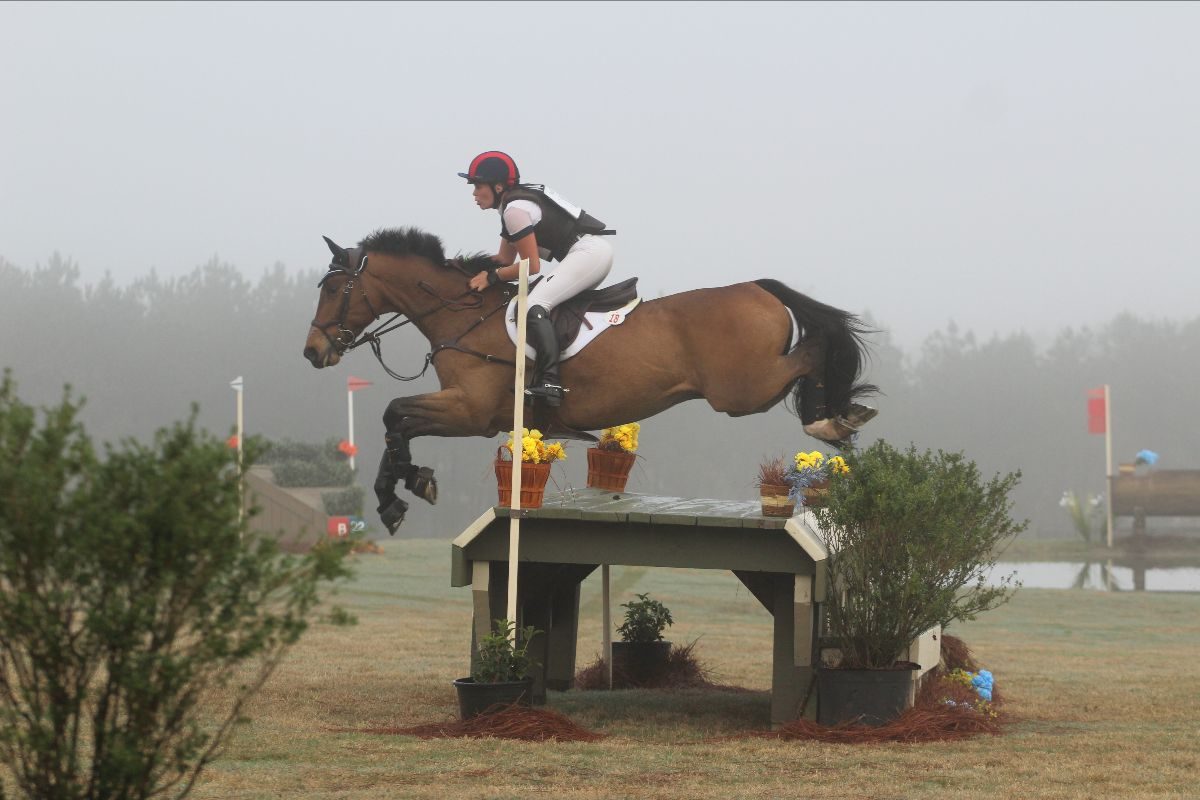 Alyssa Phillips rounds out the FEI leaderboard, winning both the CCI1*-S and the CCI2*-S on FE Celestino and Cornelius Bo, respectively. This is the ninth (!!) win in a row for 7-year-old Cornelius Bo (Concours Complet – Charlotte), and Alyssa was able to achieve her initial goal of besting her previous two-star score at Virginia last year, improving by 2.6 points with a 27.5 in the dressage. They’d go on to end on this score for a wire-to-wire win.

“It was awesome to see that he’s gotten a lot stronger since Virginia,” Alyssa explained. Another wrench thrown into the plans, show jumping ended up being delayed due to weather just before she and Cornelius Bo were due to jump. Having to wait until first thing this morning to jump – in heavy fog, no less – presented a challenge for the young horse, but he stepped up with aplomb and put in a double clear in both jumping phases.

“There was a lot of galloping on cross country, which was great for him,” Alyssa said. “I tried to build on Red Hills and get him jumping across the fences, and he really stepped up. I couldn’t have asked for more from him.” 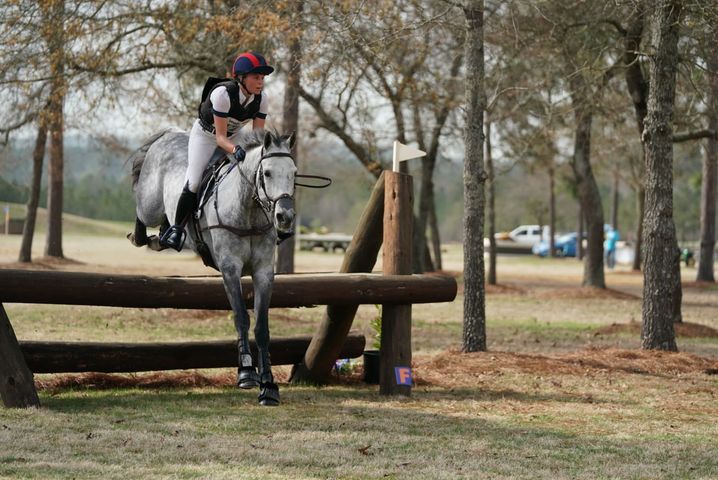 FE Celestino (Ce-Matin – Antigone), who is seven this year, has taken a bit of time to mature into his body and mind, but the one-star this weekend proved to be excellent experience and a shot of confidence for the Mecklenburg gelding. “He went on vacation this fall and came out this spring really lovely,” Alyssa said. “This was only his third show of the year, and the one-star ended up being a great choice for him. There were a lot of the same questions that the two-star cross country had, but you had some more room and time in between fences. It was a great course for him.”

Alyssa is also aiming for the CCI4*-L at Jersey Fresh with her 12-year-old Holsteiner gelding, Oskar (Coriando – Nicole, by Marlo), who finished eighth in the CCI4*-S on a score of 40.0. 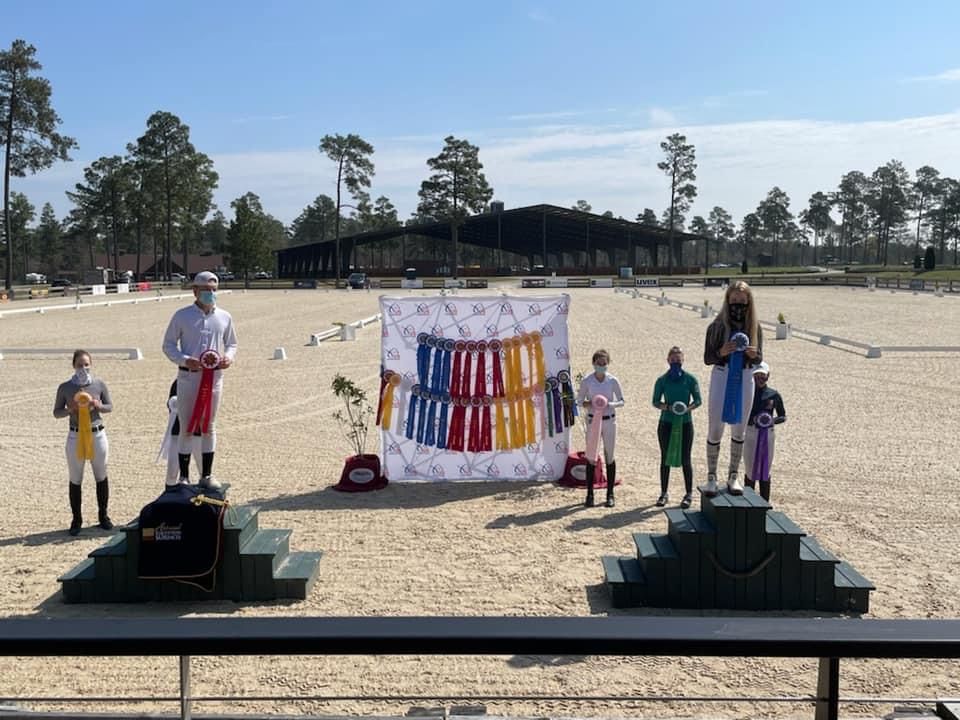 Looking to the first competition for the new Adequan USEF Youth Team Challenge, three CCI2* and four CCI3* teams competed this weekend, with Area 1 (CCI2*) and Area 2 (CCI3*) taking home the overall wins. Individually, Area 1’s Ayden Schain and Fernhill Hole Shot took home the win in the CCI2* YTC competition on a score of 30.9, and Area 2’s Isabelle Bosley and Night Quality were the individual CCI3*-S winners on a score of 32.9. We’re planning to catch up with a few of these competitors as they gear up for the circuit leading up to the year-end Youth Team Challenge championship – stay tuned for more!

Though we weren’t able to physically be on the ground at Stable View this weekend, we’d like to thank the team on the ground for their efforts to make this key spring prep event happen. We can’t wait to be there in person one day soon! Go Eventing.