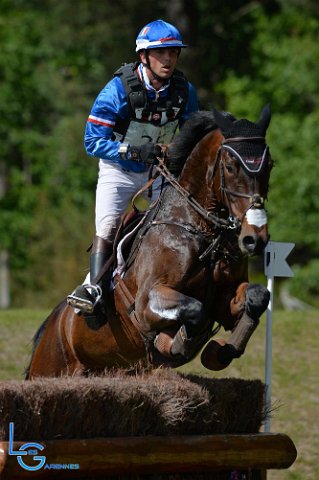 Frenchman Mathieu Lemoine and the 9-year-old KWPN gelding Bart L were victorious in the horse’s first CCI3* at Saumur this weekend in France. Owned by M. Pierre Defrance and M. Jerome Pechenard, the gelding was foot-perfect from start to finish, laying down a dressage test that earned a 40.9 from the judges, giving Bart L and Mathieu a narrow lead over second place Astier Nicolas and Piaf de b’Neville.

Although Astier kept the pressure on throughout the competition, Mathieu and Bart L kept their cool. They had the fastest round on cross country to hold their position and today jumped a gorgeous clear show jumping round with no room for error to secure their victory.

Mathieu partnered with the Dutch-bred gelding in 2013, acquiring the ride from Bertrand Vuatoux, who had competed the horse to the one-star level. Mathieu and Bart L won their first FEI event, the CCI1* at Arville in Belgium and earned the bronze medal at the Le Lion d’Angers Championship for 7-year-olds the same year.

In 2014 Mathieu moved the horse up to the two-star level, but withdrew before the final phase in the first two events. On their third try, they put all the pieces together to win the CIC2* at Sandillon in France.

They were fourth with only a rail and time penalties to add at the Breda CIC3* in the Netherlands. So in the young horse’s second three-star and first attempt at a CCI3* this weekend, he came away with a well-deserved win. 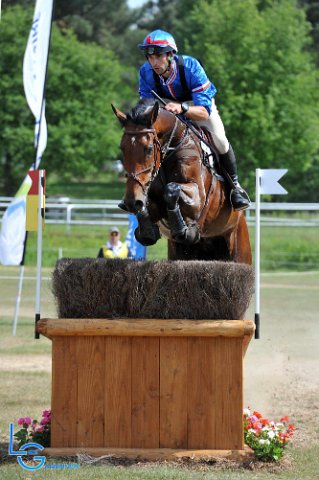 Mathieu’s countryman Astier added just one time penalty to his score in the show jumping with Piaf de b’Neville, a 12-year-old Selle Français owned by Ben et Partner. Britain’s Oliver Townend was in the hunt as well, placing fourth after dressage within a rail of the lead. He ultimately finished on his initial score for third place with PJ Hegarty’s 11-year-old Irish mare Fenyas Elegance in their second FEI appearance as a pair.

Stephanie D’Andrimont of Belgium riding Ulano de Slozen, Mark Kyle of Ireland riding Jemilla and Nana Dalton of Britain riding Abbeylara Prince placed fourth, fifth and sixth respectively thanks to clear show jumping rounds that moved them up the leaderboard. In addition to the top six, there was only one other round out of 26 finishers to leave all the poles up, and that was Andrew Nicholson and Cillnabradden Evo, who finished in 17th place.

The Saumur CIC2* had a huge division of 65 starters. Karim Florent Laghouag (FRA) and Entebbe de Hus, a Hannoverian gelding owned by Madame Agnes Celerier and M. Michel Duros, were the winners, having moved up from third after a clear show jumping round, which was done before the cross country in this division.

Two other Frenchmen joined Karim in the final press conference for the two-star. Second place went to Arnaud Boiteau and Didier Dhennin, both of whom finished on their dressage scores.

Click here for final CCI3* results and here for final CIC2* results. You can visit the Saumur website here and catch up on the weekend action on their active Twitter page here.