Intrigued by a photo of a British foxhunter with smoldering eyes and apparent ice in her veins, Leslie Wylie reached out to its subject, the Lady Martha Sitwell, in hopes that she could arrange for an interview. One thing led to another, which led to Martha inviting Leslie to come hunting with her in England (see Part I, “How I Got Invited to Foxhunt with British Royalty,” here). In part II the story of their epic weekend begins. 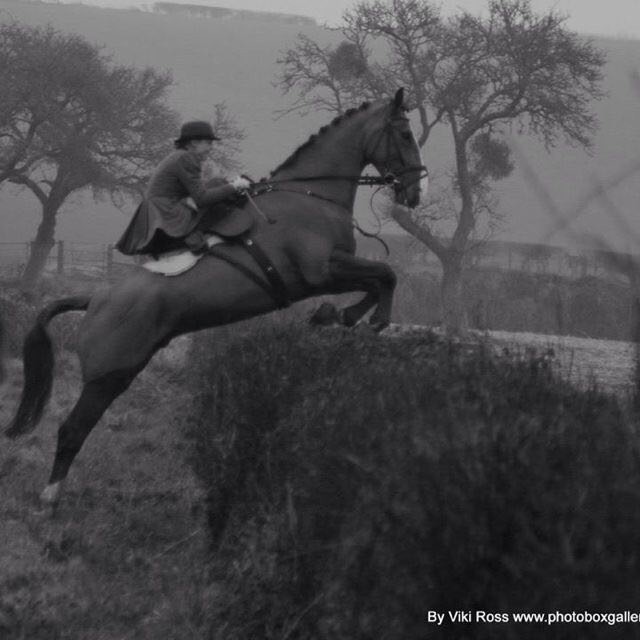 When the American guest-of-honor arrives to a dinner party over an hour late accompanied by a complete stranger from whom she has hitchhiked a ride, most people of a certain social stature wouldn’t be amused — and understandably so. But the Lady Martha Sitwell does not fall into the category of “most people.”

To rewind: The hosts of last Friday’s Ledbury Hunt, the Leekes, very generously invited Martha and I to stay the night at their Manor Farm in Tewkesbury, Gloucestershire, so we’d be on-site for the ride the next morning. I was coming in from London and, because I am logistically challenged, I caught the wrong train and dug the hole even deeper by getting off at the wrong station.

Disembarking from the train, I knew I was in trouble. The other passengers quickly scattered, leaving me alone on the dark platform in the middle of nowhere with two suitcases and a useless cell phone. The only human remaining was a railway worker in reflective trousers who was salting the platform. He noticed me looking bewildered and inquired where I was going.

“I need a cab to Tewkesbury,” I told him. “Is there a phone around?”

“Tewkesbury? That’s half an hour away!” he exclaimed, clearly mystified at how I’d ended up at this station. “It will cost you a fortune to get there and you’ll be standing here for hours waiting to get picked up. I’m just finishing up… how about I give you a lift?”

My husband later pointed out that this is a popular one-liner among rapists and murderers. But at the moment I was late, shivering and limited in my options, so I figured what the heck. Which, my husband also noted, is precisely the sort of attitude that gets people raped and murdered.

The railway worker, “Richard,” grabbed my suitcases and led me out to his vehicle, which was — you guessed it — a white van. With a shovel in the back. This is it, I thought. This is how it ends.

But Richard turned out to just be a really nice, big-hearted guy. Along the way when I mentioned that I’d never actually met my hosts face-to-face, he gave me a big-brotherly lecture about stranger danger, oblivious to the irony of the situation. When we finally arrived at Manor Farm, I sighed with relief and invited him in for a drink despite the fact that it was neither my house nor my dinner party. It just seemed like the least I could do as a thank-you for not disappearing me from the face of the earth.

Walking into the house, heroic plebeian in tow, I heard Martha’s impassioned, husky voice before I spotted her in a circle of women. When she saw me she rushed to give me a hug, squealing as though I was an old friend she hadn’t seen in ages. I apologized for being late and explained how I’d gotten there from the station, gesturing toward Richard who’d already made himself at home with a beer.

She doubled over, roaring with laughter and approval: “Darling, you’re mad!” 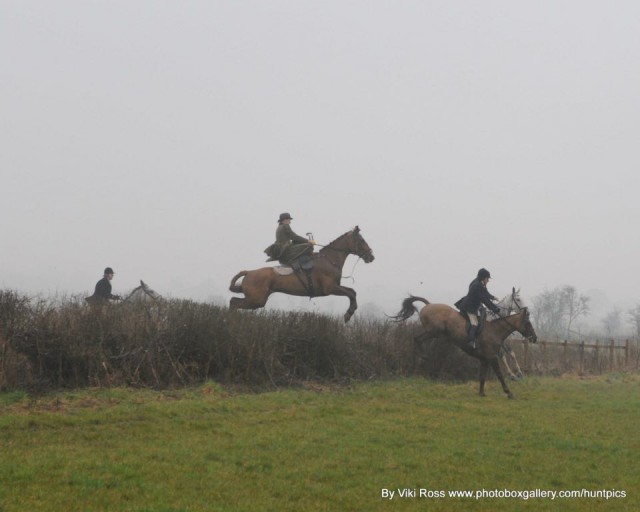 Takes One to Know One

When Martha suggested that I come run around with her for a few days, foxhunting and attending black-tie balls, it wasn’t so different from my decision to get in that stranger’s white van. She didn’t know whether I could ride my way out of a paper bag when she got me in as a guest with the infamously madcap Ledbury Hunt or whether I could hold my own in haut monde social situations. She simply opened the door of her life and invited me in.

Such bravery doesn’t come naturally for most of us, but even Martha has had her run-ins with insecurity. She grew up in a family of snow skiers but was unable to muster any trust in her ability to navigate the slopes.

“It’s dangerous!” she says. “With equestrian there are two brains figuring out the same thing, the horse being right much of the time, but you can’t to that with skiing. You’ve got to be responsible for yourself.”

In lieu of skiing young Martha gravitated toward horses. She’d always been the sort of girl who would have slept in her jodhpurs given the choice; for her, then and now, riding was a grounding experience in an otherwise whirlwind life. “You can’t think about anything else when you’re doing it,” she explains.

Or course riding, if not more treacherous, is certainly no safer than skiing. At age 14 Martha broke her neck and back in a bad crash, “a spectacular belly-up on a young horse.” The incident put a damper on her riding for several years until she decided to re-approach the sport at age 26.

Martha took up foxhunting, largely as a way to make friends at a time in her life when she was feeling rather alone. Hunting is among the most social of equestrian sports, the community becoming a family cobbled together by shared experiences: breakfasts, balls, thrills, spills and shared hip flasks in the field.

Getting her groove back in the saddle, however, proved difficult. “I really struggled to regain my confidence,” Martha says. So she did what any completely irrational horsewoman would do: she took up sidesaddle. Because if two legs aren’t enough to make you feel confident, just one leg is even better, right?

“It is in my world!” Martha declares. “You can go cross country sidesaddle as well as any astride rider if you have the right horse.”

As it turned out there was a sidesaddle trainer just 20 minutes away from Martha’s home so she and a friend took up with him to learn the ropes.

Modern sidesaddles have a two-pommel design. There’s the upper fixed head, which supports the right thigh of the rider when it is lying across the top center of the saddle, and the leaping head, which lies below the first on the left of the saddle. Martha explains that when riding, the left leg should remain fairly dormant with all the grip coming from the right leg. You want to think about keeping your toes pointed toward one another, she says, left heel down and right heel up.

“You don’t want too much contact with the leaping head,” Martha explains. “In an emergency you can clamp your legs but you wouldn’t want to do it jumping because it spins you out.”

According to Martha, when positioned correctly it’s almost impossible to fall off. “I actually thought it WAS impossible until I got Harry — he’s got a really clever ‘you’re boring me’ flick, an ‘I want to go faster’ flick.” 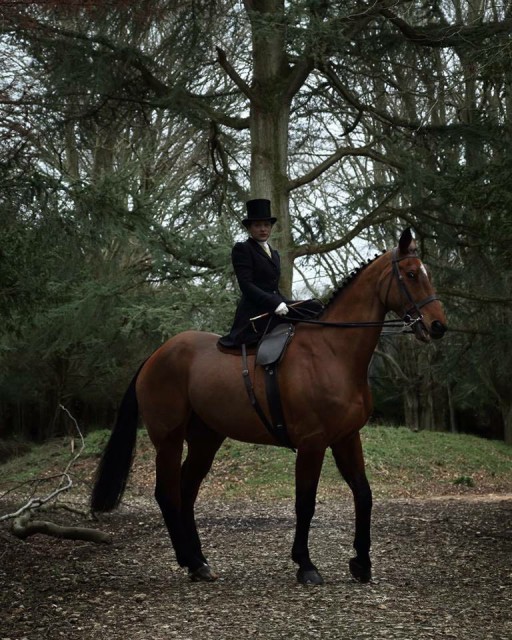 Of all the horses Martha has trained to sidesaddle over the years, she’s only encountered a couple who didn’t take to it. Most horses, she says, actually seem to enjoy the experience.

“They know they look pretty,” she says. “They arch their neck and point their toes, like ‘Look at me!'”

Although when we ride out with the Ledbury tomorrow Martha will be hunting astride, as we’ll be on hired horses, her reputation as a cornerstone of the sidesaddle renaissance precedes her. Over the years riding sidesaddle, and especially hunting sidesaddle, has become a dying art: “People were riding sidesaddle but they were just trotting around the show ring — walk, trot, canter on each rein and that was all.”

But Martha, along with a determined assemblage of sidesaddle enthusiasts spanning the U.S. and the U.K., have worked hard to bring the tradition back into the spotlight, organizing competitions and charity rides. Martha’s most famous sidesaddle exploit may be her nearly month-long ride across Mongolia in 2014 to honor her deceased sister’s memory.

With the hunt beginning at 11 a.m. and a gathering for drinks aka “courage” beforehand, the last of tonight’s well-fed and lubricated dinner party guests shuffle off to bed at half past midnight. I fall asleep clutching the quilt like a horse’s mane, imagining myself sailing over massive hedges and dark, yawning ditches with the surround-sound thunder of galloping horses in my ear….

At least we’re all mad here.