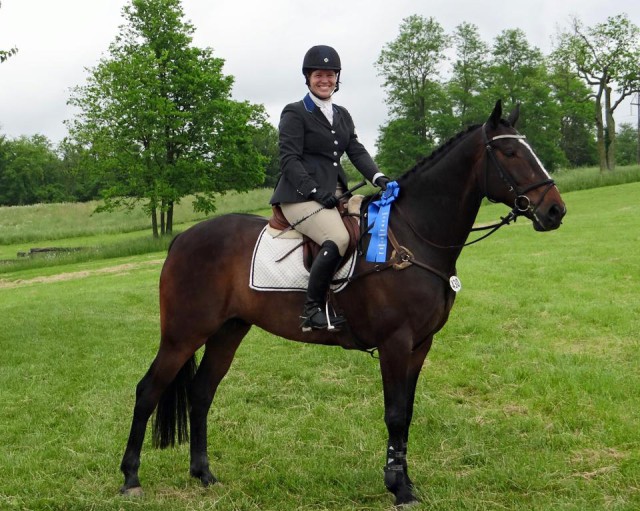 Megan Moore and Mooney Maguire after winning their first outing together this weekend. Photo by Howard Moore.

It’s not too often we see a full sibling to a four-star winner in the U.S., but Megan Moore’s most recent acquisition, Mooney Maguire, is just that. After a recent horse shopping trip to Europe, Megan found herself enamored with an 8-year-old full sibling to 2014 Rolex Kentucky winner Bay My Hero, and now she’s welcomed this exciting new talent into her program as an upper level prospect.

“We went on a shopping trip for clients and we were very successful and were pretty much done,” Megan recalled. “On the day we were due to fly out, our friends there called and said they had one more for us to look at, and that he was showing that weekend.”

Megan went and had her first look at Mooney Maguire, a towering Irish Sport Horse standing 17 hands. “I said I would love to sit on him, and we just clicked instantly,” she said. “I had been thinking of him for a client, but unfortunately they wanted a small horse so he was just too big for them. I wasn’t really supposed to be sitting on anything for myself, but I just instantly fell in love.”

Mooney Maguire (Cult Hero – Bing Power, by Tomgar Power Crest) is one of four full siblings to Bay My Hero bred by Bryan Mcguire. Sourced by Chris and Sue Ryan, Mooney competed through Prelim in Ireland before making the trip to the U.S. Mooney Maguire is the second youngest of the four. Hip Hop Hero (2005) currently competes at the three-star level with Ruth Edge, Be My Hero (2001) at the one-star level, and Mooney Amach (2008) who is aiming for the Junior Europeans with young rider Jessica Kuehnle.

Megan had the opportunity to spend some time chatting with breeder Bryan Mcguire while in Ireland, who told her the details of horses sired by the late Cult Hero. “Bryan said that (Mooney Mcguire) needs a bigger track — he needs a 1.30m track,” she said. “He’s not the most extravagant horse over smaller fences, but I get the feeling that I would want to be cantering down to a big fence on him. I feel that often the really good horses aren’t necessarily the best at the lower levels, and he’s not enormously impressive but he gives me a great feeling.” 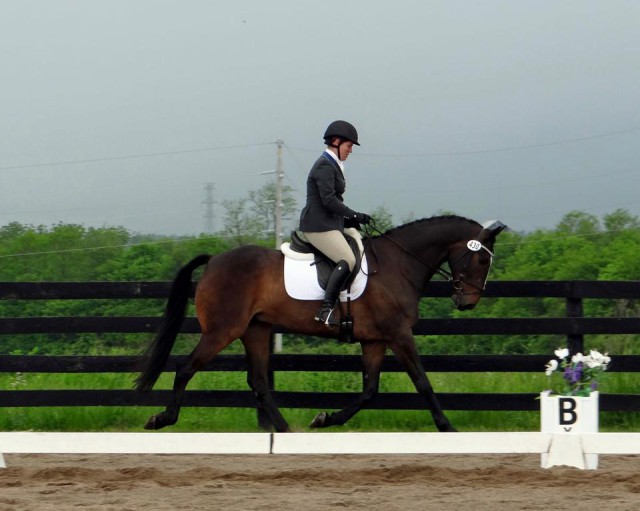 Megan and Mooney Maguire in their first U.S. outing together. Photo by Howard Moore.

“Bryan also said Cult Heros really come into their own at age seven,” she continued. “They’re not really ones to do the young classes on because they tend to mature a bit later.”

Mooney does have a smattering of show jumping rails marring an otherwise clean record featuring no cross country jumping faults. Megan is up for the challenge, however, and she and Mooney proved how well they clicked by jumping clear in their first CT together this past weekend to earn his first U.S. blue ribbon.

“I’ve had some experience fixing (a high number of rails in show jumping), and I love working with quirky horses, which he is,” Megan said. “Cult Hero offspring are said to be a bit quirky and spooky, but I don’t like to be bored. I have very high aspirations for him.”

Megan will now spend some time cementing her new partnership before she plans to bring him out at Prelim next month. “I’m going to play it by ear. He’s settled in beautifully and we just get along like peas and carrots. I just need to get him out cross country schooling to see where we’re at. I’m really excited about him. He’s going to be one of my top horses coming along.”

Megan’s father, Howard Moore, stepped into bring Mooney Maguire to the U.S., an opportunity for which she is immensely grateful. “I’ll be selling some horses or putting together a syndicate to pay him back,” she said. “It was incredibly kind of him. This is the first time I’ve ever had a horse that knew anything — we’ve always broken our own or started them off the track, so this is a new experience for me. He was beautifully produced, so we just got very lucky that we happened to stumble upon him.”

We’ll be following Megan and Mooney as they progress with their partnership, but suffice it to say we’re excited to see what the future holds for this pair. Welcome to the U.S., Mooney!