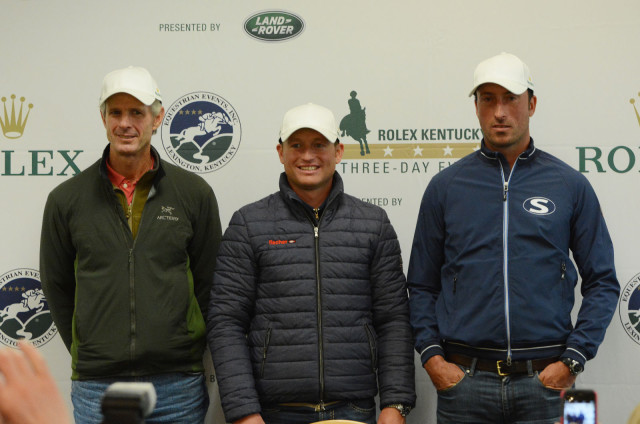 It was a full press conference this afternoon at the Rolex Kentucky Three-Day Event, with not only Tim Price and Michael Jung in attendance but also Will Coleman, recipient of the Land Rover Optimum Time award, as well as course designer Derek di Grazia.

Especially given the conditions today, I think we were all on the edge of our seat holding our breaths while the competitors started off on the course. As the day went on and the footing deteriorated, tensions were high but we’re pleased that everyone is back in the barns safe and in one piece.

This is a huge testament to the skill with which Derek di Grazia designed this course, which has received praise all weekend from riders and spectators alike.

“I think that yesterday we were obviously worried about the weather … finishing before the thunderstorms was something we were concerned with,” Derek said. “At the same time, I think once we started the day, it was great having the first horse out go around clear inside the time — that always makes you feel good. We had some great rides, and it was a really good day for the sport I believe.”

The top riders echoed Derek’s sentiments, acknowledging the conditions but quick to compliment the maintenance of the footing and the way their respective horses handled it.

“The ground was not very bad, not very deep,” Michael said. “It was going to be a track of riding well and using your intuition, and a great job was done with all the takeoffs and landings so it felt very safe and secure. I trusted (Sam) and just tried to give him a good trip between the fences and take each fence as it came.“

How about that one second over the time for Michael and Sam — was he upset? “No … yeah, ok, maybe a little,” he quipped. “But I’m very happy with my round because Sam had a longer break last year — the last competition was in Aachen last year and this was the first very big competition and he gave me a very good feeling. He’s 15 years old now, but you feel like he’s a young man; he’s very strong and galloped very easy so I’m very happy.”

Tim Price, who now holds the lead by the skin of his teeth on Wesko, said he was also pleased with how his day went, despite being held on course at length. “Basically I had to throw away the plan that I had in mind to stay very close to the optimum time and just focus on being good on the time. It was the best I could do in the situation, just try to use the break, you just have to make with what you’ve got.“

Will Coleman will take home a 2015 Land Rover Discovery Sport for 24 months thanks to his ride aboard OBOS O’Reilly being the closest to the optimum time. What are his plans for his shiny new ride? “I’ll probably get to look at it here, but I think my wife (Katie Coleman) will probably get to drive it. I’ll be lucky if I get to sit in it!”

It’s worth noting that this is OBOS O’Reilly’s first CCI4*, and Will said he wasn’t entirely sure how the 12-year-old Irish Sport Horse gelding owned by the Four Star Eventing Group would handle it. His concerns are surely put at ease tonight, and we hope Will is celebrating a successful run around a very tough track this evening.

Stay tuned for much more from Rolex!