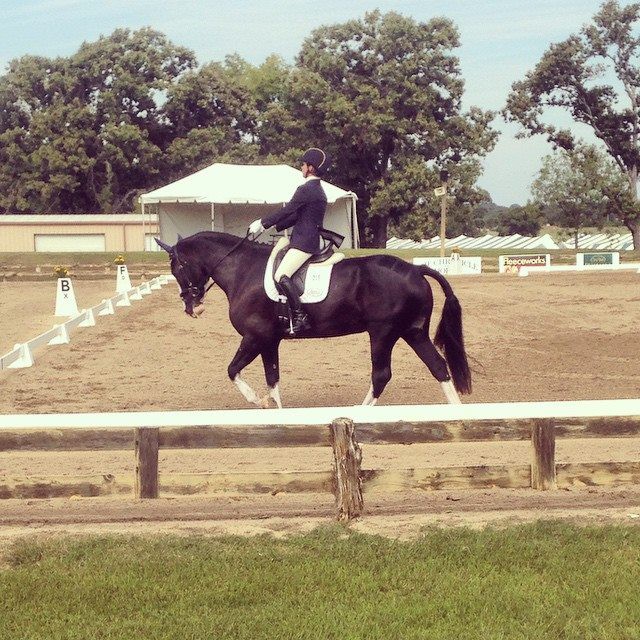 A handsome black horse trotted around the Novice Horse dressage arena on Friday, turning heads and scoring a 21.5 to take the lead in a large and highly competitive division. But it wasn’t the dressage score that meant the most to this horse’s owners and connections – it was the fact that he was here in Texas competing in the first place.

Mr. Poppers is a six-year-old Canadian Sport Horse gelding owned by Dr. Stuart Brown, husband to the late Christine Brown. Piloted by Andrea Leatherman, “Sam” represents much more than a 21.5. He represents the fond memories of a woman who loved her animals more than just about anything else.

“I met Stuart and Christine a few years ago when Christine called me and asked if I’d come and do a clinic in Kentucky,” Buck Davidson said. “I stayed at their house and I just loved them from the start. They were the most genuine, caring people.“

Christine had a strong affinity for animals, rescuing any animal she could to give it a better life at her home. “The care that the Browns put into their animals was so thoughtful, and I just admired them. Since the tragedy, Stuart and I have become very close and I am honored to call him one of my best friends now.”

After the tragic riding accident that claimed Christine’s life in 2013, Stuart had to make decisions on what to do with Christine’s horses, namely Mr. Poppers. “Stuart asked if I’d be willing to take ‘Sam’ into my barn,” Buck recalled. “I was honored that a man of his stature would have one of his horses in my barn, and we took Sam in and began working with him.”

Stuart and Christine both held Buck in a high regard when it comes to his care and love for the horses in his barn, and Stuart was confident that sending Sam to Buck for training would be what Christine wanted for the talented horse.

“Stuart is a gentle, compassionate, and classy guy,” Buck said. “They also have a racehorse that was with Graham Motion, because they had a lot of respect for him. It’s been such an honor to have Sam and represent Christine. I only hope I can treat Andrea the same way he treated Christine.”

It was Buck’s soon to be wife, Andrea, who ended up taking over the ride on the fancy gelding, and the pair has now completed five events at the Novice level this year, including the American Eventing Championships this weekend.

The Davidson camp celebrating Mr. Poppers’ impressive dressage score and double clear cross country and focused on the final phase, set to compete earlier this morning. Stuart took time off of work to come down to Texas to watch his horse compete, and it’s been a great weekend of reminiscing and laughing – what Christine would have wanted.

Andrea and Mr. Poppers lowered one rail in the show jumping this morning to take third overall. “Win, lose, or draw, we’ve still won this weekend,” Buck said. “Just to be able to have Stuart here and to see Andrea and Sam, knowing what the horse represents, it’s what Christine would have wanted. If a rail comes down, so be it. What’s important is that we’re all here celebrating Christine and enjoying the horses, and that is really what the sport is about.”