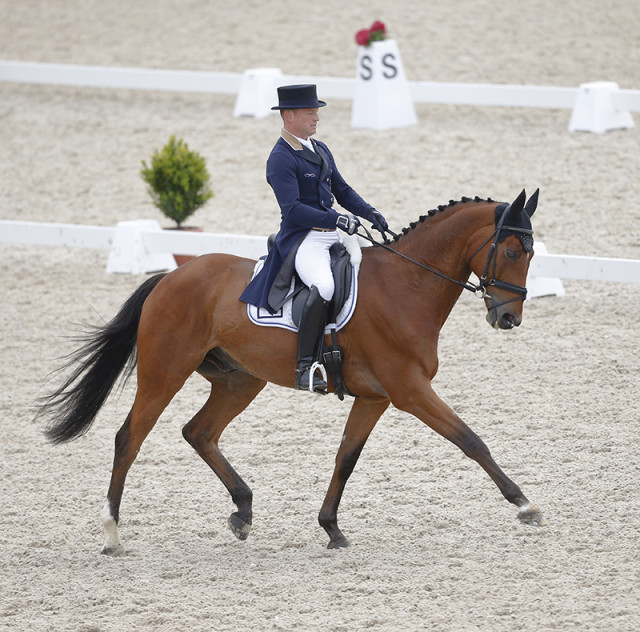 Michael Jung and Sam at Marbach in 2014. Photo by Julia Rau.

The leaderboard stacked up just about as expected after the CICO3* dressage at Fontainbleau, the first leg of this year’s FEI Nations Cup. It’s Germany’s Michael Jung and La Biosthetique Sam who will take the overnight lead after scoring a 34.1 in the dressage today.

Michael withdrew “Sam” from the German WEG team last year due to a hoof issue that came up at training camp. The 15-year-old gelding returned to FEI competition this weekend in grand fashion, and we’re quite excited to find out if Michael in fact plans to bring his superstars to Kentucky this year.

The home team French are in great position after the dressage, currently in second and third individually with Lt. Col. Thibaut Vallette and Qing du Briot (35.2) and Arnaud Boiteau and Quoriano (37.8), putting them into first position in the team competition.

Quoriano, also an 11-year-old Selle Francais gelding, finished third in the CCI4* at Pau last year and also placed third at this event in 2014. His 37.8 score today is also a low score for this horse, which puts him into great position going into cross country.

Lying in fourth place after the dressage is the Netherlands’ Tim Lips with Bayro. Tim and Bayro picked up a top-20 finish in the CCIO3* at Boekelo last year in their last FEI appearance.

Aussie rider Paul Tapner and Kilronan will take fifth place into the cross country on a dressage score of 39.6. This pair contested WEG for Australia last year, finishing 15th individually. They also finished fourth at the toughest Badminton in recent memory last year, so keep an eye out this pair to eat the cross country for a snack tomorrow.

Michael Jung is also sitting pretty with his second ride, his WEG silver medalist ride Fisherrocana FST, who earned a 40.0 for sixth place overnight. The 10-year-old mare is another who is rumored to be aiming for Rolex this year — a huge treat for those of us who have not had the opportunity to see Michael in person.

France is currently leading the Nations Cup team competition on a collective score of 123.9. Australia, the Netherlands, and Great Britain are close behind, with 10.2 penalties separating them.

A true testament to the competitive nature of this event, the top 25 pairs all scored under 50 in the dressage, which will make for an exciting weekend. Less than 10 penalties separate the top 10 placed combinations going into the cross country, so we can expect to see plenty of gas pedals being pressed on cross country tomorrow.

Fans of U.S. bred Crown Talisman will be pleased to learn that the 12-year-old gelding had a solid outing with new rider Nick Gauntlett, scoring a 49.0 for 23rd place overnight. “Tali” averaged a score of 47.1 the three-star level last year, so this is a great first effort in his debut at the level with a new rider.

It’s sure to be a hotly contested competition this weekend in France, so be sure to follow along here for updates as they happen. 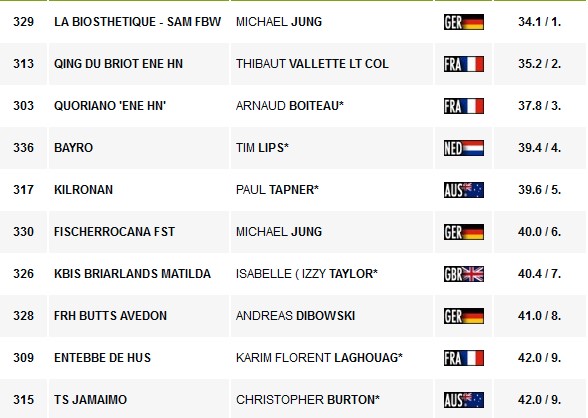