Lignières: leg six – the finale leg – of the 2019 Event Rider Masters series, got off to an incredibly exciting start as the first phase wrapped today. With fourteen of the eighteen competitors delivering a sub-30 score, the big question on everyone’s lips was this: just how low could they go? German superstar – and eventing legend – Michael Jung took it upon himself to find out.

Winning two previous Event Rider Masters legs is just one of the many highlights of the German superstar’s career. Dancing his way to a remarkable 21.7 with Wiesbaden winner Star Connection FRH, he made himself the hot favourite to take a third leg win this weekend.

“He was very nice to ride – he was very relaxed, but still with positive power,” says Michael of the eleven-year-old Hanoverian, with whom he helped the German team to the win at Aachen earlier this season. 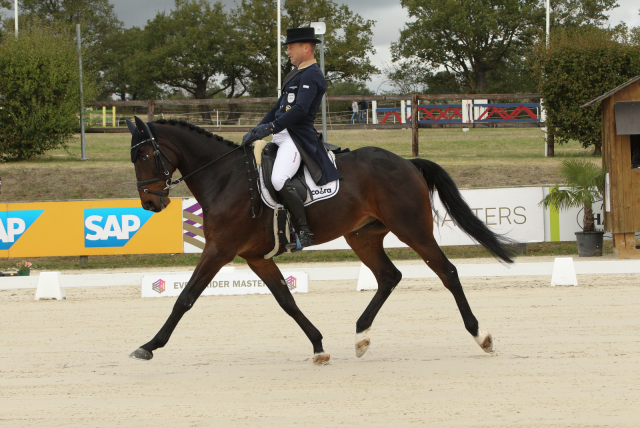 “I always have him in front of me, and so I can do as I wish,” he continues. “He’s a very easy horse; he’s a super character, and every day is nice with him – to train with him, to work with him in every discipline. He’s a beautiful horse.”

The assembled judges – Angela Tucker (GBR) at C, Nathalie Carrière (FRA) at M, and Andrew Bennie (NZL) at E – agreed, allowing him a margin of just over a second to take into tomorrow’s jumping phases. 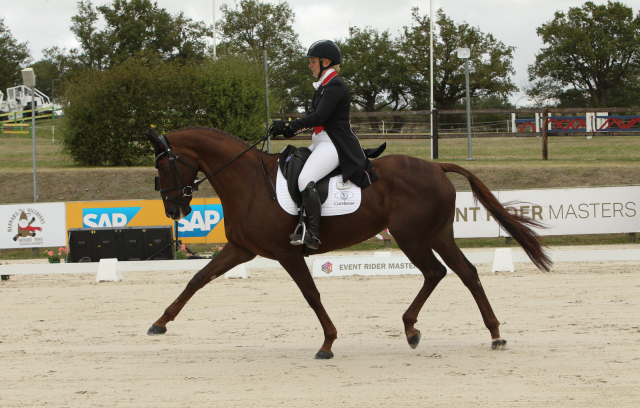 Tight margins were the theme of the day as combination after combination delivered well below their predicted marks, pushing the dressage average of the field down into its lowest-ever territory. Second-placed Gemma Tattersall certainly contributed to the quality of the field, posting a 22.3 with fiery mare Jalapeno III, a new ride for her this year.

“I feel like we’re actually starting to get the hang of each other now,” she explains – and it certainly showed in the ring, where she was able to take calculated risks and push for extra marks in her medium and extended movements.

“We’ve been pushing for this score for a while now, but have made mistakes that have dropped us to 25 or 26. She’s been beautifully produced by [former rider, Belgian team member] Karin Donckers, so it’s just been about getting to know each other, to be honest.”

The showjumping phase, Gemma admits, is still “a work in progress –  but we’re getting the hang of it!” With a five-star debut with the horse on the horizon at Pau, Gemma confirms with a smile that she’s here to be competitive. 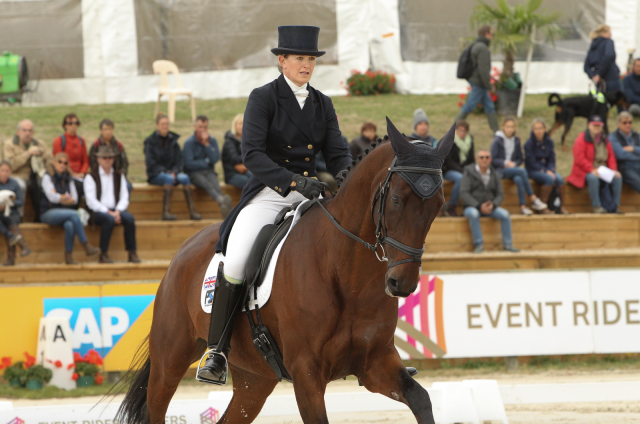 So, too, is Sarah ‘Cutty’ Cohen who, with long-time partner Treason, is one of the ERM’s most familiar faces. Sitting in fifth on the 2019 series rankings Sarah, who finished third on 2017’s leaderboard, needed to produce her very best to gain valuable series points, and that’s exactly what she did. A precise, flowing test married calculation with exuberance, and Treason showed off all his gears to cruise to a score of 23 – the horse’s best-ever international mark.

“I thought, ‘well, it’s the last event of the year – we better give it our all!’,” laughs Sarah, who hopes to bring the seventeen-year-old gelding back for one more season of ERM legs.

“He was awesome in there – he’s Mr. Consistent,” she continues. “The little bit of atmosphere gives him a lift, so I just have to control the balance and control the power. He’s such a star and he looks so beautiful, thanks to [groom] Tammie. But there’s a lot to do tomorrow!” 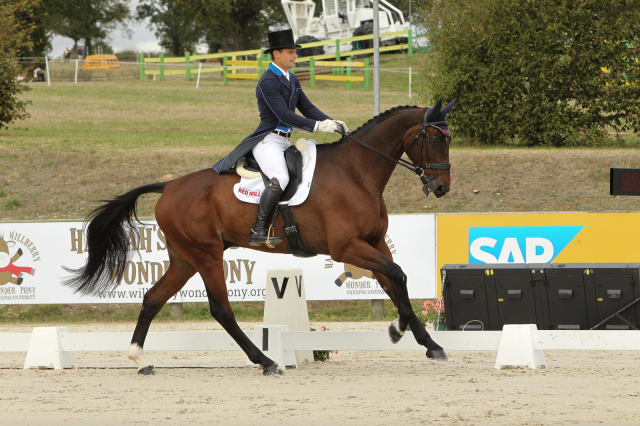 The last combination of the day delivered a 24.5 and “a happy face, today” – and Alex Bragg and Zagreb will sit in fourth place overnight as we head into tomorrow’s jumping phases.

“The horse did great,” he beams. “He was a little bit sharp in the changes, which probably cost us a couple of marks, but I’m thrilled and happy going into the jumping phases. I love jumping here.”

The secret to Alex’s success in the ring, he confides, is a love for the performative aspect of the competition – and also a sincere belief in the system.

“You’ve got to believe in yourself, and believe you’re going to be on the podium,” he says. “Is it obvious I love it up there? I love all that bravado – it’s what I ride for. I won’t give up without trying.”

But although we saw some remarkable personal bests – including that of France’s Maxime Livio, who sits 5th on a mark of 25.1 with Api du Libaire in just their third month together – we also witnessed disappointment for some of the best in the field.

Tim Price and Ascona M were projected to lead this phase on a low-20s mark, but a disagreement in the rein-back caused the occasionally quirky mare’s tension levels to boil over, affecting her marks through the middle of the test. But some expert riding from the Kiwi, and the natural pizazz of the horse, salvaged enough marks to score a respectable 27.4 for sixth place.

“I’ve always said that she’s extreme, and she can be incredible,” says Tim, who comes to Lignières with designs on the leg, though not series, podium. “[Ascona M] is going to Pau in around three weeks, and so I think the fitness is there for her! She feels amazing, but keeping it all bottled up for a dressage test is difficult. I’m happy to claw that kind of score out of her – she’s very capable, and could be up there with Michi [Jung], but you’ve got so much to deal with in an event horse. They’ve got to be dynamic in so many ways.” 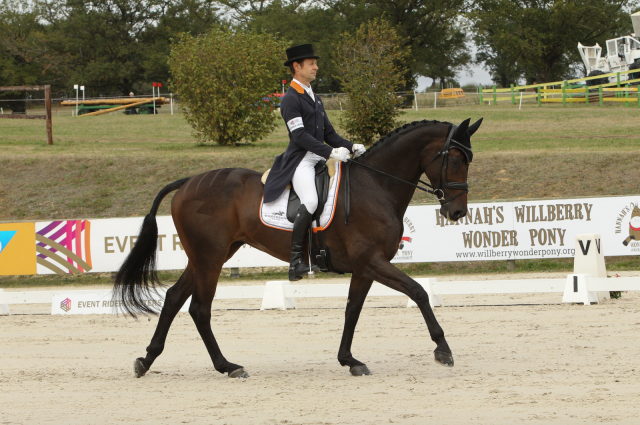 Current series leader Chris Burton also faced disappointment in the ring when Quality Purdey, too, felt the effects of the atmosphere. After a costly mistake in the extended canter, she began to tighten up through her back, skipping through changes behind and disengaging throughout the canter work. Despite this, they managed to finish on a mark of 30, which sees them in 15th place overnight.

“These ERM guys must be putting the pressure on,” he quips, explaining: “she was quite good this morning, but then she got a bit tired and wouldn’t let go and just breathe. But hey – there’s still a lot more to come, and now we just have to keep doing our job. We need to keep all the fences up, stay between the flags, and try not to knock any pins.” 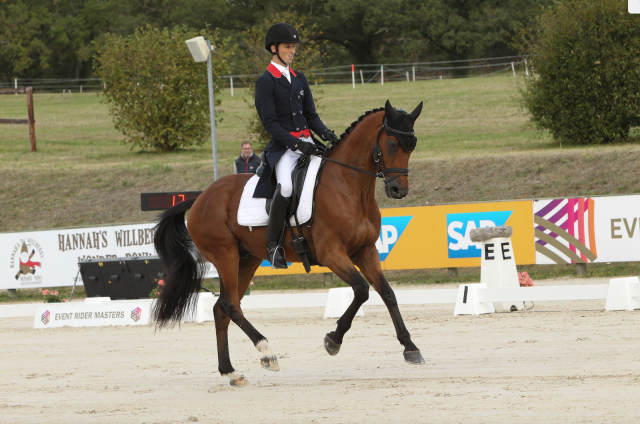 Chris’ five-mark margin in the series rankings may seem unassailable when you consider his expertise across the country, but he faces close and fierce competition from Jonelle Price and Gireg le Coz, his nearest rivals for series glory.

Though Jardy winner Gireg le Coz sits just five marks behind Chris, he and Aisprit de la Loge (29.3, 13th) weren’t quite able to stay ahead of Jonelle Price and Grovine de Reve, who posted a personal best of 28.5 for equal eighth. But that PB came despite some difficulty in the ring, which began before the bell rang and trickled into the start of the test, too.

“You mark these things yourself, really, and I didn’t have the best ride this morning – he was a cheeky brat, actually, but he put his best face on,” she explains with a laugh.

So where does today’s action put our series contenders? Well, if the competition were to finish on the leaderboard as it stands, it would be all change – Sarah Cohen would take the top spot for 2019, while Jonelle Price would finish second, and Chris Burton third. But this is the Event Rider Masters – and it’s never over ’til it’s over.

The 2019 series finale continues tomorrow with the showjumping phase, which takes place in Lignières’ atmospheric main arena. With less than a pole separating our top five – and then just a pole covering sixth through sixteenth – the pressure will be dialled up to eleven.

After that, our competitors will head onto the tough cross-country course. With 34 efforts to cover in a 6:55 optimum time, the time is certainly gettable – but the dynamic track, which wends its way across the racecourse, doesn’t leave any margin for error. With dimensionally massive rider-frighteners intermingled with acute accuracy questions, it includes a variety of the toughest questions we’ve seen throughout the season.

You’ll be able to tune into the free live-stream throughout the action – just head to eventridermasters.tv or to the Event Rider Masters Facebook page to follow all the excitement.
GET INVOLVED
Want to take a deeper dive into the world of ERM? Make sure you download EquiRatings Stacks, the high-stakes prediction game that can win you an iPad. Want to get ahead of the competition? Head over to the Prediction Centre to see how your favourites stack up against the competition. Then, jump into the SAP Spectator Judging app to see how you fare against our experienced panel of judges and to gain valuable Fan League points.