“I’m really super pleased with how he ran today,” Colleen told EN. “The course rode really well and he is just a delight to run on cross country. Morven Park did an extraordinary job on the footing for as dry as it has been here.”

Colleen and CR led the dressage with the only sub-30 score of the division, but slipped down to 7th after pulling two rails over a tricky Chris Barnard-designed show jumping course which saw 50% of the division’s competitors pull at least one rail. Similar to their run at Plantation, Colleen says she didn’t go out on course today looking to make time — but CR did anyway — and they turned in the only double-clear cross country round of the division to clinch top honors.

It’s been an exciting lead up to their targeted fall season finale at Fair Hill for Colleen and her homebred. Today’s win marks the pair’s second CCI4*-S in a row, after the pair also topped the leaderboard at Plantation Field International last month, and CR’s fourth win at the level in his career. Three of those wins came at this event in previous years, including the inaugural running of the CCI4*-S in 2014 and again in 2017. Today’s win also marks their fourth top-three finish in a row.

Allie Sacksen and her own Sparrow’s Nio, a 16-year-old Connemara/Thoroughbred (Grange Finn Sparrow x JB), flew into second place with the second fastest round of the day, moving up from 14th after show jumping.

“Nio felt super in all three phases. I’ve been working all season to get quicker on cross country and attack our dressage and show jumping phases which he really exemplified this weekend,” Allie said.

“I’m heading to Ocala in November and Morven was a great prep for that. I haven’t been to Morven in a few years, but there have been huge improvements and it was an absolutely stunning venue and weekend for the Area II championships.”

At the conclusion of show jumping, Phillip Dutton held the first and second positions with Z and Fernhill Singapore, respectively, but withdrew both before cross country like a number of competitors in the CCI4*-S and Advanced division who elect to use Morven Park as a combined test in the lead up to Fair Hill. Phillip’s third ride in the division, the Sea of Clouds Partnership’s 8-year-old Thoroughbred gelding Sea of Clouds (Malibu Moon x Winner’s Ticket) took third place at the conclusion of the event, adding only cross country time to his dressage score.

It’s a great feeling when everything goes to plan, hoping to be sitting in the same position at Morven Park Horse Trials…

Phillip Dutton and Fernhill Pick Pocket also made it two wins in a row by winning the CCI3*-S at Great Meadow International in August and winning the three-star at Morven Park today. “Ollie” did perform a dressage test in the CCI3* at Plantation with Emily Hamel in the irons after Phillip picked up an injury during a charity polo match, but was withdrawn before show jumping.

Also similar to their run at Great Meadow was the fact that they won in a wire-to-wire fashion, adding only 1.20 time penalties to their dressage score. The 8-year-old Irish Sport Horse gelding (Chacco Blue x Bracklin Mystique) is a special ride for Phillip, as he is owned by daughter Lee Lee Jones, her grandmother Annie Jones, and Caroline Moran.

Two double clear rounds in the jumping phases boosted Charlotte Collier and her own Fidelius 35, a 9-year-old Oldenburg gelding (Fidertanz 2 x Happy Hour) and meant that they were the only pair in the division, finishing on a score of 34.4 for second place.

Third place was clinched by Abigail Niles and her own Carrick Finest Lad, an 11-year-old Irish Sport Horse gelding (Carrick Diamond Lad x Clover’s Finest) on a score of 36.4. 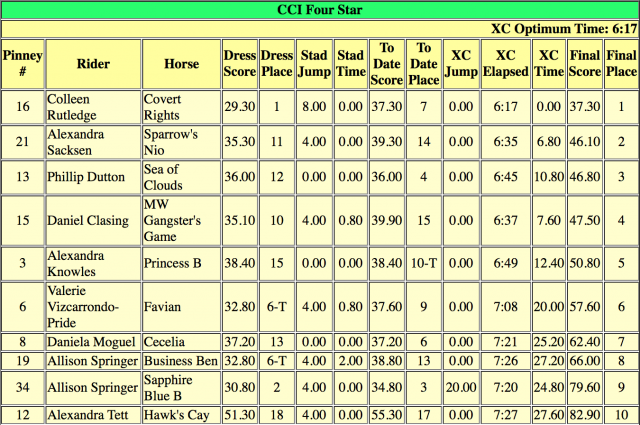 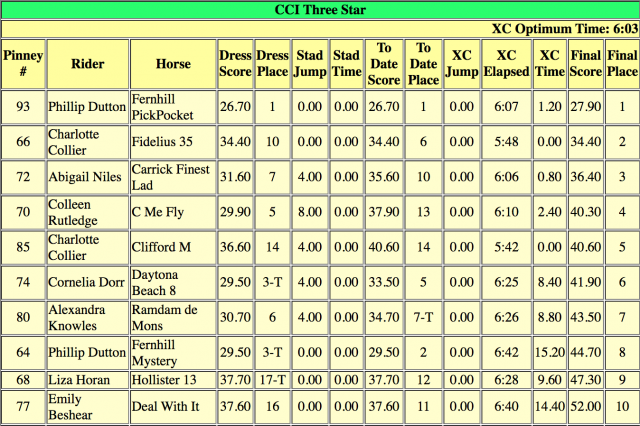