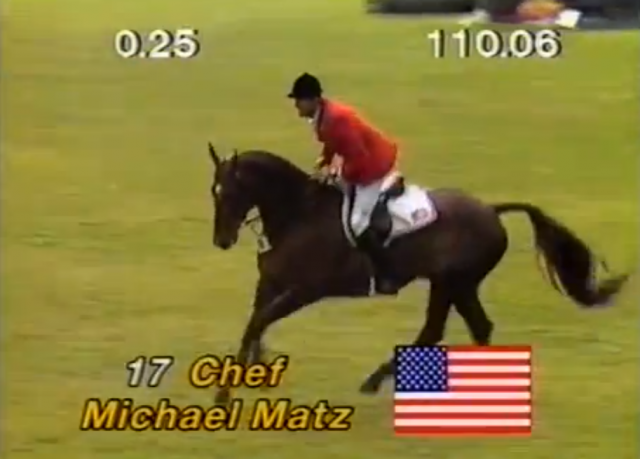 Michael Matz has enjoyed a long and illustrious career that has spanned two equestrian disciplines. A Hall of Fame show jumper, Michael represented the U.S. on several occasions, including the silver medal winning Olympic team at the 1996 Atlanta Olympics. After retiring from his show jumping career, Michael ventured into the Thoroughbred racing world, where he has become one of the most sought after trainers on the scene.

After adding so many accolades to his career as a top level show jump rider, it’s difficult for Michael to pick his favorite moment.

Representing your country is always a big honor, and that is something that I always felt proud about. It’s always nice winning, but mostly when I was riding internationally and I felt that I was riding against not only good horses here in the U.S. but other people in Europe (and other countries), that was probably the most gratifying for me.

Michael certainly spent plenty of time traveling around the world for competitions. He represented the U.S. in the Pan American Games, three Olympics, and numerous World Championships and other top tier events worldwide. A particular standout event for Michael was the 1986 Show Jumping World Championships at Aachen. The team that year consisted of Michael Matz and Chef, Conrad Homfield and Abdullah, Katie Monahan (now Prudent) and Amadia, and Katherine Burdsall and The Natural.

“I think it worked out well that everyone got along and helped each other that year. I’ve been on teams where everyone mainly looks out for themselves, but this was a tour that I really looked forward to,” Michael said. “Katherine had perhaps the best horse of the group but was the greenest rider, so we worked together to ensure that our order of go worked for everyone so that (Katherine) could go in a spot where she felt a bit less pressure.”

Michael retired from show jumping and decided to venture into the racing world in 1998. “I’ve always enjoyed racehorses, and I had to find a way to make a living. I figured I could either teach people and give clinics or buy and sell horses, and I really wasn’t a very good seller, so that didn’t look like a very profitable option,” Michael said of his decision to start training racehorses. “I didn’t mind teaching, but just didn’t see myself teaching all the time.” Once Michael began training racehorses in earnest, he discovered that the worlds of show jumping and horse racing really weren’t too far apart.

Racehorses are the same as show horses in the fact that good horses make good riders and good trainers. I had a friend arrange to get better horses because in this world you just have to find a way to get better horses. It’s an ongoing situation where you keep looking for the best to improve your string and get good quality horses.

In 2005 and 2006, Michael trained the late Barbaro to an undefeated, albeit tragically short lived, career. Michael still speaks fondly of the bay colt who stole the public’s heart. “The biggest thing is that it was so sad to see what happened and we’ll never get to know what his true ability was,” Michael said. “When he won the Kentucky Derby so convincingly, that was a great feeling of accomplishment. You had so much confidence in this horse because he never lost; you just expected him to win.” After losing Barbaro, Michael went on to train Union Rags to a victory in the 2012 Belmont Stakes, notching two Classic wins under his training belt.

I’ve often wondered how Michael’s previous experience with a different equine sport has carried over into his race training. Michael remarked that his horses were well mannered after going through his program, and he hopes that the foundation that he puts on his horses helps them stay sound for longer careers. In talking with one of Michael’s part-time exercise riders, eventer Jennie Brannigan, I also found that Michael ensures his horses enjoy turnout, something that many racehorses do not see during their careers.

What if a horse is not showing the makings of a successful racehorse? Michael is a big advocate of helping find horses second careers if their racing career is cut short.

We’ve given quite a few horses to people to continue with either show jumping, fox hunting, pleasure (or other careers). We obviously try to find them nice homes if a horse gets hurt and needs six or eight months off if the owner says they aren’t interested in putting time into the horse. We try to find a good home for them to make another career.

One example of a horse who found a successful career after racing and even breeding is Kicken Kris, who won the 2004 Arlington National before being sold to Japan to stand at stud. Once his breeding career was over, he was brought back to the U.S. and is now retraining for a new career under the tutelage of eventer Jane Sleeper. A race trainer who is such a big advocate of ensuring his horses’ safety and well-being is a vital part to the racing industry, and Michael continues to support endeavors to find horses new homes if the horses are not successful on the track.

Michael returns to his show jumping roots every now and then. His three children are now competing in the show jumping ring, so he enjoys watching them when he can and will help out with coaching if they ask. “I’ve been more involved helping them this year because they asked me to, but I let them do their own thing as much as I can,” Michael said. “It’s been fun working with them and watching them ride.”

Michael has been a force to be reckoned with in both the show jumping and the racing world, and it’s enjoyable to follow his career knowing his horses are under the best possible care and are learning from one of the best. Many thanks to Michael for graciously spending some time letting EN get to know him better.

And as a bonus, here is footage of Michael and Chef competing at the 1986 Show Jumping World Championships at Aachen: