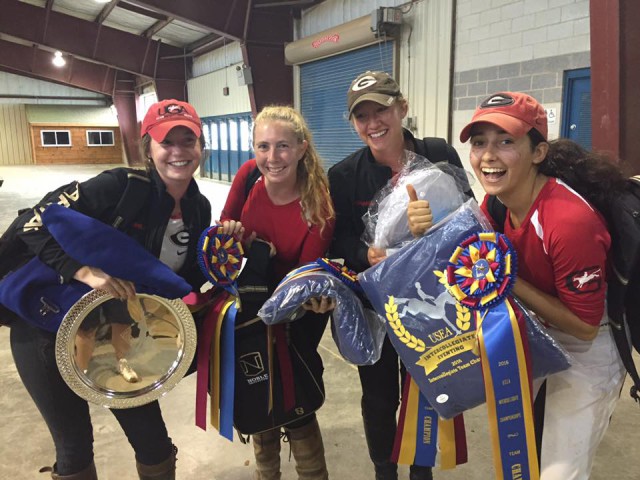 Team UGA took home so much awesome stuff for their win in the USEA Intercollegiate Eventing Championship! Photo via Eventing Team at UGA Facebook page.

The first ever USEA Intercollegiate Eventing Championship was a resounding success. With ten schools represented on ten teams, there was no shortage of school spirit, team camaraderie and enthusiasm for the future of the program. All the students and parents I spoke with were so happy to have an Intercollegiate Championship to aim for, and the rising popularity of Intercollegiate eventing is making the Colleges and Universities who are less familiar with equestrian sports start to sit up and take notice.

The Intercollegiate Program has grown so much in just a couple of short years and there are a lot of people behind the scenes who are passionate about continuing to build it up. Congratulations to the University of Georgia Red Team for the win and the whole UGA squad for winning the Spirit Award!

May-Daze at the Park H.T. [Results]

Team UGA rider Emily Cox said the team was watching the leaderboard and trying to do the math as the final scores trickled in at the Intercollegiate Eventing Championship. When they got to the awards ceremony they weren’t sure, however, whether they were first or second. They indeed were the winners, but only by a fraction of a point. [UGA Crowned 2016 USEA Intercollegiate Champions]

The Devon Horse Show is one of the oldest and largest outdoor multi-breed competitions in the United States. Established in 1896, it started as a one-day show to identify good horses for pulling carts and buggies. Today it is a well known and prestigious competition. [Behind the Scenes at Devon]

Teddy, a 19-year-old Thoroughbred, became Dr. Teddy last week when he received an honorary veterinary degree for his help teaching students at the UC Davis School of Veterinary Medicine. During a lengthy stay at the vet school, Teddy was seen for routine treatments and more complicated matters, but he also helped those students with less large animal experience get comfortable around horses.  [Horse Receives Honorary Veterinary Degree from UC Davis]

Entries for the inaugural U.S. Nations Cup leg at Great Meadow International are now open! Riders. please note that entry into this competition is different than for any other horse trial that has taken place in the U.S. This is partly do to it being a Nations Cup but also that there are a very limited of slots that will be available to riders who are not on a team. [Entry Information]

Katherine Coleman and Longwood were the top placed Americans at the Houghton International Horse Trials CICO3*, the third leg in the FEI Nations Cup Eventing Series. They added a rail to their dressage score but went double clear cross country to finish 34th. [Coleman Finishes as Top American at Houghton CICO3*]

Weekly Business Tip from Mythic Landing Enterprises: Are you ready for your own website, but don’t know where to start? Whether you are designing the website yourself, or you are hiring a professional, start off on the right foot by choosing the right domain name. If at all possible, keep your domain name as simple as possible (for example, mythiclanding.com versus mythiclandingenterprises.com). If you can’t get a short and concise domain name, then try for something more descriptive and easy to remember, such as equineinsuranceagent.com or marylandhorseshoeing.com

Eventing Nation has a Chinchilla. Devon Horse Show has … a woodchuck?