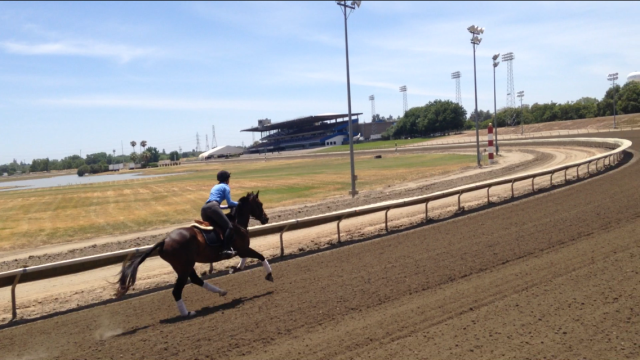 I'm not sure how we avoided getting caught, but it was the perfect end to a great weekend. Stephanie Nicora aboard High In The Air on a clandestine gallop at Cal Expo, one of his old stomping grounds.

I’m a firm believer in the notion that you should chase dreams and take risks. How big those risks are is entirely up to you. It doesn’t matter if it’s simply trying something other than your go-to selection at your favorite restaurant, sneaking on to the race-track for a gallop or rocking a very fashion forward stock tie. It is about the way that the adventure makes us grow. Find some time to get out of your comfort zone and see where it takes you.

Jockey Rosie Naparavnik suffered a shoulder separation over the weekend when the horse she was working suffered a fatal injury. She is expected to be out of the tack for four to six weeks.  [More from the paulickreport.com]

Best friends always look out for you and are often quick to loan you things you might need. Borys Kozlowski of Poland borrowed his friend’s horse to mow his lawn. After the mare had finished he was concerned about possible horse thieves so he did the only logical thing – put the mare on his balcony! [More from nydailynews.com]

The debate about how to handle mustang overpopulation is an ongoing one. The Utah BLM is moving forward with a plan to test contraception as a method of keeping the number of wild horses manageable. [More from strib.com]

How much of a hooligan do you have to be to get banned from the track for life? Apparently, officials at Leicester have banned an individual after he burst on to the track during the final furlong of the Cream Gorse Handicap. Security was able to collect the individual quickly and eject him from the property. [More from skysports.com]

Adnan Qassar has been released from prison after spending twenty one years there for winning a horse-race. In 1993 Qassar was one of the best riders in the country and the middle east. He won a race against Bassel Assad, who was in line for the Syrian presidency at the time. [More from dailystar.com.lb]

Cold-weather weight loss is often a concern for many horse owners, but what about warm-weather weight loss? Horses take about 21 days to adjust to a higher or lower ambient temperature. The research related to caloric requirements in warm temperatures is limited but provides some interesting food for thought. [More from thehorse.com]